When it comes to the joys of entertainment, visual immersion is key and nothing beats watching explosive gaming action or thrilling fight sequences unfold on a big screen, especially if the experience is further accompanied by crisp, rich audio.

It’s no surprise then, that ultrawide displays have been gaining prominence recently, as the promise of larger real estate, as a standalone or extended display, for day-to-day multitasking comes handy in many instances, from saving ourselves from minimising and re-opening different windows, or helping those carrying out detail-oriented tasks like video editing, 3D animation, and the like.

But when the display measures upwards of 40 inches horizontally, how much will that vast viewing space be affected by factors like comfort and field of view? With the Prism+ P438 Ultrawide Monitor, the answer seems to be not as significant as one might think, though the greater-than-average width is most certainly not everyone’s cup of tea.

Coming over from either a 15-inch laptop or 24-inch desktop screen, the monitor does appear to be overwhelmingly massive at first sight, as it stretches 43.8 inches across (hence its name), and features a 120Hz IPS panel with a 32:9 aspect ratio and Dual FHD resolution (3840 x 1080p).

The review unit came assembled with a white monitor stand and base right out of the box, although users may find them packed separately in the retail version. Accompanying the build are a handful of accessories, including screws, various cables for power, the display port, USB uplinking and USB-C connection, and a remote control. Hooking it up to an external monitor arm was a smooth and fuss-free experience, with the much welcome VESA mounting support allowing for more flexible positioning.

The stand is solid, sporting little to no flex when pressure is applied. Despite its slim feet, the base is stable and firm, though the lack of rubber coating would mean that the table is at risk of being scratched rather easily, so do handle the monitor with care when placing or moving it around.

Ultrawide is just one way of describing the P438, with the other being ultrawhite, which bleeds into every part of the build. The result is a clean, minimalist aesthetic that exudes a sophisticated air of elegance, especially with its near bezel-less display at the front. Because of the Prism+ branding on the bottom panel, the bar isn’t as svelte as it should be, making the uneven thickness stand out from a distance.

This lack of slenderness is carried over to the stand as well. While it’s important to have some added mass and solidity for stability, its design does appear to be a little too thick – a slightly jarring sight in view of the monitor’s largely streamlined look. The touch of classiness, as such, takes a hit here, so it’d be great if the Prism+ team can come up with a sleeker design without compromising on functionality for future iterations.

The rear is where users will find a decorative flair. As with most gaming-related devices, the P438 features RGB effects, which are presented through a horizontal light strip running along the middle. Three brightness levels, six colour options, and several presets are available, with the strip casting a soft backlight glow on the surface that the monitor is leaning against.

The attempted shift to subtlety is appreciated, but the placement does appear to be a little unorthodox. RGB lighting, after all, is meant to be a proud proclamation of the gamer identity, and those who aren’t a fan will usually disable the effects anyway, so tucking it away from one’s sight for the most part, even while gaming, defeats its decorative purpose in the first place. Integrating RGB into the sides of the panel or the stand would perhaps project a stronger, yet low-profile presence.

Accompanying the light strip is a diverse spread of ports, bringing a versatile selection for connectivity. On the left, a USB-C interface, a HDMI 2.0 and 1.4 port, a Display Port, and the 3.5mm audio jack have been included, while the right side sees three USB-A 3.0 ports, a USB-B 3.0 uplink, and a power connector. These I/O options are especially handy, as users will be able to hook up external devices, such as mice, keyboards, and speakers to the monitor with reduced interference.

The physical control buttons, meanwhile, can be found on the underside of the screen, where a rectangular bump resides. It’s a bit of a reach, however, and trying to locate their respective settings can be quite be a chore, even with the height, tilt, and swivel adjustments – a telling sign that the P438 is, in fact, a higher-tier monitor than the rest of its smaller and cheaper counterparts.

The remote control is, as such, an invaluable and extremely handy tool. With the slim, compact device in hand, navigating between different settings on screen proved to be seamlessly convenient and straightforward. There, users have a range of viewing features to choose from, including four gaming crosshair options, as well as a HDR 600 and 24-zone local dimming combination for enhanced detail and atmospheric tones.

When put to the test, the P438 excelled most in colour delivery. Prism+ claims a 125 percent coverage of the sRGB colour gamut that, while can be difficult to ascertain, seems to carry over to the actual build rather well. Horizon Zero Dawn, Hades, and Shadow of the Tomb Raider all yielded vivid, eye-catching hues, rich blacks, and strong contrast – a combination that should please content creators, especially for those who deal with colour-sensitive work, such as video editors and photographers.

The viewing experience is further accentuated by high luminance levels that reach a 600-nits peak, which does a good job of bringing out the darkest and brightest parts of the screen.

That also means that things can get a lot brighter than one is used to, which may strain the eye over prolonged periods of use, even at a lower intensity.

Screen performance, unfortunately, falls a little short of expectations. On paper, the figures are decent, with the monitor clocking a 3840 x 1080p resolution, a 120 Hz refresh rate with AMD FreeSync support, and a one-millisecond response time. The fast speeds have proven effective in delivering smooth, latency-free gameplay, but traces of ghosting are not uncommon where movement is concerned, thus sullying the overall visual experience.

The non-standard 32:9 aspect ratio isn’t exactly helpful, either. Falling between 4K resolution (3840 x 2160p) and 1440p (2560 x 1440), the graphical prowess takes a hit here with muddier textures and patchy environments, but unless you’re extremely picky with every detail that you come across, gaming on the P438 is still nothing short of enjoyable.

There are just a handful of drawbacks to note, however. As with most ultrawide builds on the market, users may find the edges of the 43-inch monitor laying too far away from their line of sight – particularly so if their attention is constantly on the middle of the screen. Coupled with the lack of height, the narrow view means less important tasks, such as monitoring the team chat or checking through the calendar, should be reserved for the corners. The rest of the screen estate, in exchange, can then be used for more important instances of multitasking.

Enjoying videos and movies on an ultrawide display is an appealing and feasible affair, but the same cannot be said of gaming. Where the likes of Horizon Zero Dawn and Red Dead Redemption 2 offer ultrawide support, there are still quite a number of titles that aren’t compatible with the non-usual standard, so gaming enthusiasts will have to make do with this compromise.

But where the P438 falters most is in its audio. Easily the most disappointing feature, its onboard speakers deliver flat, hollow sound that deals a blow to the immersion factor, with character dialogues lacking in clarity and crispness as well. Using them as the main sound source is certainly not recommended and you’ll want to invest in a decent pair of speakers or a soundbar to enjoy better quality audio.

At S$849, the Prism+ P438 Ultrawide Monitor is a more affordable alternative for those who are looking to upgrade to the ultrawide experience. While not free of caveats, it offers a decent mix of screen performance, aesthetics, and colour accuracy that should meet the needs of the average multi-tasking user – productivity, entertainment, or otherwise.

A highly-capable monitor, the Prism+ P438 makes up for its shortcomings by performing what it does best: efficient multitasking for both work and leisure. 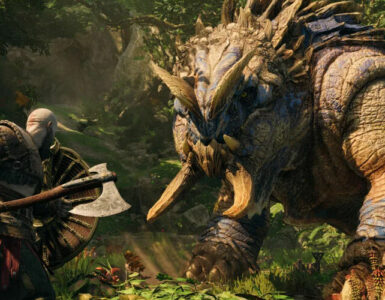