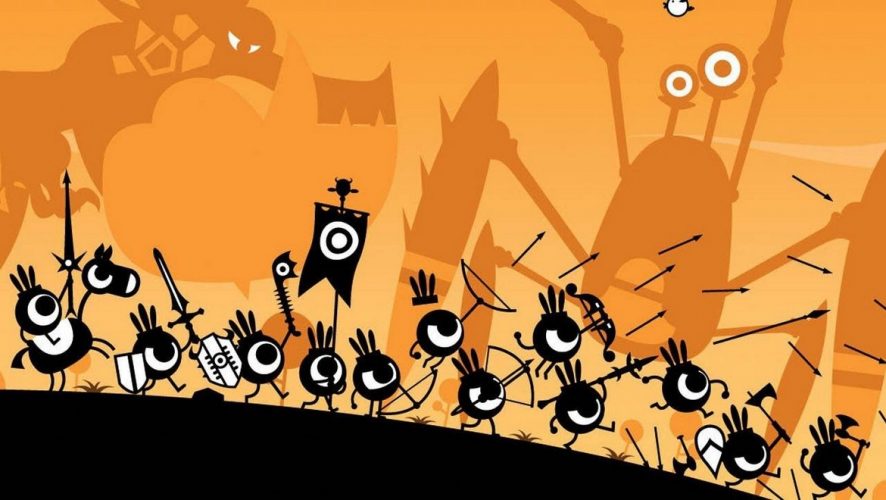 Like a fine wine that has been locked away for ages waiting to be discovered and enjoyed, Patapon Remastered, the beloved rhythm game from the PlayStation Portable years has not only aged well but also shows why a game like this can exist in the current gaming landscape. It is simply phenomenal.

If you are not familiar with Patapon, it is a hybrid between a rhythm game and a strategy experience, packaged with cute-as-buttons visuals and a catchy soundtrack, punctuated by the systematic beating of drums which you control. Cue Pata, Pata, Pata, Pon!

As a celestial deity to the walking eyeballs that are the Patapons, your duty is to guide them to Earthend in the pursuit of the mysterious “IT,” and to overcome whatever obstacles that stand in your way.

With the deadly weather, dangerous terrain, monstrous bosses, and the Zigotons, the Patapon’s squarish adversaries, all plotting your downfall, your only hope is the smart use of the various war drums that will dictate what your creatures do.

With a constant four-beat rhythm in the background and a flashing border to make things easier, different combinations of the Pata, Pon, Chaka, and Don drums will make the Patapons march, attack, defend, or run for their lives. Keep the beat going and enter Fever mode, where every action is more effective and more flamboyant – imagine a volley of arrows becoming a storm of projectiles – Fever mode also allows you to harness the JuJu, miracles that can summon a rainstorm, cause an earthquake, and more!

All these would be nothing if not for your Patapons, who come in all shapes and sizes. Yumipons are armed with bows, Tatepons are your shields and swords, Yaripons throw spears, while the Kibapons ride into battle on tiny horses. The larger Dekapons act as damage-dealing tanks and the Megapons utilise horns to attack your enemies.

Throw in different tiers of these units with a crafting system and you have yourself a time sink trying to gather enough resources and ka-ching (Patapon’s currency) to build your personalised army. These Rarepons come with different stats and looks, combine them with loot dropped from vanquished enemies and they could be the key to your survival.

There is no doubt that Patapon Remastered can be a really challenging experience, especially now on a bigger screen than the PSP. While one would safely assume more screen real estate will help you take stock of the chaos, it is this very chaos that could easily throw your concentration off.

Maintaining that constant four-beat sequence of different songs while your Patapons are singing as they clash with the Zigotons takes some focus, especially if you want to maintain the Fever mode. Add in the need to strategize when to retreat, defend, move, or attack at the right time and it could be a rousing symphony or an utter disaster.

While there have been reports of a poorly optimised remaster when it comes to controls, I am happy to report that I experience little to no input lag, and despite age catching up to me, maintaining a precise rhythm was easier than I remembered. However, if you are looking for extra bells and whistles for Patapon Remastered, you are out of luck.

This is the same game, for better or for worse, with updated visuals for the current generation of PlayStation gamers. It has been ten years since Patapon conquer the PSP, and with this remaster, I can’t help but hope that we might see the cute eyeball creatures do it all over again for the PlayStation 4.

A joyous celebration of a fine classic, Patapon Remastered deserves your time and nostalgia.