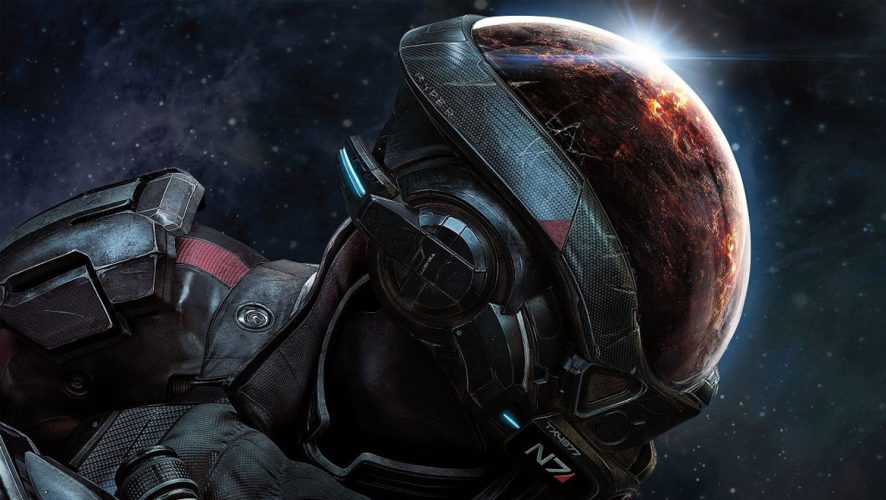 The Andromeda Initiative left the Milky Way galaxy 600-plus years ago to colonize unknown worlds in a whole new galaxy. Seven planets in the Heleus Cluster were chosen as possible “golden worlds”, and various arks full of humans, Salarians, Asari, Krogans, and Turians were sent out to seed them. However, things go horribly awry as soon as they get there. The “golden worlds” are anything but ideal, and most of the arks have gone missing. The Nexus, the Citadel-like station that arrived first and was supposed to be the rallying point for all the settlers, is not completely built and almost without power. Its people are nearly starving and the leadership suffers from ineffectiveness and political jockeying. On top of that, there is a very large and very dangerous interstellar phenomenon known as the Scourge that is making travel around the galaxy quite tricky. Things are not going well at all. When the Pathfinder, Alec Ryder, finally arrives, his mission of finding viable planets for the Milky Way races is more important than ever. 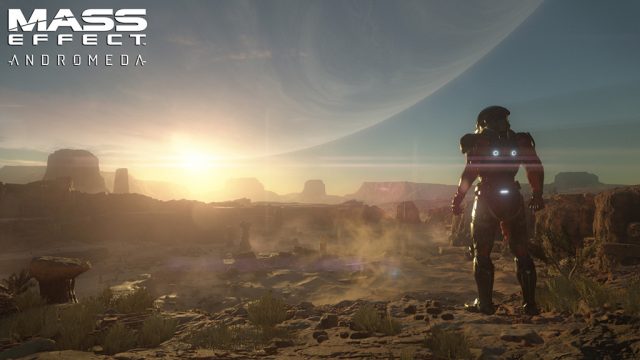 As you play the game, the Nexus will become your hub of sorts, and you will visit all the so-called “Golden Worlds”, along with various other worlds, asteroids, and cosmic phenomena in the many systems in the Heleus Cluster. You may very quickly feel overwhelmed by the sheer number of things to do in this game. It is very much an open-world shooter, nay, an open-galaxy shooter, and that is evident from the moment you finish the opening mission as lots of side quests, loyalty missions, assignments, and tasks are given to you along with your priority, story-driven missions. Three or so hours in, and you will already have about 20 unfinished things to do. My advice is just to do everything. Each mission gives you XP, rewards, upgrades, etc., and it will all be useful in the long run.

Because this is a properly open-world game, you can ignore your mission prompts and just go exploring on whatever world you happen to be on (this will require the Nomad; more on this later), and find various new things to do. This can occasionally cause narrative issues, however, like the time I ignored the mission prompt on the second story-critical planet Eos to go exploring and found some Remnant ruins before we were supposed to, triggering a conversation about amateur archaeologist and gearhead Peebee, whom we hadn’t actually met yet (though we’ve all seen her in the trailers).

Because there is so much to do and explore in the Heleus Cluster, your Codex will very quickly fill up with all sorts of interesting information on the people, places, and things you encounter, whether they be native or alien to Andromeda. And it is very, very easy to fall into the Codex rabbit hole. Even though I knew I had to spend as much time as possible actually playing the game for this review, I still spent at least an hour just reading the Codex. Mass Effect has always been about the world and story for me, and flavour text is exactly my kind of jam. If this is your jam too, look out for the tie-in novels coming out in the near future, one of which will be written by Hugo award-winning author N.K. Jemisin. 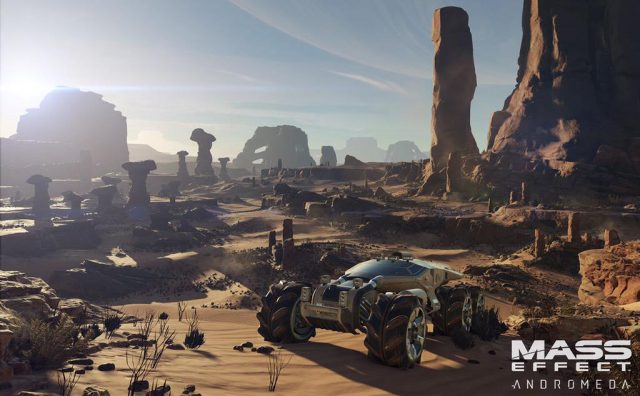 You play as one of the Ryder twins, children of the Pathfinder. Just like in the original games, you can choose to be male or female, only this time, the other twin is still around for you to interact with. You can of course customize your Ryder, as well as the Ryder twin, to look like mostly as you wish, though body type options still aren’t offered. My Ryder is a Latino lady named Guadalupe. You cannot name the twin, as your character will be called “Ryder” by everyone, and your twin will be called by the default name, either “Scott” or “Sara”. I understand the technical limitations behind only allowing your chosen character’s given name to be changed (it would be impossible to record the lines for every name imaginable and we know that digital pronunciation is still awful; I mean, Siri’s had five years to learn my name and she still mangles it), but I long for the day when I can have a properly Mexican character, with a properly Mexican name and look, save the galaxy. Ryder isn’t a neutral name, after all.

For story reasons I won’t reveal, Ryder takes over from her father and becomes the new Pathfinder, putting you in charge of the mission, the crew, and your shiny new ship, the Tempest (much in the same way Shepard was in charge of the Normandy). You decide where it goes, what your team does, and how your team progresses. In fact, this Mass Effect probably has the deepest, most far-ranging, and incredibly adaptable customization of any other game in the series. Your main character will have her starting profile with some bonuses (for example, I started as an Infiltrator, which gave bonuses to weapon accuracy, damage, and clip size, as well as a cloaking power), but you will unlock six other profiles with their own bonuses as Ryder levels up. You will be able to change to any profile at any point in the game, letting you choose the best bonuses for the task at hand. And I haven’t even mentioned the ridiculous amount of armor, weapon, and modification options available as you progress through the game. Seriously, if any two Ryders are exactly the same in any two playthroughs, I will eat my hat. 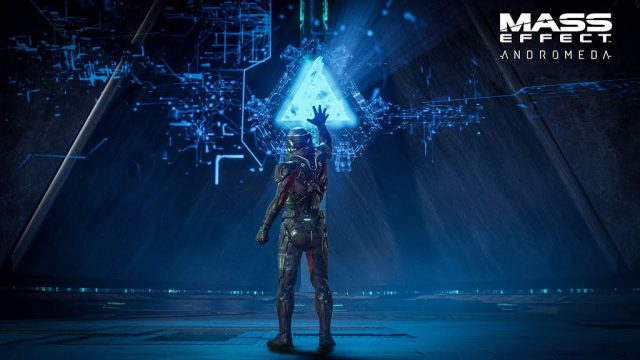 As always, romancing your crewmates can make for some of the most interesting “side quests”, and some of the romance dialogue can be quite adorable (although how and why a military leader preying on her subordinates is totally cool in the ME universe remains a mystery).

While I love me my Asari, Krogans, Turians, and Salarians very much, where are my Quarians at? They are nowhere to be found, and they are my favourite Milky Way species (except maybe for the Hanar, who are unfortunately also nowhere to be found). There is an in-game reason for this, but frankly I think the developers just decided not to do it for some reason. These guys better show up in ME:A2 because I miss Tali’Zorah fiercely.

The Andromeda races are pretty interesting, from the suspicious yet peaceful Angara, to the predatory Kett, to the mysterious artificial Remnant, they will all give you various things to ponder over as you explore, shoot, puzzle, and converse your way across Andromeda. You will learn more about the Angara more quickly, as one of them will join your crew. 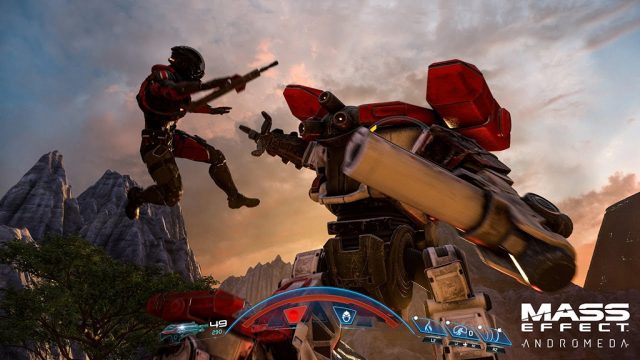 This is probably the most diverse ME game there’s ever been, and that’s saying something seeing as the other ME games were already pretty diverse. Your core crew has an equal mix of males and females of course, including your humans Cora, Liam, Gil, and Suvi, but also a Salarian pilot, two Asari, a Krogan, a female Turian fixer (who is probably my favorite), and an Angaran who will join up fairly early in the game. On top of that, I’ve already encountered black, Latino, East Asian, South Asian, gay, bisexual, and transgendered men and women on the Nexus and the various planets in the system.

Gameplay in ME:A is very, very similar to the original trilogy, with only a few modifications.

Combat is very much improved by the jumpjets, which can add immediacy and verticality not found in the first three games. You can close distances quickly to bring the fight right to the enemy’s face for some melee kills, or jump up to a higher vantage point for a little sniping. Because Ryder can be almost anything you want at any given time, your combat options are huge in every single encounter (which won’t always be against actual enemies; the local wildlife will get ornery if you stumble into their habitats).

Also improved over the original games is the conversation options. Gone is the Paragon/Renegade binary system, replaced by a more natural casual/professional and emotional/logical system. These options don’t always have an obvious “good” or “bad” response, which makes your choices more natural throughout the game. My Ryder has become quite playful with the crew, but very professional when it comes anyone outside. Anybody that gets on her bad side (like most of the Nexus leadership) gets curt and sometimes rude replies (but they totally have it coming). The political intrigue across Andromeda is actually one of my favourite bits, and I’m pretty sure I’m going to have to screw somebody over sooner or later. 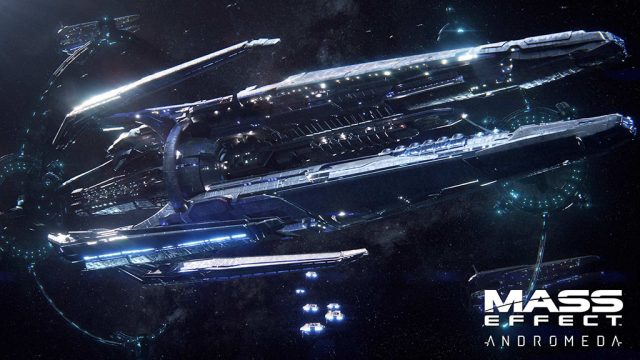 While I enjoy exploring the various worlds, I wish I didn’t have to do it in the Nomad. It handles as bad as Stormtroopers shoot. It is possible to upgrade it as the game progresses (because everything is upgradable in this game, even the Nexus), but handling isn’t one of the options.

I can’t remember if the original trilogy had this option, but I very much like that ME:A has a Narrative difficulty setting for players more interested in story rather than combat and whatnot. The obvious difficulty settings for regular and experienced players are still there, including the famous Insanity mode that I will again never finish.

A lot of media seems to have focused on various glitches that the game seems to have. While they do exist, most of the animation glitches were never an issue for me (I barely even noticed them, honestly), though there were a few occasions when dialogue overlapped, usually triggered by walking from one conversation point to another. My biggest issue was ending up in a room next door after a conversation finished and being confused for a second or two. But again, none of these were a real issue for me, and frankly, seem like nitpicking.

While not the best Mass Effect game (that throne still belongs to ME2), it certainly isn’t the worst by any stretch of the imagination. It’s still the Mass Effect you know and love, but with new additions to make it feel fresh and different enough. It’s challenging, it’s huge, and best of all, it’s fun.