The LIME restaurant at PARKROYAL at Pickering offers their famous Lobsterfest Buffet as a seasonal promotion and this year, the buffet ran from 26th May to 30 June 2018. If you’re unable to resist the temptation of a buffet with free flow lobsters, and the large variety of different flavors for the lobsters, do make early reservations for the next session.

Here are some of the highlights of the buffet:

Inspired by Singapore’s famous chili crab, the buffet had the Chilli lobster. This was literally a hot item which ran out pretty quickly. It was normal to see people queueing to wait for a new batch to be refilled. The dish itself certainly didn’t disappoint, as the chili sauce had the right amount of spice and tanginess, which went well with the succulent lobster meat. As an added touch to authenticity, there was a dish of mini-fried “mantous” (Chinese buns) for people to down with the sauce.

Forget the all famous Luke’s Lobster. The lobster ciabatta roll was touted as a new item for the buffet this year and unlike traditional lobster rolls which are served in an open bun, these were served on a toasted ciabatta roll. This was a good plus point, as there is less bread to fill your stomach in the buffet. These ciabatta rolls were topped with lobster chunks with mayonnaise and are sliced to bite-sized pieces. Although the slice was small, each bite provided a flavourful burst of flavours, where you can feel the crispness of the bun, while tasting the moist and creamy lobster mayonnaise swirling in your mouth. I found myself going for a few more helpings of these.

Unlike the other lobster flavors, this lobster wasn’t doused in gravy, and was surprisingly easy to eat. All the peppery flavour were already melded into the juicy lobster flesh. Although these ran out occasionally, there was a good supply that kept getting replenished, making this a very fuss-free dish to eat.

Lobster and Seafood on Ice

Feeling like a purist? No seafood buffet can be without fresh lobsters and seafood on ice, and here was the only section which lets you pick up lobster pincers. Some effort was required to extract the meat from the pincers, but sadly, the reward was not all that great, as flesh was not as juicy or tender as the tail portion. I concluded that it would be more worthwhile going back for the more flavourful stuff from the other parts of the buffet.

With laksa leaves and the chili paste, the lobster laksa broth was authentic and tasted like the real deal. The soup still tasted like the classic dish, thick and spicy, just that it comes with half a lobster. But as a stand-alone dish, it just was not that satisfying, so do yourself a favour and amp up the dish by adding more seafood from the cold seafood section. Those made the dish a lot more satisfying. Oh, and ask for it without the noodles. Trust me – the broth + seafood is all you need.

This was hands down my favorite dish at the buffet. The glorious rich salted egg yolk sauce generously doused on the lobster tail meat was a sight to behold, and even greater in the mouth. Unlike imitation salted egg yolk sauce made from powder, I could feel the salted egg yolk bits in the sauce. This was also the dish that ran out the quickest every time it was refilled, and the dish which had the longest queue.

If you have a thing for BBQ, head to the BBQ station, where you see fresh lobsters being grilled in front of you. There were a few sauces, such as Thai chili sauce and the hollandaise truffle sauce, which guests are free to add to the lobsters. Although many of the food reviews for this year’s buffet showed the lobster with the hollandaise truffle sauce being blasted with a fire torch, this was nowhere to be seen during a normal paid session that I attended. Shame on you Park Royal. However, this was still the best way for one to try the naturally sweet taste of the lobster.

The salad bar offers the greens you might need to chow down lobsters with. The highlight there was the lobster salad, and an area to mix your own rojak (chinese salad).

No matter how full you are, there is always room for dessert! At the buffet, the dessert section didn’t fail to impress. Besides the usual cakes, fruits and mousse, there was a matcha chocolate fondue machine to make your own matcha coated skewers. There was a section with traditional kuehs and the ice cream bar also featured heritage flavored ice cream such as gula melaka and black sesame.

The buffet was available during dinner time, from 6.30pm onwards. One should go early in order to avoid the crowd, which swarms in about 7.00pm onwards. When that happens, popular items such as the chilli lobsters and salted egg yolk lobsters run out pretty fast, and you might need to queue for a while to wait for the restaurant to fry out a new batch.

This buffet costs about S$130 after all the taxes and service charge. It would be definitely worth eating this if you can eat more then 10 pieces of lobster tails, which will be equivalent to about 5 whole lobsters. If not for my tight schedule, I would have definitely revisited this to experience this again. 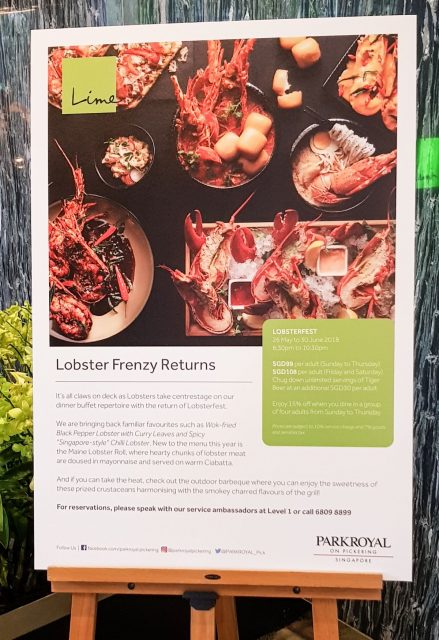 *This meal was paid for by Geek Culture’s reviewer.