Traveller’s Tales is back with another super fun installment in their LEGO franchise, but this time, players get 100% more dinosaurs! Play your favorite LEGO-fied characters, like Ellie Sattler, Owen Grady, Sarah Harding, and my personal favorite Ian Malcolm, as they run around Isla Nublar and Isla Sorna running away from various “meatasauruses”!

65 Million Years in the Making

The game lets you play through twenty levels that more or less follow the plot of the four Jurassic Park movies, with the notable exceptions being character deaths, because this is a family-friendly game, after all. There’s actually a pretty great gag in which characters who die in the original Jurassic Park film get a quick cameo in a Jurassic World level, which takes place on the same island twenty or so years later. They didn’t die, they’ve just been hanging out.

The LEGO games are actually well known for their excellent visual gags and physical comedy. This is a legacy from the early LEGO games which didn’t have the benefit of voice acting, and which has thankfully been kept in the newer iterations.

Quick aside: does it not bother anybody else that very few of the dinosaurs featured in the Jurassic Park movies, and consequently in this game, were actually not from the Jurassic period? Most of them were from the Cretaceous period, including Tyrannosaurs, Velociraptors, and Triceratops, so Cretaceous Park would have been a much more accurate name. I weep for our children. 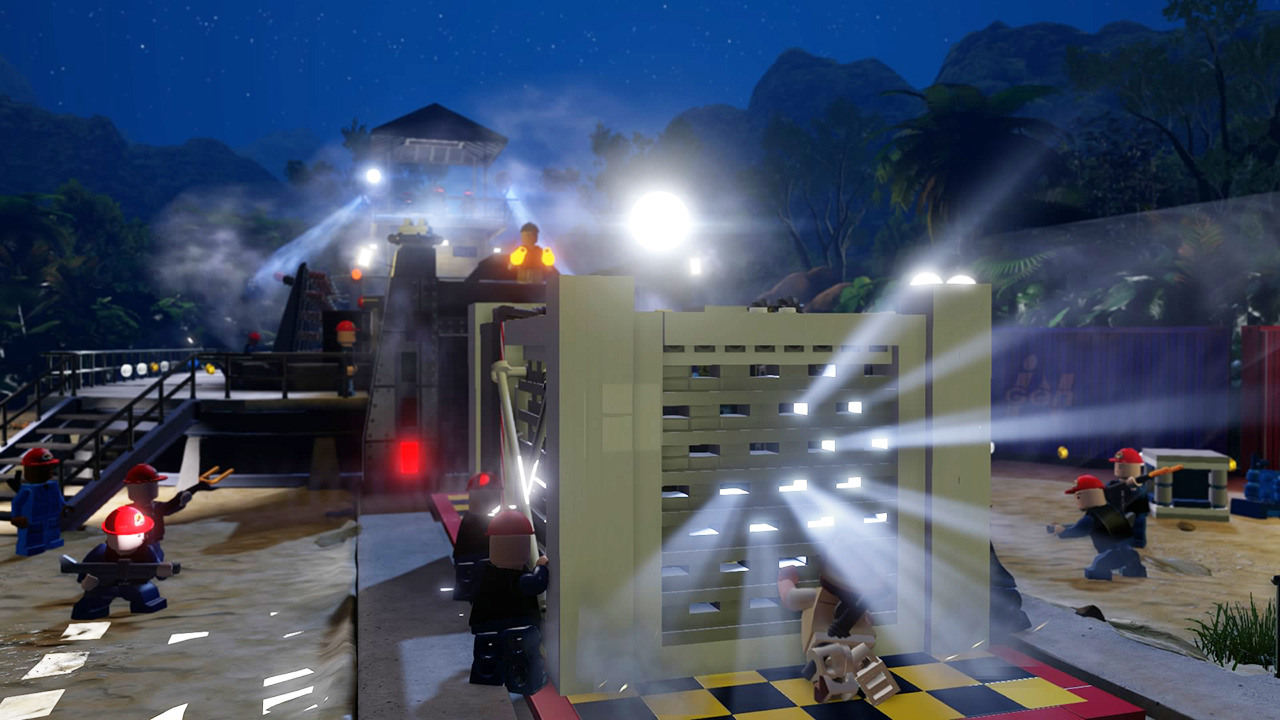 That is One Big Pile of Poop

LEGO Jurassic World contains much of the same gameplay that exists in other LEGO games, so the learning curve is not very steep at all. For example, players will have to help sick dinosaurs by locating three objects in the vicinity. This is almost exactly the same as the potion creation elements of the LEGO Harry Potter games. This isn’t to say there aren’t a few innovations, however. For example, jumping challenges have been a made easier for the platformer-challenged among us (like my wife), but other dexterity puzzles have been made slightly more difficult to compensate (instead of rapidly pressing the circle button, you now have to rotate the left stick to turn a crank). But the best gameplay innovations involve the dinosaurs themselves, and rather a lot of their excrement.

For those of you who have never watched Jurassic Park III (I was one of you until very recently; it’s actually pretty decent), there is a character in it that figures out most dinosaurs are afraid of Tyrannosaur urine, so he bottles some of it and uses it to keep some of the other dinos away from his makeshift bunker. In the game, this same character can lob bottles of T-Rex pee at certain other dinosaurs to get them to run away, which, quite frankly, is genius. 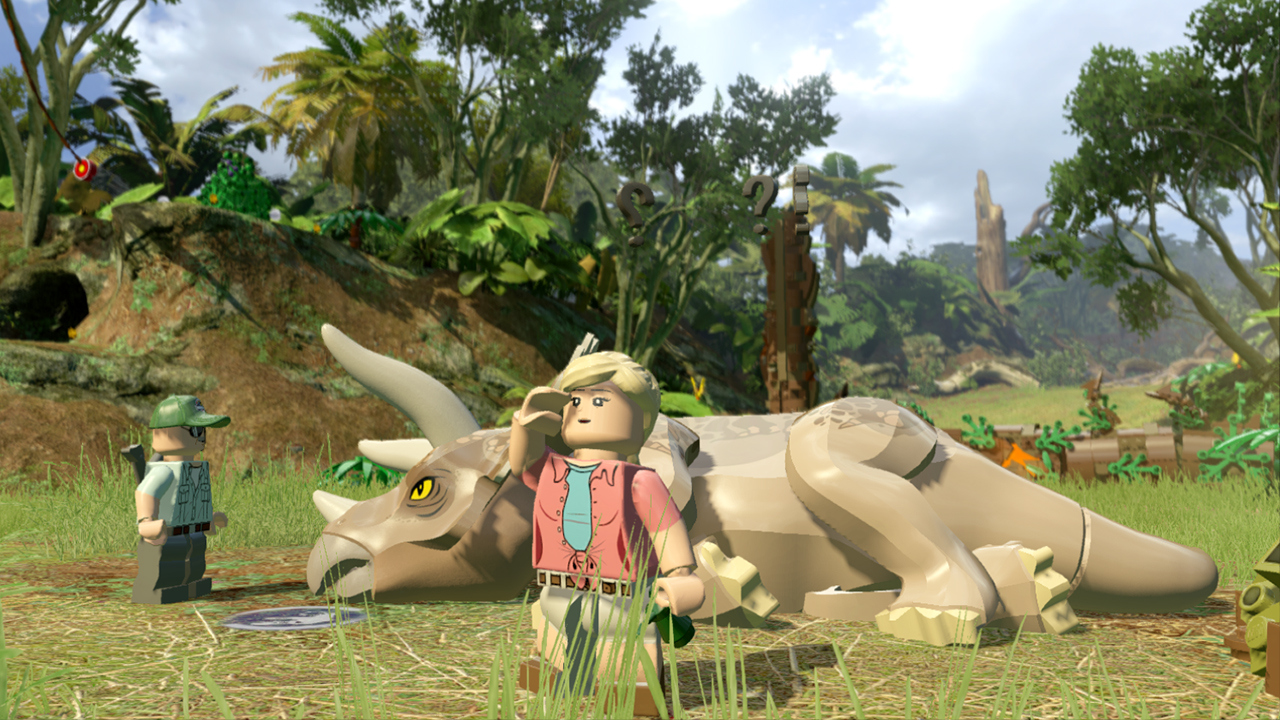 My other favourite gameplay addition is the giant mountains of dino poop that various characters can rummage around in to search for whatever LEGO piece you need. This exists thanks to Laura Dern’s excellent portrayal of the completely-unafraid-of-dino-feces Dr Ellie Sattler in the first film. The dino poop mechanic is similar to the fear mechanic in other LEGO games, where certain characters won’t go near the offending material while others can. For example, Superman and Kryptonite in the LEGO Batman games, and Indiana Jones and snakes in the LEGO Indiana Jones games. But it’s way more fun to watch LEGO-fied versions of Laura Dern, Julianne Moore, and Chris Pratt literally dive into giant mounds of dino poop.

But, bar none, the best new mechanic in LEGO Jurassic World is getting to play as the dinosaurs! From the chicken-sized Compsognathus (who can get into the super small tubes that no one else can), to the building-sized Brachiosaurus (who can stomp and break large, rocky plates on the ground), every dinosaur has a special ability that players will need to complete 100% of the game. The dinos are unlocked mostly by finding the Amber bricks hiding in all twenty levels of the game. If you find all the Minikit pieces in a level, you can play as the completed skeleton of those dinosaurs, which is both cool and a little creepy. You can even dabble in some genetic tampering of your own and create custom dinosaurs! 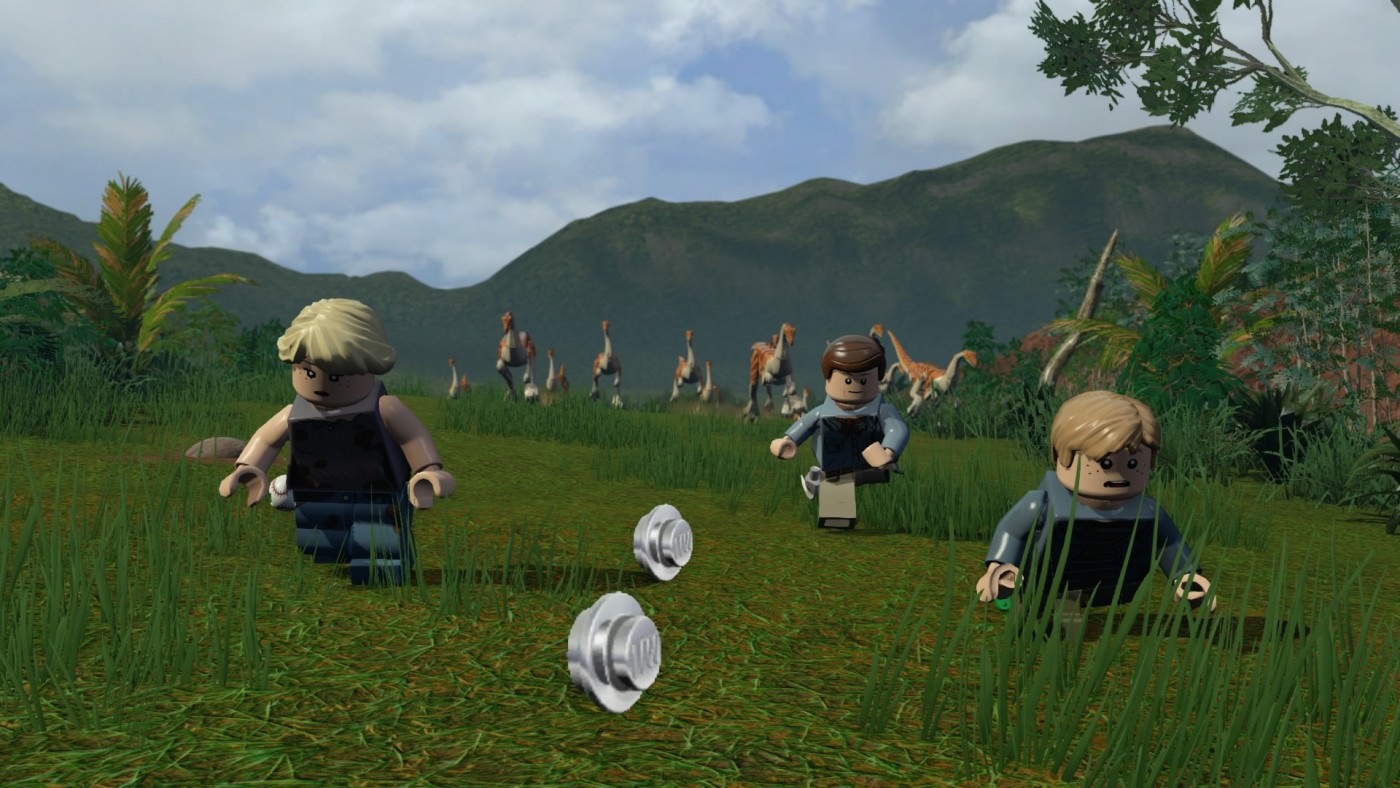 Traveller’s Tales has a track record for slick visuals, especially when it comes to LEGO-fying pretty much anything and everything. However, they also have a track record of obnoxious bugs in their games that require players to start the whole thing over again if they want to get 100% completion. I finished all the levels and did a fair amount of red and gold brick hunting, and while I have encountered plenty of smaller bugs here and there, I have not found a game-breaking one yet, and I hope it stays that way.

John Williams’ excellent score from the films is used throughout the game, as is a lot of film dialogue for most of the main characters, in the same way it was used in the LEGO Lord of the Rings and LEGO Hobbit games (though I’m almost certain Chris Pratt recorded some extra lines that weren’t in the film). However, some of the audio files were of very poor quality. The sound suddenly dropped, or there was background sound effects that lasted as long as the spoken line. It was quite jarring, and wasn’t something I had experienced in previous LEGO games.

A saving grace of the game’s presentation is the dinosaur facts during the loading screens (though some of them are actually movie plot facts instead of dinosaur facts), and, as we found out in my previous review, I am a huge fan of random, non-gameplay-specific trivia while I wait for my game to load. 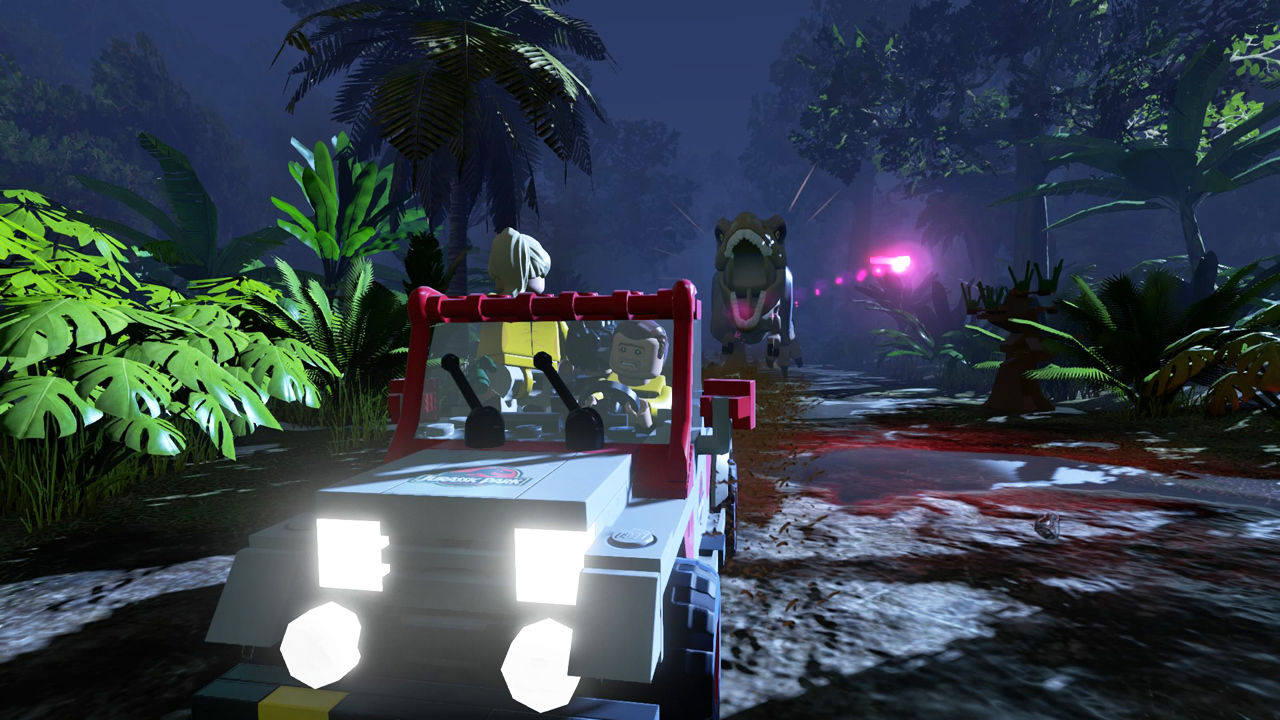 A fun and engaging entry in the LEGO video game series where you get to be lots of different dinosaurs. Perhaps next time, however, Traveller’s Tales can get better quality audio clips.