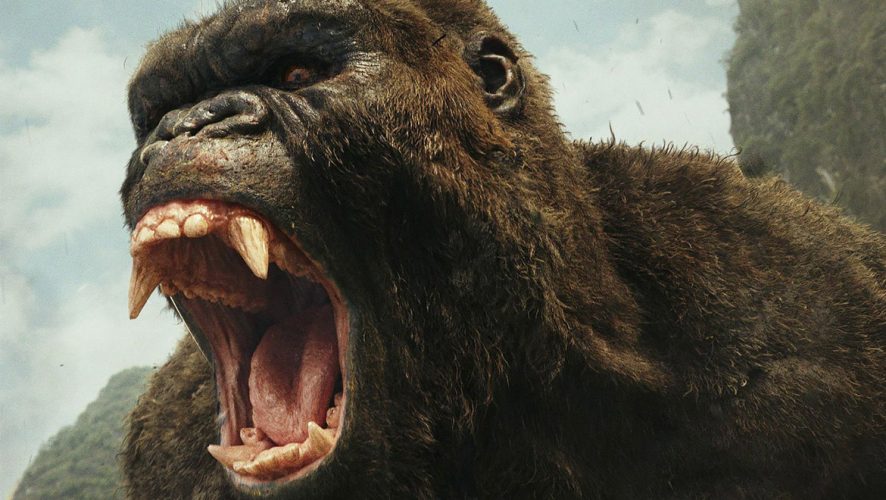 Kong: Skull Island is Legendary Pictures’ latest endeavour in its MonsterVerse franchise, which is building up to a Godzilla vs. Kong showdown slated for 2020. I know, the Japanese have already done their version back in 1962, but hey Hollywood, it’s better late than never.

Against the backdrop of the end of the Vietnam War and the beginning of the Cold War, a team of academics, explorers and soldiers, led by Bill Randa (John Goodman), pursue the myth of an as-yet-undiscovered island somewhere in the Pacific. Of course they get more than they bargained for when the king of the island himself shows up. Racing against time, they must decide whether he is friend or foe. No, this isn’t your Daddy’s King Kong, with the blond girl and the third act atop the Empire State Building.

Kong’s biggest accomplishment is no doubt in its stunning visual effects. Everyone’s favourite colossal ape has been elevated to 30 metres, which adds a whole new dimension to the expansive fight scenes. Director Jordan Vogt-Roberts capitalises on Kong’s upsized stature to deliver shots of breathtaking height and depth—shots evidently tailor-made for an IMAX 3D viewing.

It is also no secret that many Singaporeans from the local arm of Industrial Light & Magic’s (ILM) worked on the movie’s CGI, ranging from Kong’s individual strands of fur, to smashing action sequences against Vietnam’s rugged landscape. Still, one can’t help wonder if they led the charge, or merely followed what was already laid out for them, in terms of effects work. But boy, does the attention to detail and excitement pay off!

But what this newest remake does not capitalise on, is the chance to fully revise what can be considered problematic of the classic storyline. Though the film attempts to be disapproving about mankind’s imperialist sentiments and blatant disregard for nature, it is too afraid to fully engage with these subjects. Instead, Vogt-Roberts prioritises shock value and beauteous backgrounds, none of which can conceal the story’s lack of depth.

Speaking of backgrounds, the science of Kong: Skull Island is also immensely baffling. Why would an island west of Sumatra – that is, in the middle of Southeast Asia – have foliage and weather phenomena that can be found only in the more northern and temperate climates? No amount of geological techno-fable can explain these puzzling directorial choices. And we haven’t even moved on to the creatures of the movie…

Though the movie is titled after the monstrous primate, the film is largely (human) character-driven. This can be a good thing – if only the writing allowed for more interesting characters. Despite boasting a star-studded cast of Tom Hiddleston, Brie Larson and Samuel L. Jackson, their roles are not the most memorable, limited in part by poor characterisation. I left the theatre remembering little of tracker James Conrad (Hiddleston), other than his soothing baritone voice and name, which seems to be a tongue-in-cheek reference to the author Joseph Conrad, of Heart Of Darkness fame. That book was also the original inspiration for King Kong, hence the tribute I guess..

Rather, it is supporting characters such as Cole (Shea Whigham) and Mills (Jason Mitchell) who will steal your hearts. Along with a subtle but strong performance of Major Jack Chapman (Toby Kebbell), these secondary characters are a breath of fresh air in a heavily caricatured movie.

All in all, Kong: Skull Island is a passable reboot of the King Kong franchise if you are willing to look past the narrative loopholes. Vogt-Roberts deserves credit for the way he envisions and brings the towering ape to life. Hopefully Kong will live to be a titan in his own right in the subsequent MonsterVerse instalments.

Oh, and if you’re a fan of monsters and kaijus, stay for the post credit scene at the end of the movie. Remember, Kong vs. Godzilla, 2020, and you heard it here first.

Kong: Skull Island may not punch above its massive weight, but it delivers maximum thrill in the colossal ape’s first appearance, in what will be a buildup to a titanic showdown.