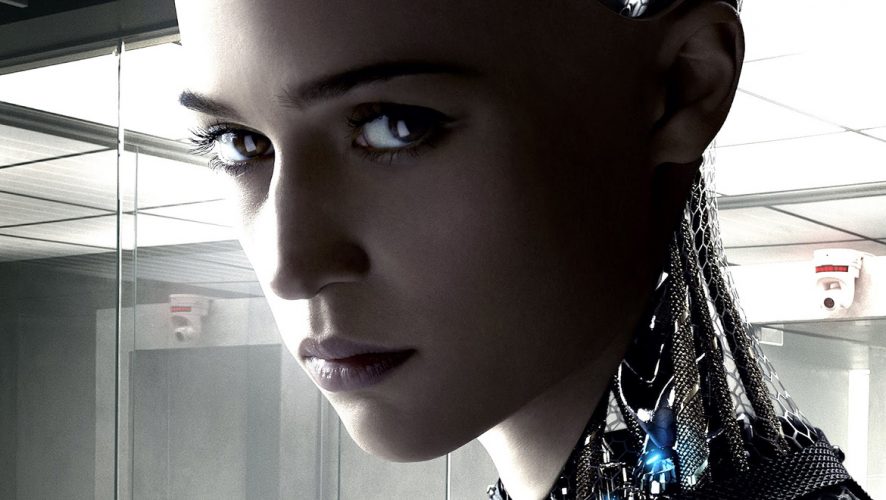 What does it mean to be sentient? To have thought? To know that one is an individual, with wants, needs, desires and a will to preserve one’s existence? What does it mean to be able to convey such impressions? Is empathy or the ability to inspire empathy a part of what it means to move away from being inanimate to being aware? Or is it a lie that tells the truth, that those who are human seek to find the humanity in others, always?

In a nutshell, Ex Machina is a presentation on the Turing test scenario skewed and altered and then allowed to run on a trajectory that leads to spectacular chaos, all within the confines of a drama played out with slow burn effect between 3 main players. 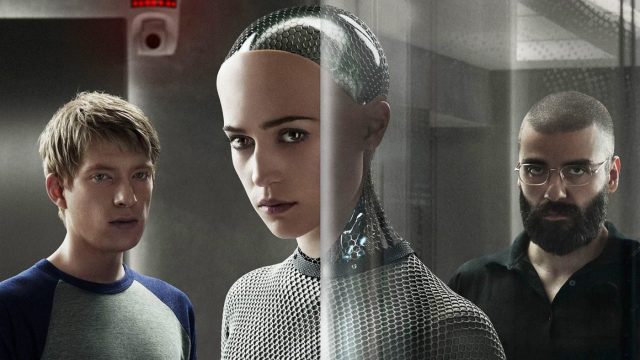 Ex Machina is a low budget yet impressive directorial debut from well regarded screen scribe and frequent Danny Boyle collaborator Alex Garland. Structured and paced like a play, Ex Machina starts right off the bat by submerging the viewer in a sense of isolation.

In a remote Scandinavian retreat, Caleb (Domhnall Gleeson), a withdrawn hipster programmer has been invited by his ultimate employer (and Zuckerberg-ish approximate) Nathan to participate in a very unique kind of sneak peek into Nathan’s pet project, Ava.

Ava is a stunningly beautiful construct with all the nuance and intricacies of verbal and non-verbal communication. After signing a stack of NDAs, Caleb is then tasked to put Ava through a series of skewed Turing type tests, each with variables not part of the original mandates of the original Turing test.

For those not in the know, the Turing test according to Google is quoted as such “a test for intelligence in a computer, requiring that a human being should be unable to distinguish the machine from another human being by using the replies put to both”.

As the tests become less classroom and more real world, Caleb begins to struggle with the challenges of his tasks as invigilator, while Ava becomes more intimate and Nathan begins to show signs of unravelling at the seams. 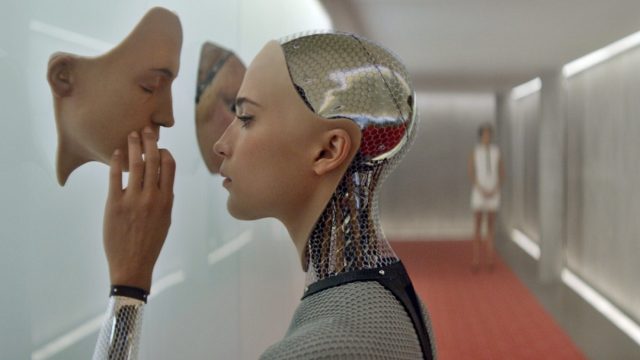 Without going into the specifics of the movie, Ex Machina is a compellingly original piece which although does not fully push the boundaries of the questions it asks, but does reward the viewer who can sit down and give the film a due span of attention, as it relies on great performances and great nuance to push with equal measure, the elements of suspense and dread with deliberate pace.

Ex Machina is certainly not cyberpunk action, belonging more to the realms of Isaac Asimov and Ray Bradbury in terms of pace, philosophy and turn of suspense.

At its best period, Ex Machina puts forward so many relevant questions to the viewer about notions of identity, and self-awareness and the constructs of individuality. It would have been nice of the movie to stay there longer to answer questions of the sort also raised in other like minded films like Her, and The Bicentennial Man

There are moments of Zen garden beauty in the cinematography of Ex Machina. The Scandinavian and neo-Japanese aesthetic playing a visual accompaniment to the cold and foreboding nature of the subject matter. Which only starts to rattle with discord when paired with the nature of looming chaos in the second half of the film. 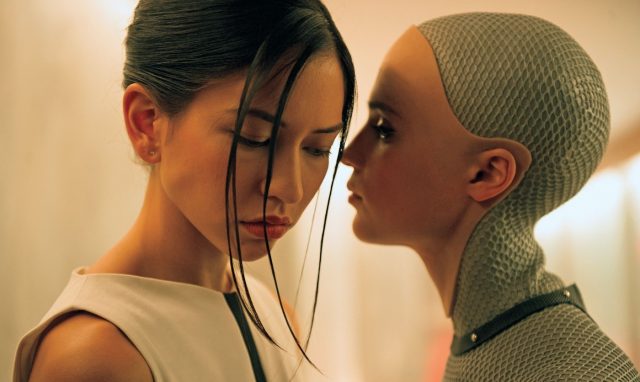 It would be doing a great disservice to Ex Machina to speak next to anything about what happens specifically in the film. For that, Geek Culture will spare any spoilers or plot points apart from the setting of the test scenario already stated.

It has to be said though, those expecting futuristic cyberpunk action in the vein of Blade Runner and Minority Report need not apply. You’ll find it slow and requiring quiet viewing. Those who appreciate movies like 2001 A Space Odyssey and Moon would find Ex Machina a more suited viewing.

All in all an ambitious yet controlled debut from Alex Garland. While this subject would have been knocked out of the park by a more experienced cold subject matter director like David Fincher, it is nonetheless textured entertainment that isn’t vapid nor mindless. A lot of it is worth recommending even if this movie did fly under the radar on the commercial circuit.

I think therefore I, Robot. 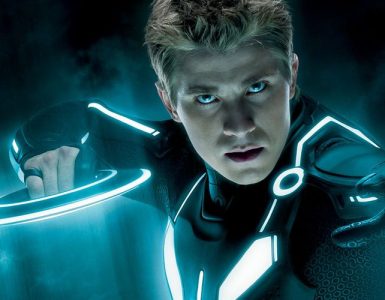 The Big Bad Wolf huffed and puffed and blew the house down.