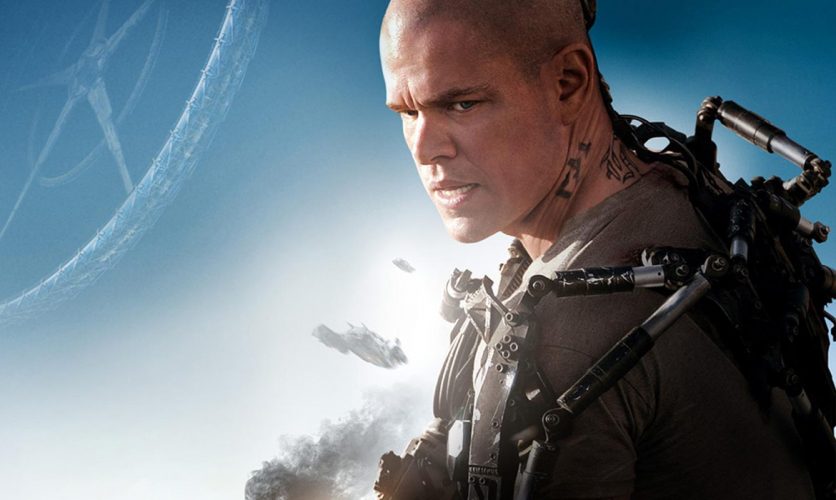 When Microsoft pulled their commission for a Halo movie from Peter Jackson’s then unknown South African drafted talent of Neill Blomkamp, little would they know the depths of their folly.

Feeling sympathy from having his meticulous prep halted midway for the project, Neill was gifted with a 10 million dollar “do what you will” fund that ended up being the sleeper hit with the biting social commentary and hard hitting Sci Fi action of District 9.

Since then instead of heading right into a sequel to that intellectual property, Neill has quietly been putting together another one of his science fiction embedded ideas in his presentation for Sony pictures called Elysium.

Elysium positions the near future in the context of HG Well’s The Time Machine and it’s two future races of the Eloi and the Morlocks.

In this case the proverbial Eloi reside in Elysium. An orbiting paradise where it’s inhabitants live luxurious and rich lives, where disease and all manner of ailments are removed by a lay down in readily abundant medical bays, a one stop treatment for all symptoms chronic or otherwise.

In juxtaposition on Earth reside the impoverished and destitute, working in harsh and crushing oppression by the powers who govern from their lofty positions above the earth. The face and steel fist of this tyranny is played with pantomime villainy and the cheesiest pseudo – Franco caricature of Jodie Foster, who should just quit acting right now and just walk away as she promised to in this year’s golden globes past speech.

The problem about Elysium seems to be from the script level. There is not enough to flesh out the characters and narrative with enough dimensions to enable it to bounce off the screen as more than just a very thinly veiled statement on the state of healthcare and it’s discrepancy between the social and ethnic classes.

Elysium is really a much smaller thematic picture than District 9. In that sense it does come across as disappointing given how much a breath of fresh air the latter film was.

What’s good about the presentation is the visual skill of Blomkamp’s rendering of all things near futuristic in terms of mechanical and weapon based innovations.

The combat sequences are interesting but the full capabilities of what exo-suits could do on a combat perspective does seem to have been an opportunity missed.

In terms of cast, Matt Damon is criminally underused given the vast range he is capable of. With the exception of Sharlto Copley whose extremely unsettling villain of Krueger steals every scene that he is in, every other character in Elysium seems locked in the tropes of character stereotypes wrought from a dozen films of this nature before concerning class divide and the representation of social disparity.

While I wouldn’t go as far as saying Elysium should be passed on, you should go into it managing your expectations especially through the lens of comparison against District 9. It’s concept won’t hold up to contemplative scrutiny and by the end you will leave the film thinking it could have been fleshed out in a manner of different ways, it is still quite entertaining for its visual presentation and action set ups.

It just doesn’t have prawns. Or mechs. Or a blistering indictment on the social politics of present day Johannesburg. Or a completely immersive mockumentary
in with near future cyberpunk stylistics.

Elysium is really a much smaller thematic picture than District 9. In that sense, it does come across as disappointing given how much a breath of fresh air the latter film was.