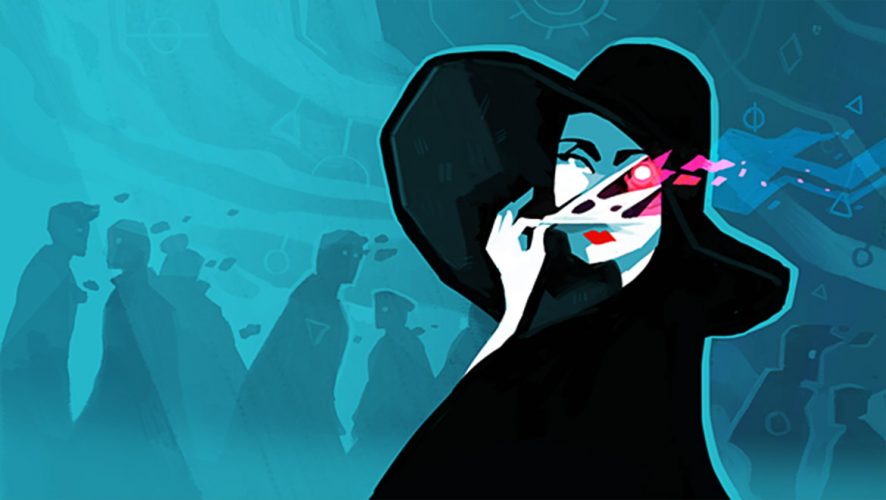 Your dead-end job makes you want to blow your brains out. Day in, day out, what’s the point of it all? But something calls to you – whispers in forgotten texts, murmurs in the street about the silence that comes and the cold that ends. Maybe these sayings have something to it. Maybe you can find meaning through a new faith, one of your own creation.

Made by Alexis Kennedy (Fallen London, Sunless Sea), Cultist Simulator is roguelike narrative card game, but not like any typical card game that might come to mind. The entire game is played out on a plain, dimly-lit table, plugging various types of cards into timed action boxes to achieve varying results. But all the while, the story unfolds in the Lovecraftian 1920s setting, bringing to mind the unknown horrors of Call of Cthulhu. 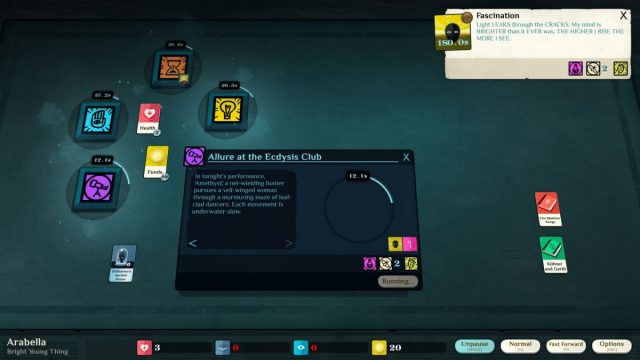 The base mechanics are simply enough. There are boxes attributed to verbs, the main ones being Work, Study, Explore, Dream, and Talk. Dragging and dropping the right cards into these boxes starts a timer, where it takes a certain amount of time for the action to complete, and these cards are either consumed or you receive different cards in return.

For instance, dropping a book into Study box might take a minute, and when the timer finishes you’ll be left with cards of what you’ve learned from reading to collect – perhaps you’ve gained Reason, or maybe discovered a new Lore card.

You begin your first game as an Aspirant, placing your Menial Employment Card into the Work box, which returns you with Funds cards. Not long after a new box will appear and stay for the entire game – Time Passes, which consumes 1 Fund every minute for your survival. Just like how you need money for necessities in real life, staying afloat with sufficient Funds is a must to keep going. 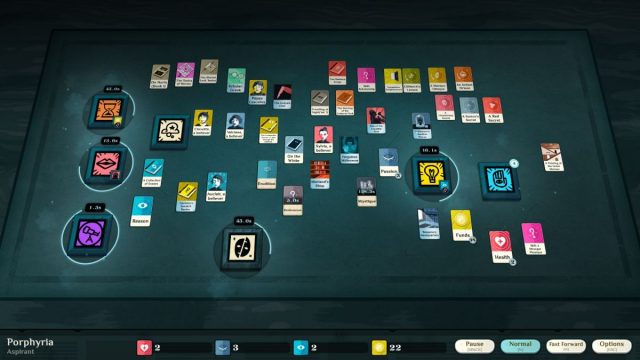 Your other main resource cards are Health, Reason, and Passion. From then on, the game is a huge process of trial-and-error to puzzle out. And when I say huge, I mean huge. There is no tutorial whatsoever, the game doesn’t hold you by the hand – it throws you into a pit of sharks and says “Good luck!”

But there’s the beauty in it. It may sound like a drag, and was rather befuddling at the start, but it wasn’t long before I was sucked into a world of fascinating experimentation, getting those “aha!” moments when I figured out what effects certain cards can achieve.

There’s a whole host of things you can do and it’s up to you to choose your path. Study books to discover ancient lore, explore hidden locations to uncover artefacts, perform rites to summon creatures. Found your cult and spread your beliefs while staying hidden from the prying eyes at the Suppression Bureau, but if you’re being investigated, send your minions to, ahem, deal with the hunter. 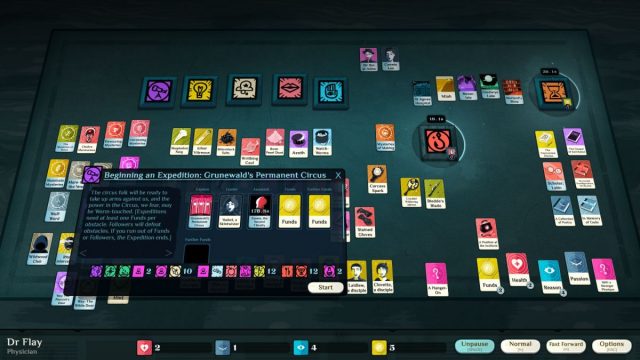 It’s a tricky balance, micromanaging your activities while keeping from dying. Earlier on in the game you could die from succumbing to sickness, starvation, or despair if you don’t have enough Health, Funds, or Contentment cards.

How it could play out is a new timed box would appear, such as No Health is Left, and if you don’t find an appropriate Health card to drop into the box before the timer runs out, it’s game over. Later on, your game could also end by getting arrested by the Suppression bureau, if they successfully amass enough evidence about your cult activities.

Remember how I first described the game as roguelike? That’s because you will die, and the game intends you to die, but death isn’t the end. You restart fresh with an empty board, but with ‘legacies’ – different jobs and roles that nod to the story of your previous character. 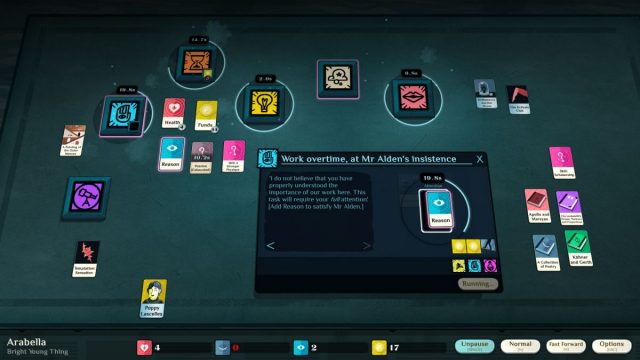 For example, your second run might begin as a Physician, faced with the insane and chilling scribbles of a recently deceased patient with the name you chose in your last run. These new roles come with different job and resource cards, along with slightly different storylines.

Every run is different, and each fresh start doesn’t feel like you’re dragging your feet to reach the same point since you can always pursue different options, along with the random events and items you may discover. 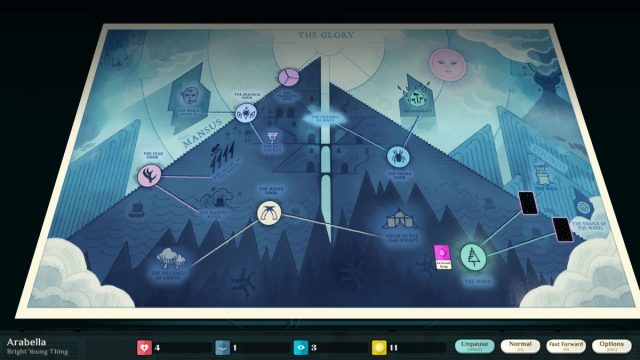 As for the interface, everything is clean and simple, cards and task timers laid out on the table, with buttons to pause, play, and fast forward the events at the bottom. The main criticism for the game would be the card positioning. There isn’t any fixed layout for the tabletop – cards and boxes can be moved and placed freely, which does give you the freedom to organise it however you please.

But it’s not long before the table descends into an absolute mess of cards, as they don’t snap into a grid. You want neat, straight rows? That means pausing the game to manually pick up and place cards in straight lines yourself. If you’re OCD, then arranging cards will be a time-consuming pain. 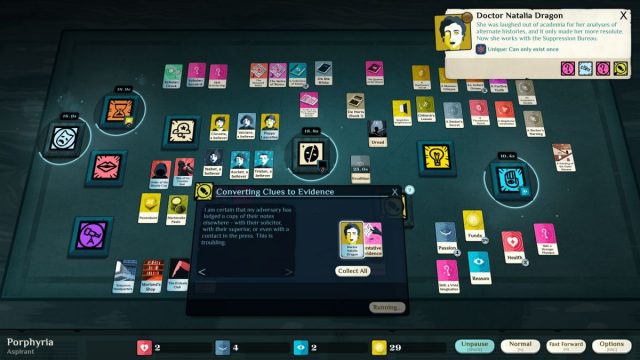 This is fine at the beginning but later in the game, where you can easily have over 50 cards on the table, it becomes a nightmare and a chore to organise, especially since most of the cards do not stack. A simple snap-to grid for cards, or more keyboard shortcuts would greatly improve the gameplay experience.

But it must be said, this game isn’t for everyone. Sometimes, it feels like I’m banging my head against a wall, stumped on what to do next or how to solve a problem, all while the timers to my doom are ticking down.

There’s an unforgivingly steep learning curve, but putting the time and patience into multiple restarts is worth it in the end, as there’s always something new to find or bits of delightful flavour text and lore to read. 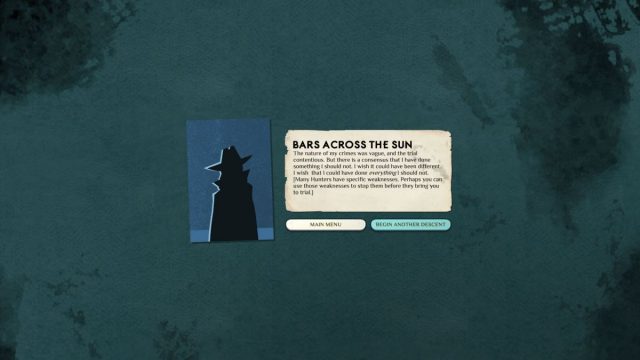 And yes, there is an end to the madness, with multiple ways to beat the game, although the victory isn’t nearly as satisfying as moments along the way figuring things out, and looking back to realise how much you’ve learnt about how to progress without going through a single tutorial.

Cultist Simulator is available on Steam for Windows and Mac for S$18.50.

A card game on the surface, but an intricate strategy puzzle game at its core. Cultist Simulator is filled with Lovecraftian horrors that take time, patience, and experimentation to unravel, but sucks you in with incredible narratives and the desire to uncover the unknown.