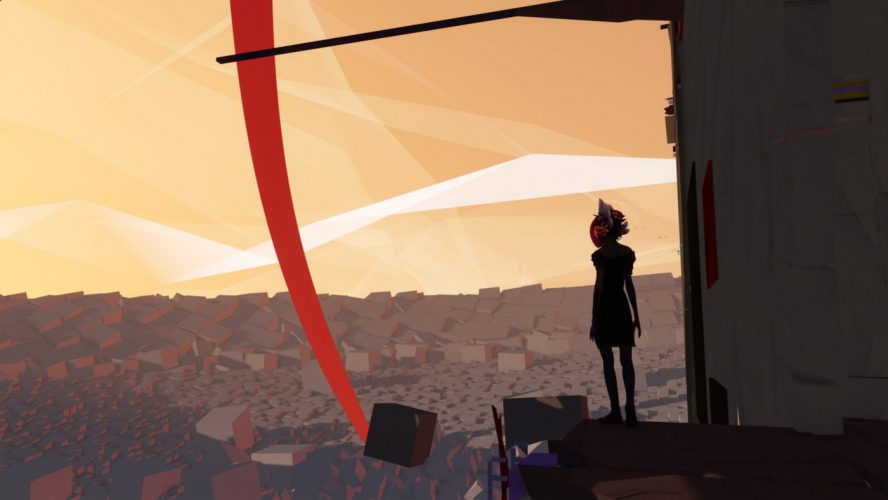 On the surface, the premise of a princess facing off against a disturbing influence in her kingdom seems familiar, but the game’s use of movement, often in the form of fluid, seamless dance moves across the terrain is a very different one.

And her kingdom is actually a surrealistic dreamlike world, filled with abstract images and structures that defy physics. Her dances allow her to escape danger as she gracefully slips past traps and fire.

Yet the lack of definition in her realm is also a detriment to the game’s presentation. The world feels inspired by the works of MC Escher but the final result is more like a collection of structures connected by impossible objects, like the Penrose stairs.

Connecting each chapter is a short clip of a pregnant woman looking through her scrap book, spliced with memories of a haunted childhood that point towards some sort of abuse.

It’s as if someone wanted to depict the results of years of abuse, and came up with a game that uses a dreamlike world to represent a princess fighting repressed memories (the disturbing influence) in a non structured world. At times, the world and game seems brilliant in its execution while sometimes, the entire presentation feels rather forceful and to blatant in its interpretation.

The princess figure isn’t so much the hero, but more of the game’s narrator as she explores this world, with the players as her audience. There is no combat to speak of and the game pretty much unfolds as a giant puzzle that has players figure where the next path leads to.

But after several hours of jumping, sliding, falling, spinning, dancing, rolling and swinging in this fractured realm, and no closer to understanding the link between the pregnant woman at the beach, who is reading a scrap book filled with dark drawings that have manifested themselves into this shattered kingdom, along with images of some sort of abuse of young children, Bound feels incomplete in some way.

It’s not in a bad way though but the infinite sadness that you get from playing this game makes you wish that the dances here were more an interpretation of joy than some unexplained dark tendencies.