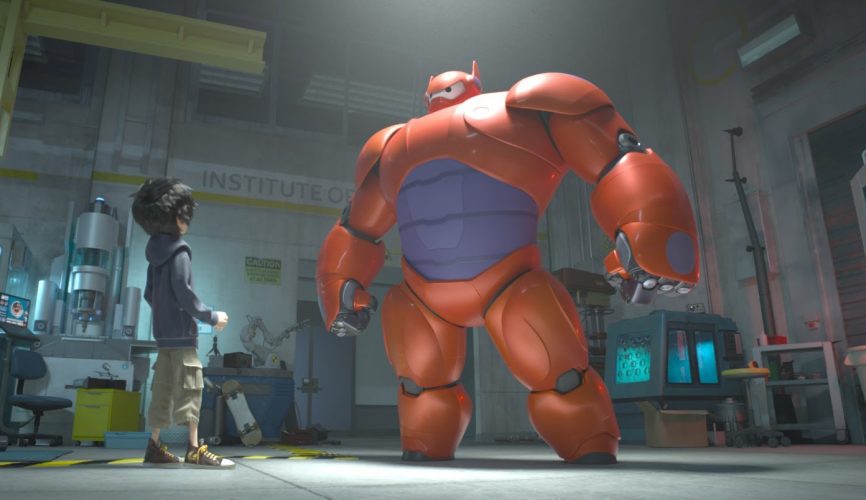 Quick, name me an obscure superhero comic book published by Marvel Comics that Disney turned into a movie.

Guardians of the Galaxy? Nice try, but obscure is the keyword here. Wait, you mean there’s a superhero team less well known than Star-Lord and his team of alien crusaders?

Big Hero 6 is a Marvel Comics super team that I have never even heard of, and I’ve been reading comics since 1987. To cut a long story short, Disney acquired Marvel Comics and the new owners decided to look through Marvel’s huge library of characters, to see if anything can be mined as an animated feature.

For some reason, the folks decided on Big Hero 6, a team of heroes defending Japan. And that is all you need to know about the comics because Disney, in its infinite wisdom, decided to ignore much of the backstory from the comics and put their own spin to the property. In other words, this movie stands alone and apart from the other Marvel Comics movies by Disney.

And the movie is so much better for it. Without links to Disney’s other Marvel Comics adaptation, Big Hero 6 stands on its own. In fact, you won’t even care that Big Hero 6 from the comics even included two mutants from the X-Men. These same mutants  have been licensed to Fox for their live-action X-Men flicks and cannot be used here.

The tale starts with Hiro Hamada, a genius-level boy who spends his time participating in bot fights in San Fransokyo (Yes, it’s a portmanteau of San Francisco and Tokyo, which explains much of the East meets West cultural amalgamation jam packed in this movie).  It isn’t until his elder brother, Tadashi Hamada, another genius, brings Hiro to the local university that Hiro learns that there is much more to robotics that he has yet to master.

There, Hiro meets the university think tank, helmed by Professor Robert Callaghan. The team includes GoGo Tomago, Wasabi, Honey Lemon and Fred, and Hiro now cannot wait to be part of the group. Each of these folks has an expertise in a scientific field and as you can surmise, that skill becomes the basis of their super power when they choose to suit up later in the film.

And the reason for forming a team has something to do with Hiro, whose newest invention, thought-controlled nano-robots, gain the attention of hot-shot industrialist, Alistair Krei.

The surprise here is how Disney has taken a crew of unknown characters, slapped together a storyline, threw in some super heroics and managed to make the audience care.

No, I’m not referring to Guardians of the Galaxy. Hiro starts off as an endearing child and his relationship with Baymax, his brother’s robotic creation, is what draws viewers in. Eventually, the story of Big Hero 6 starts and ends simply as the tale between a boy and his pet robot.

Disney also gets props for the effortless yet effective manner it introduces the other members of the super team. Wasabi invented an electric blade that cuts through anything so of course the African American gets to be the sword wielding hero in a Japan-infused society. As far as I can tell, Honey Lemon creates particles that react differently with matter, while GoGo Tomago created friction free wheels that allows her to zip around really quickly.

That’s all you really know about a hero’s origins really. The writers do a nice job of weaving the other members of Big Hero 6 into the narrative when necessary, and putting them in the background when needed.

And if you’re puzzled by the food related names, you have Fred to thank. As the token joker in the team, he brings about a fresh level of humour and while he does not steal the show, he has his moments. While this is not a Disney/Marvel movie in the strictest sense, do stay for a post-credits scene. It basically puts some background into what I initially thought was an inside joke referenced in the movie.

Animation wise, the style is similar in tone with Disney’s/Pixar’s The Incredibles. The city of San Fransokyo is more fleshed out here though, and the little things, such as a redesigned Golden Gate Bridge, if it’s even called that, makes this a movie that deserves a second viewing, just for catching all the little details.

And there are also the easter eggs that the writers, animators and basically anyone involved in this film has thrown in. There are supposed to be many of them but I got so engrossed in the film, I missed out on almost every one of them. And I suspect that the few I did spot were meant to be overt and in my face.

My one gripe with the film is with the twist that reveals who the main villain is. I called it the moment he appeared and it was really too obvious. Other than this little stumble, Big Hero 6 hits all the right notes and will surely appeal to the younger audience that it is targeting, as well as with the older crowd who grew up on a staple diet of superhero comics.

And if for some reason you hate the movie, there is no way you can dislike the Pixar-styled short, Feast, which opens the film.

Less of an origin story and more about relationship building among superheroes, Disney has hit this one out of the park. It is up there with The Incredibles as one of the better-made animated movies released in the market. There is not need to have knowledge of the comics as Big Hero 6 is ready to carve out its own history among movie goers.