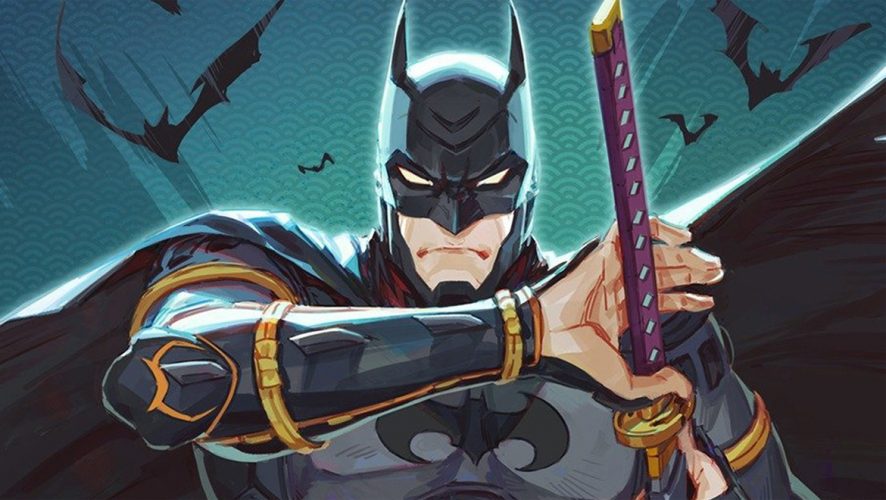 Do you know the phrase “Batshit Crazy”? Well, Warner Brothers has made a movie that defines the phrase, and it stars the ever popular Batman.

It’s a movie about Batman, for sure, but is it really for Batman fans? Batman Ninja is a spectacle of anime-level action sequences, fantastic visuals and….not much else. Directed by Junpei Mizusaki and animated in collaboration with several Japanese animation studios, this movie, about Batman being thrown back in time into feudal Japan, is just as wild as it sounds. 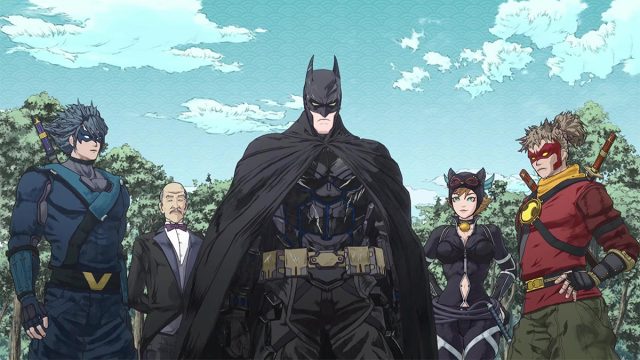 (Be warned: this review is based on the English dub of the movie. We have been told that the original Japanese version does not suffer from some of the problems that we had with the dub. Meaning? The lip syncing is terrible and ruined the immersion, but we’ve tried to remove that bias in our review. Still, if you can get your hands on the Japanese version, we would suggest that you opt for that.)

Let’s start off with the positive: Batman Ninja is, without a doubt, visually fantastic. The art style is a perfect blend between the modern Batman, and Japanese stylings. 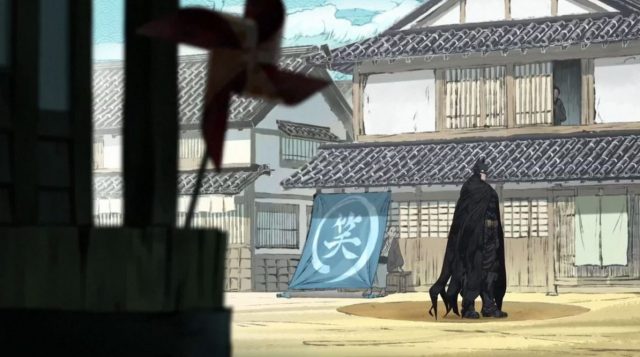 It clearly borrows heavily from traditional Japanese painting, and this makes this movie look and feel incredibly unique. The dark, bold lines set it apart from your typical character designs; combined with the exaggerated colouring, help to immerse you in the setting and brings the artwork to life. 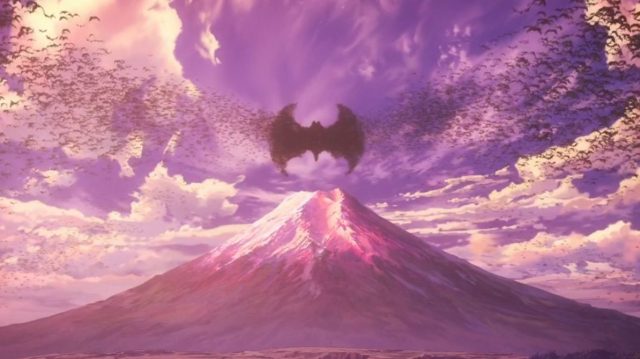 The art style also fluctuates a little, to match the mood of the scene, from the bold-looking action pieces to the more toned-down emotional scenes. Notably, at one point the art style shifts to a completely different, softer one, to reflect a particular character’s mental state. 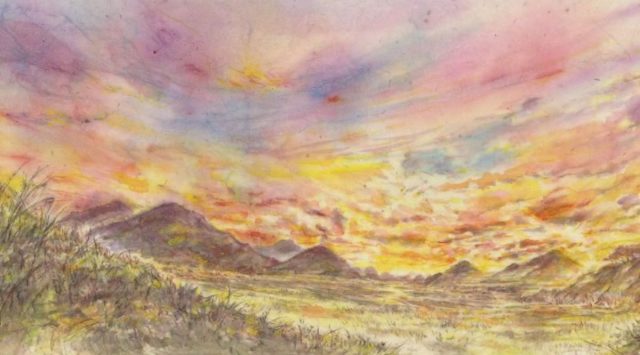 This movie is filled with absolutely gorgeous scenery of Japan, and some images that blend that with the Batman mythos so smoothly, that you’ll be left astonished.

In terms of the action, that’s something that Batman movies always deliver on, and this is a standout example. The fight scenes clearly borrowed heavily from anime, from the one-on-one battles, the huge group face-offs, the close-quarters fistfights, and even the huge battle between Megazord-esque giant robots. It’s truly some irreplaceable Japanese awesomeness. 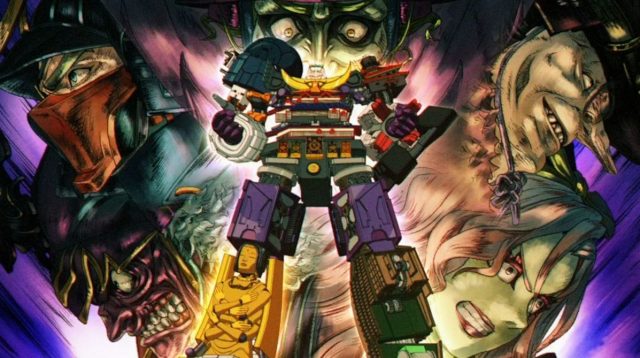 It’s a case of transferring the best part of one genre to another – the way the fight scenes are cut together make them more intense, exactly the kind of creativity that you’d expect from a Batman movie.

And how could you have a Batman movie without cool gadgets? While it’s obviously really misplaced in the setting, it’s still cool as hell to see Batman utilising a full bat-themed arsenal against his enemies. The animators really took this opportunity to pull off some truly impressive visual feats. 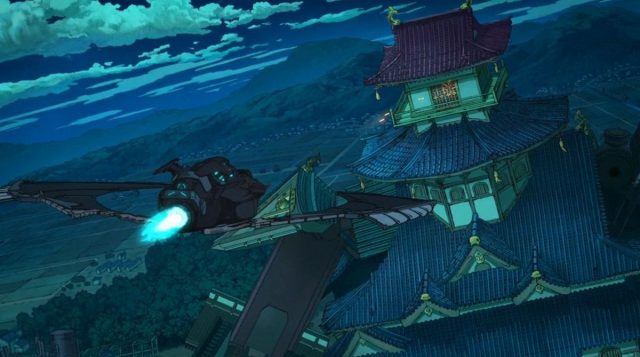 Other positive things: the Joker is…okay? If you’re a fan of the Joker, you’ll appreciate the gratuitous amount of screentime he’s given. That nasty clown is everywhere, foiling every plan, monologuing loudly and just splashing his face all over the screen throughout the movie. The movie encapsulates the sheer chaotic energy of the Joker pretty well. 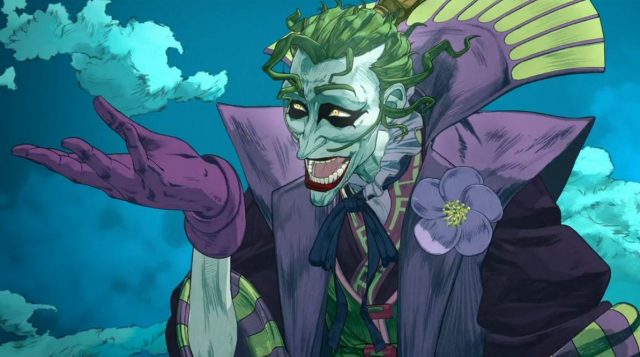 Now… for the bad stuff.

Let’s start with the Clown Prince of Crime. There’s a sense that the creators of this movie were trying to capitalise on literally everything they could think of that fans liked about Batman, and the Joker is brought to the forefront repeatedly, to the point of it being excessive and straight-up annoying.

It’s a portrayal of the classic Joker, and it’s done alright, especially with the art style to elevate it. He schemes, laughs and causes chaos, but it happens too rapidly and too frequently for it to have any real impact. Nothing creative or new is really done with him as a character – he acts precisely the way you’d expect the Joker to act, with little to no surprise every time the story drops a “plot twist”. Even if you’re a fan of the Joker, this just feels stale.

And on that note, there are six villains in this movie. Six of Batman’s and one of the Flash’s most notorious rogues, and for what? Barring the Joker, they just appear, say a few lines, and contribute their giant robots to the Rogues’ Megazord at the end. And that’s it. They really don’t do much in the story, and it just feels like a cash grab more than anything. 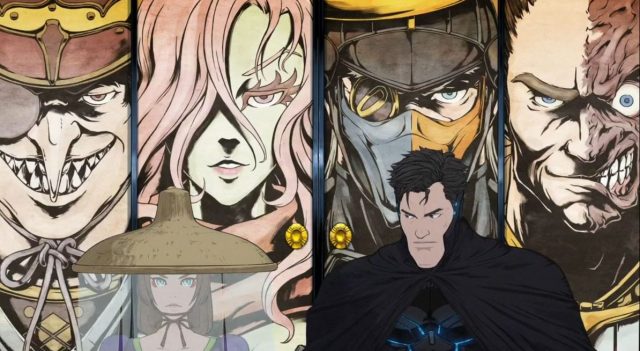 And that doesn’t just extend to the villains of the story. This movie features the full cast of Batman’s proteges – current and former Robins, from Nightwing, Red Hood, Red Robin, and Robin. But they’re just….there? They’re more like props than actual characters, and for the little characterisation that they do get, all of them are played as horrifyingly out of character. 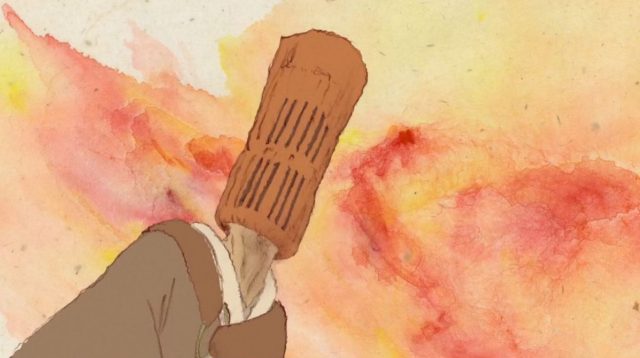 Nightwing and Red Robin seem to exist just to fill space. Red Hood gets his moments of bitterness over the Joker (because, as we all know, Jason Todd was murdered by the Joker and is naturally forever bitter, but somehow he’s also unquestioningly allied with Batman. He also wears a red paper lantern for a head because we are continuing the time-honoured tradition of putting Jason Todd in stupid helmets), but Robin is the focus here. Holy smokes Batman, this Robin is bright and chirpy, and a childish plot device for a later plot point that just makes zero sense if you think about who this Robin really is. For those not familiar with the current Batman comics, or even any of the recent animated DC movies, the current Robin is Damian Wayne, a terrifying child assassin and son of Batman and Talia Al Ghul. Admittedly, he can be childlike, but nowhere nearly as carefree as the Robin in this movie. Who is this, and what is with that hair.

Worst of all though, is the plot. Stuff happens in quick succession, one after the other, tossing the characters in all sorts of directions with little time for anything. Everything that could possibly happen, happens. From Joker plots to monkey armies to giant robots, this movie pulls every trick in the book, but it feels jarring, and incredibly messy.

The villains’ motivations are consistent, but the heroes seem to lose focus more often than not, and nothing really helps them to stay on task. Perhaps it is a deliberate exposing of Batman’s flaws, but it makes the movie feel directionless and abrupt. 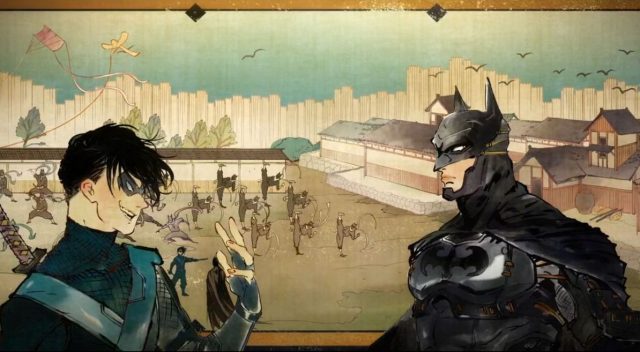 The story does take some valuable time to breathe, which is something that current movies often lack, but those moments were haphazardly placed in between the action, making the movie feel less like a whole movie, and more like roughly cut-together action pieces.

Ultimately, this movie is a hodgepodge of things that Batman fans enjoy, but doesn’t come together that well as a cohesive whole. Still, the execution of individual elements are decent, so if you’re there for the visuals and the action, this movie is an awesome exploration of combining both Japanese and Western styles. Just don’t expect to be wowed by the characters or storyline.

Batman Ninja definitely something worth seeing, but worth watching? Debatable. Especially if you’re looking for any kind of depth.

Chapter 1 of the new DCU is titled 'Gods and Monsters'.