Audi’s A6 began life in 1968 as the Audi 100, and it has been a major contributor to the company’s success through five decades of production. Now in its eighth generation, the smallest (relatively) luxury car in Audi’s full-size class (comprising the A6 sedan and Avant forms, A7 Sportback, A8 limousine, and Q8 luxury SUV) brings the company’s vision of digitalisation, electrification, and driver assistance to the executive segment.

At first glance, the A6 looks rather similar to its bigger brother, the A8. Many people could easily confuse the two models until they see the badge at the back – and they still might do a double-take. To the untrained eye, the front fascia looks almost identical in styling with its massive Singleframe grille and HD Matrix LED headlights. The same can be said about the side profile and to a lesser extent, the rear aesthetic, with its dynamic turn indicators and light sequence when locking and unlocking the car.

A feeling of déjà vu strikes you instantly when you step inside. The A6 has the same Audi virtual cockpit behind the steering wheel, adjustable to show a myriad of information in brilliant colours and resolution. It also has Audi’s latest MMI touch response system, with haptic feedback for both tablet-sized screens on the centre console, completing the supposed A8 imitation.

But they say imitation is the best form of flattery, which is no bad thing if it’s luxury and prestige that the A6 is aspiring towards. The Audi A6 deserves its place in the limousine category but unlike the A8 L I reviewed in March (read it here), there is greater equality in enjoyment for all occupants.

For a start, the A6 is a more driver-oriented car, expressed visually by how the centre console is angled towards the driver, and demonstrated by how the car behaves on the road. While still barge-like in dimensions, the A6 is equally at home on the highways and winding B-roads, and feels dynamic and inspires a welcome level of confidence when tracing the lane dividers of Rifle Range Road at an unwise pace. In terms of driving dynamics, the A6 leans towards a more neutral personality but is no less capable than its peers.

The sport seats are slim and lighter than in its predecessor, while providing great comfort and lateral support against the turning forces. Its dynamic all-wheel steering (a S$10,995 option with an automated sunroof) plays a big part in making the front end more responsive; the same steering wizardry dramatically reduces the A6’s turning circle, putting it virtually on par with the much shorter A3.

Although the all-wheel steering makes the car more nimble and precise, reversing into parking spaces needed some getting used to. To make parking and manoeuvring the car in tight spaces easier, the A6 comes with up to 24 sensors and cameras that produce a real-time 360-degree view of its surroundings, displayed on the centre console just like in the A8 L.

With a smaller mass than the A8 L, the same faultlessly refined 3.0-litre V6 TFSI engine – producing 340 hp and 500 Nm of torque – takes the A6 from a standing start to 100 km/h in 5.1 seconds, easily leaving most cars in its wake. Despite the impressive acceleration, things in the cabin always feel assured and composed, never frenetic. It’s really a long distance cruiser that quietly takes care of all but your most extreme motoring needs. At 530 litres, the luggage compartment will easily carry a family’s belongings for a few days up north.

Under less hurried circumstances, the A6’s 48V mild hybrid system allows the car to coast between 55 and 160 km/h, helping reduce fuel consumption by up to 0.7 l/100km. Connected to the camera sensors in front, the system starts the engine – even with the brake pressed – once the front camera detects the vehicle ahead starting to move, intelligently reducing the time needed to move off.

The S tronic quattro powertrain, comprising a seven-speed gearbox, comes with ultra technology, allowing the car to maximise traction and driving dynamics while delivering optimum efficiency. In other words, it’s all-wheel drive when you need it and front-wheel drive when you don’t – all activated and deactivated by electronic systems and sensors.

But for all the well-mannered grace that the Audi A6 delivers, it isn’t without its issues. I found the handwriting function agonisingly slow when entering destinations into the car’s navigation system; the need to scrawl each alphabet or numeral on the touchscreen with my non-dominant hand and wait for the voice response to inform me if it’s registered correctly takes too long. It’s not a deal-breaker though, as Audi still provides an on-screen keyboard as an alternative. The tablet-like screens on the centre console present the same challenges of collecting fingerprints and smudges as with the A8 L that I reviewed. The steering wheel, while accurate, is light even in the car’s most dynamic drive setting, although this is unlikely to concern most prospective owners. I’m not sure they’d care that the dual ‘tailpipes’ on the rear bumper are fake either, but it is what you’re paying for.

Against rivals like BMW’s 5 Series and Mercedes’ E-Class sedans, Audi’s A6 is possibly the most technophilic luxury sedan with its implementation of digitalisation, electrification and driver assistance features. If anything, Audi’s line-up of full-size cars seem to be designed around the more technologically-forward driver.

But to argue which is the best car to have would be like picking between Nike, adidas and Asics running shoes – each brand caters to a different profile of customers and if you’re going to shell out more than S$300,000 for a car, my recommendation would be to visit the showrooms and experience each of them yourself. Having said that, if you won’t compromise on a V6 engine, then save yourself the trouble and just head straight to Audi Centre Singapore.

While you’re there, you’d be remiss not to visit the Audi Customer Private Lounge, where a world of customisations for your ideal car awaits. But instead of having a physical display of every available option, Audi uses a sophisticated augmented reality (AR) and virtual reality (VR) system which allows you to configure their desired Audi model to your own specific requirements – right down to the leather and stitching options in your upholstery. The data for the system is pulled direct from Audi’s headquarters in Germany and specified to the Singapore market’s models, so if you can spec it in the system, you can buy it. Audi is the first vehicle brand to introduce such a system into its sales process.

Possibly the most technologically-forward in its category, the Audi A6 could also give its bigger brother – the A8 L – a run for its money. 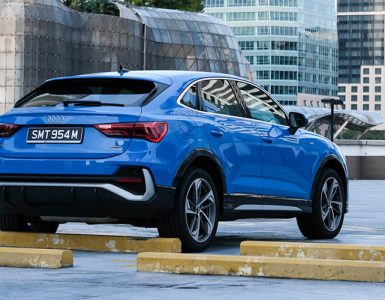