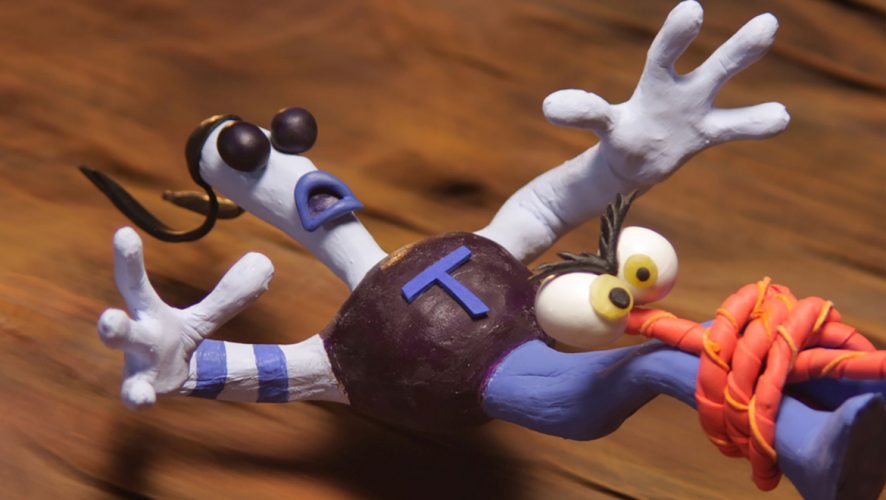 If you’re a fan of Earthworm Jim, and are old enough to remember The Neverhood, then adventure game Armikrog will strike a chord with you, with its distinct use of stop motion clay animation, mixed with a simple point and click interface.

What started as one of many Kickstarter campaigns is actually the brainchild of some of the creators of Earthworm Jim and The Neverhood, hence the similar art style. It being a spiritual successor of The Neverhood probably explains why it scored US$900,000 in its campaign as well.

But unlike the fancy premise of its earlier games, Armikrog is slightly darker in nature. Here, players take on the role of Tommynaut, the last space explorer on the planet, along with his blind alien talking dog, Beak-Beak. They had set off in a space mission to save their home planet from destruction, but have crashed landed on a planet. There, the duo get chased by a flesh eating monster into a fortress name Armikrog, and this is where the game begins.

Players can choose to control either character, but since Beak-Beak is blind, players only get to see the game in black and white. But Beak-Beak is able to see special wavelengths that Tommynaut can’t, so don’t dismiss the pet just yet. 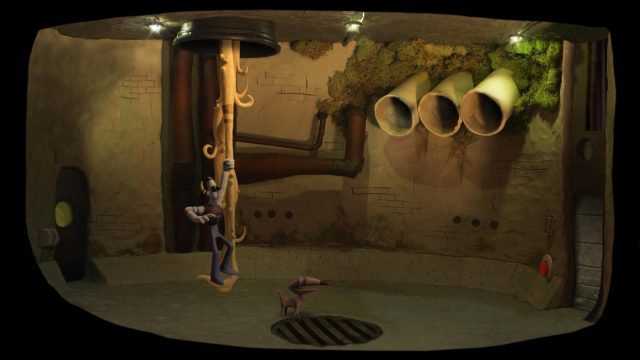 With these premise, Armikrog promises tons of puzzle solving and exploration in a surreal world. As the game has been created for touch devices such as smartphones and tablets in the future, the user interface uses mostly pointing and clicking. But gameplay is far from easy as the game does not highlight or hint at areas or objects where players can interact with, so a little trial and error is sometimes needed. to find your way around.

For the PC version, the game offers a minimalist UI a well, so besides the mouse cursor, there is no Inventory list, no mini maps or any other user interface elements on the game’s screen. Items picked up in the game is just stuffed into Tommynaut, and will automatically come out when needed. Still, the simple UI is no excuse for a game’s poorly designed menu, especially when the “Save” and “Load” screen is actually hidden inside the “Options” menu, instead of being prominently featured on the menu’s front page.

Where the game scores is on the unique art that eschews 3D models. The use of stop motion clay animation for its graphics, from the environment to character models, gives the game a very special visual presence, and the artists involved in the game should be commended, as everything players see has been sculpted and then animated, frame by frame. Even the menus have been rendered in clay! 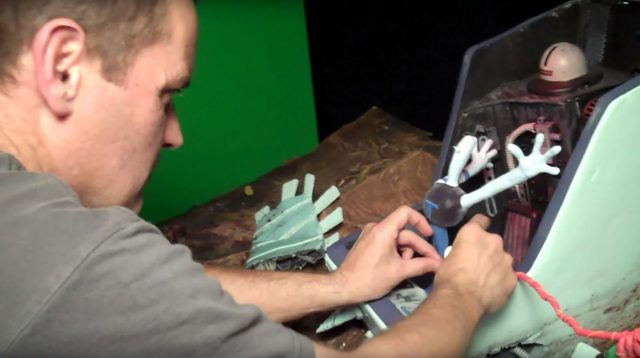 This had paid off as the game immediately looks and feels different from almost all other games out there. 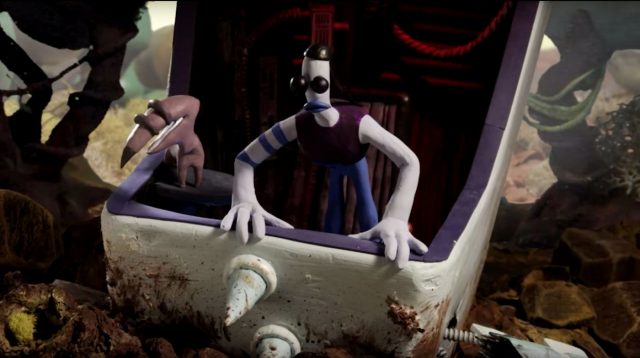 The game’s environment was also really surreal with splashes of colours everywhere. And each of the rooms in the fortress are very distinct from each other. 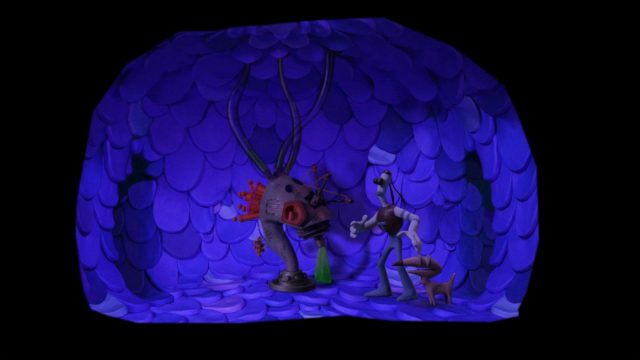 The Puzzles in the Game

This is the foundation of the game and Armikrog offers a wide variety of puzzles. There are some straightforward ones, which are easy to solve, as well as some radical ones that require you to think out of the box, (or even recall a previous scene) Those used to FPS and MOBA games might baulk at the gameplay mechanics, as these type of puzzles can really test your patience.

While I cannot fault the developers for not making players “cheat” by highlighting every important object or clue, it does not help that the use of clay animation tends to make everything blend in the background. As this game offers no hints or clues, it is easy to miss out on critical items as a result, and this means more time is needed to proceed with the game. Also, there are some puzzles which require a bit of memory work, as be prepared to enter a scene, memorise everything, as details from this scene can apply to another scene later on. 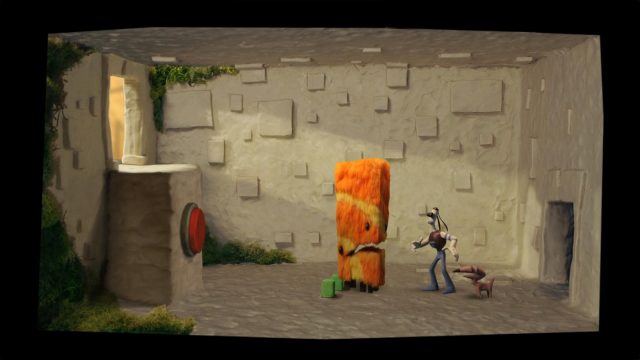 Although the puzzles can get really tough, the unique environment rendered in clay, along with the game soundtrack, are good reasons enough to keep on exploring. The game maintains a certain air of quirkiness and weirdness around it, drawing players to keep wondering as to what would happens next.

Thankfully, nothing bad tends to happen as the game has no “death” mechanic, so players can take their time with it. After playing for a while, my patience grew thin with the tougher puzzles, but what motivated me to play on was this tiny obsession that wondered what could possibly happen next.

As this game offers an immersive experience, I would recommend setting aside a few hours to play this game each time. Oh, and a pencil and paper nearby might help, in case there are notes you need to jot down, to remember stuff required to solve the puzzles.

This could save some time, as opposed to going back and forth to revisit a scene where the clue has been forgotten. Despite its pedigree, this game would likely only appeal to a niche set of gamers who have an interest in quirky visuals and sounds.

The game doesn’t need a high end PC to run, and is currently available on the Steam platform, and you could look forward for the game to be released on Wii U and the mobile game platform in future. 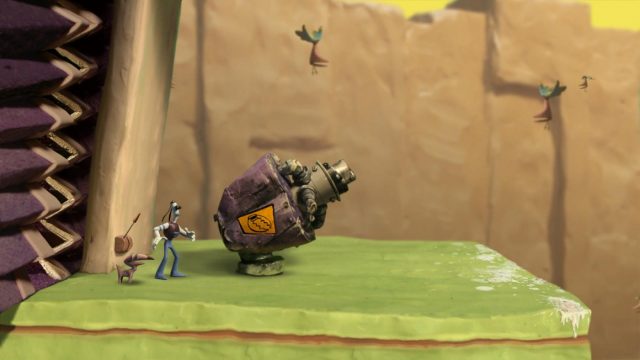 Armikrog’s point and click interface, together with countless puzzles and opportunities in exploration, offers a little something for any type of player. But once the puzzle has been solved, this game has very little replay value, and does not have features meant to encourage a player to replay the game after the first play through.

And despite being the lead character, there does not seem to be enough revealed about Tommynaut’s character and his backstory. At least tell us why he has a blind creature as pet.

But unless you are a fan of the Neverhood series, or love claymation a lot, it would be unwise to buy Armikrog now. The game has room for improvements, such as the inclusion of Steam Achievements in a Steam game, and until those improvements have been made, there is no strong push to pick the game up immediately.

Armikrog’s point and click interface, together with countless puzzles and opportunities in exploration, offers a little something for any type of player. But once the puzzle has been solved, this game has very little replay value, and does not have features meant to encourage a player to replay the game after the first play through.