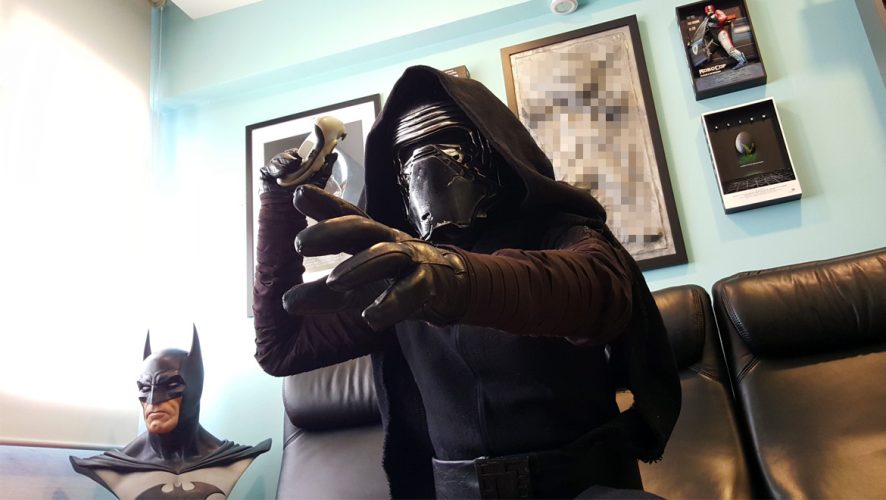 Given what we saw in the original Star Wars trilogy, and from the recent Star Wars: The Force Awakens, it seems that Obi-Wan was wrong, and Yoda was right all along.

Rey is now the New Hope that everyone (including us fans) is counting on, so where does that leave Kylo Ren?

And his agony will be your triumph, as Geek Culture is offering an epic April giveaway to fellow geeks in Singapore.

We are giving out 4 prizes in total:

All of the prizes are featured in the video, so see if you can spot them. The question is, how do we give away these prizes to the most deserving geeks?

If you want to win a Xbox Elite Wireless Controller, answer this question:
In the video, which Star Wars character has been frozen in carbonite on the wall behind Kylo Ren.

If you want a Secretlab OMEGA, answer this question:
In the video, name the different tools/weapons Kylo Ren used to destroy the controller.

If you want the Dark Souls III Collector’s Edition, answer this question:
Name the demon that Kylo Ren kills at the end of the video using the Xbox Elite Controller.

This giveaway is open to all who are currently residing in Singapore and closes on 28 April 2016 @ 23:59hrs. The 4 lucky winners will be announced right here on 29 April 2016 and contacted via email.

READ ALSO:  All Cinemas In Singapore To Close Until 30 April; Here's How To Cope

With interchangeable control pads, customisable buttons and an app that allows each and every button, stick and pad on the controller to be tweaked, the Xbox Elite Controller gives players an unparalleled level of control over their games. You can read more about it via our review here.

This is the most comfortable chair you can hope to own. Made with high grade PU leather wrapped around a sturdy yet comfortable cold cure foam, the Omega offers extreme cushioning and comfort for gamers. With a full length backrest incline, you might not even want to get up from your gaming sessions. You can read more about it via our review here.

The latest sequel in what is regarded as one of the most difficult game series ever made is now available in a special Collector’s Edition that comes with a 10-inch Red Knight Statue, Prima Starter Guide, official Dark Souls III soundtrack, official art book, cloth game map, collector’s box, and of course, a copy of the game.

READ ALSO:  Shopee Men's Sale Is Back With Deals For Us Geeks

Geek Culture would also like to thank the great folks at Genesis Motion Design, a motion design studio based in Singapore. More than just a video production company, the team at Genesis Motion Design incorporate motion graphics, animation, visual effects, sound design and music to their production work, to create unique concepts for their clients. Founded in 2015, the team offers a one-stop solution for your visual needs. (The appearance of Kylo Ren is not included, but can be catered for. Depending on his mood.) – www.WeAreGenesis.tv

Since you’ve managed to come this far down, here’s a bonus behind-the-scenes video, just for kicks. 🙂

The best of the Black Series range yet.

Shop till you drop with Huawei Pay.

Get ready to blast some clankers!

Now Is The Best Time To Launch Disney+ In Singapore & Asia