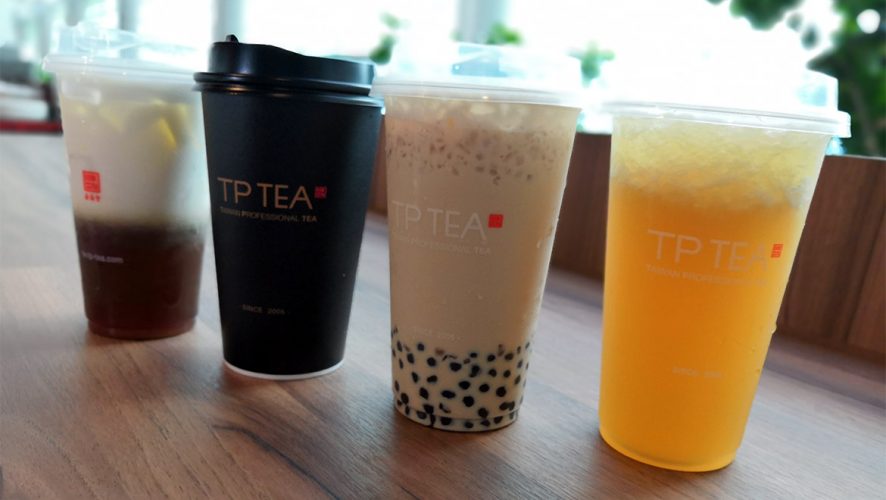 There is already a wealth of bubble tea stores in Singapore, but Singaporeans still can’t get enough of this tastea drink. Well get ready, as a new contender is here to enter the fray, with the opening of TP Tea (茶湯會), a brand straight from the motherland of bubble tea, at Changi Airport Terminal 2.

Established in 2005, TP Tea (which actually stands for Taiwan Professional Tea) is one of the top bubble tea chains in Taiwan, with over 260 stores there. It boasts a rich tea heritage all the way back in 1987, starting with its tea house parent company, Chun Shui Tang (春水堂). This was the company who pioneered the use of tapioca toppings, aka pearls, into the tea that fans now know and love. 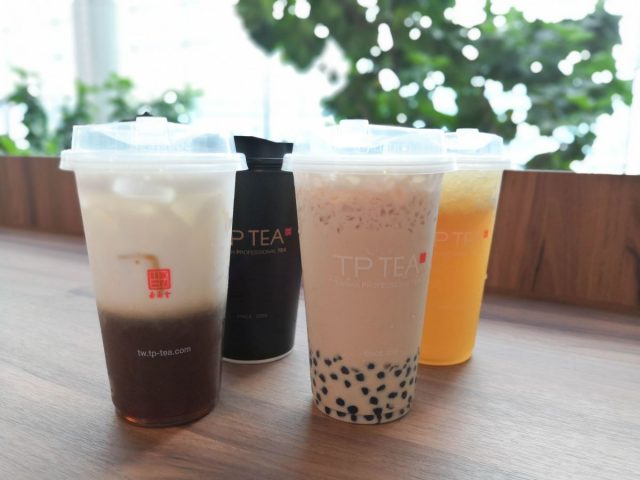 The recipes have been carefully tested and calibrated for Singapore, taking into consideration the varying qualities of water and milk here compared to Taiwan. Hmm… did you know that the milk sold here is considered to be more full-bodied than the ones in Taiwan, hence the need for slightly less sugar in its signature milk tea?

The pearls are made of pure tapioca and crafted with traditional methods, with each batch being prepared and served within three hours to maintain freshness. They have also been shipped in from Taiwan for use here, unlike other tea brands that might obtain their leaves direct from their principle brand owner, but source for other items such as sugar and tapioca pearls from local suppliers, to keep costs low.

It all sounds a little too good to be true, so us bubble tea enthusiasts at Geek Culture headed down to Changi Airport for a taste test to see for ourselves!

TP Tea’s Premium Green Tea is brewed from a special blend of tea leaves, roasted in Taiwan and shipped to Singapore for authen-tea-city. The taste of this unique tea blend is robust, with a slightly bitter aftertaste. Yet, you can easily embrace the overall punch of the flavour, aided by  a natural foamy top. It’s also not too tea-rribly sweet at a 100% sugar level. 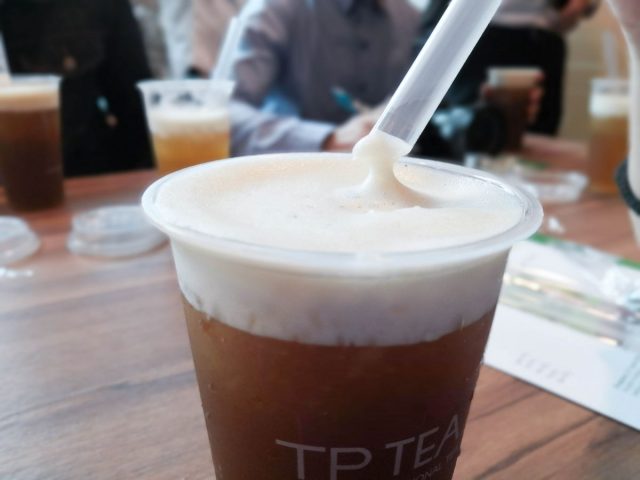 Premium Oolong tea leaves for the signature Tie Guan Yin drinks are roasted and shipped from Taiwan as well. Just from the first sip, the Tie Guan Yin tea (S$2.90) hits you with a strong and bitter flavour, even at 100% sweetness, so this is definitely not for the faint-hearted. It’s a rich tea taste you would associate with freshly-brewed loose leaf tea, and not something you would expect from a bubble tea store.

And if the pure tea flavour is too overwhelming, which is what TP Tea is known for, there’s TP Tea’s best-selling drink – the Tie Guan Yin Tea Latte (S$4.60). Arriving with the tantealising gradient of foamy milk and dark tea, just stirring the drink is a sateasfying experience. The tea is smooth and creamy, making it a sweeter alternative to the Tie Guan Yin tea.

To get the full flavour of the tea, you first pop open the cap and have a sip of the foam, before taking a sip of the tea via the straw. Next, stir it up and enjoy the beverage in a third, unique way. And did we say this is healthy? Yep, none of that cheese tea nonsense to be found here.

Next up, Pearl Milk Tea – the simplest drink, and yet the most important one to get right.

Having returned from a trip to Taipei not long ago, the Pearl Milk Tea in TP Tea Singapore tastes very similar to the Pearl Milk Tea I got from TP Tea in Taiwan, and it is tea-rrific. The tea is thicker than normal, creamier than most, and perfectly complemented by the pearls. TP Tea is proud of their pearls, and rightfully so, as they are soft and chewy, neither too big or too firm, and are among the best pearls I’ve had. 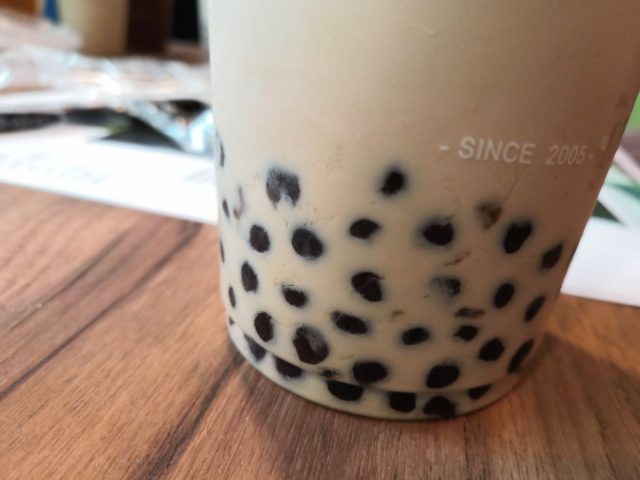 If you still need more than just Pearl Milk Tea, TP Tea has come up with a rari-tea here, and gone one step further with their Pearl Milk Tea Soft Serve Ice Cream (S$3.60).

While the base ingredients for both the beverage and dessert are the same, the taste of the tea as an ice cream is a little different from the drink, as it’s parteacularly silky and smooth. The flavour is well-balanced and not too sweet, coupled with the same soft pearls it makes for a great treat. And in case you are wondering, this ice cream is only available in two outlets in Taiwan, and the folks who brought it to Singapore says that not every outlet here will serve this.

And before you ask, they say that the Tie Guan Yin Soft Serve Ice Cream is coming soon, but won’t say when.

For a cold rainy day, the hot version of the Pearl Black Tea Latte with Red Beans (S$5.30, same price for iced) is a comfortea-ing drink. The warm pearls are even softer, and the toppings infuse the black tea with a distinct red bean flavour. While most folks think of red beans as a more suitable cold dessert offering, the use of this traditional item in a hot tea produces a flavour that complements the tea, and adds a layer of texture to the beans. You have to try it for yourself. 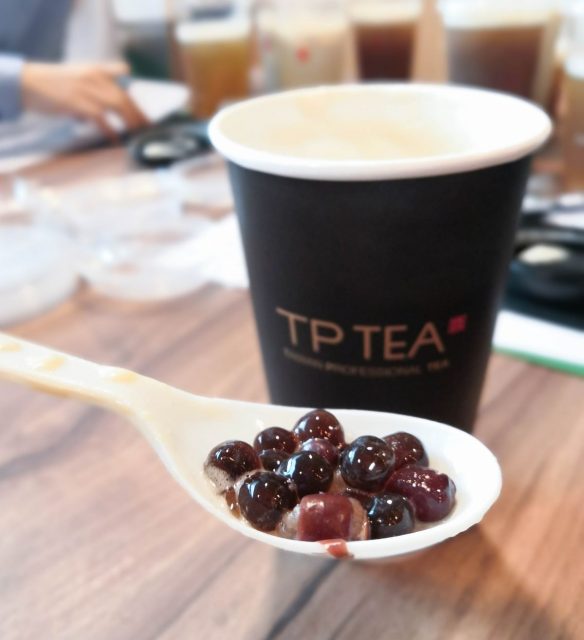 Going from sweet to sour, the Honey Lemon Drink offers a refreshing burst of flavour. It’s made from lemon juice squeezed from Grade A lemons in Taiwan, and shipped frozen to Singapore. Honey is then added, to balance the sourness and a generous amount of crushed ice tops off the cooling drink. 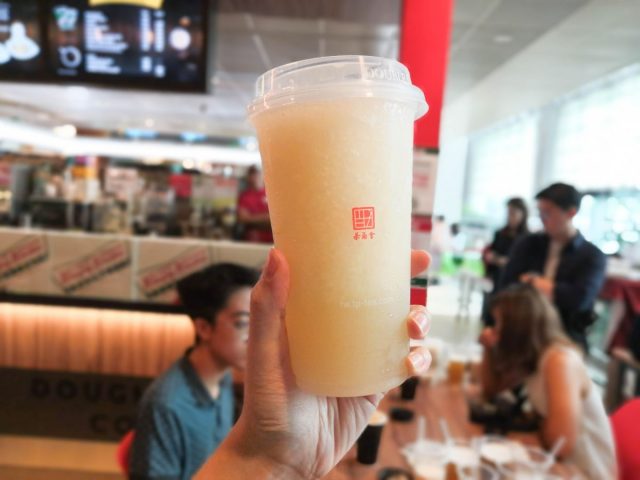 The taste of honey taste is undetectable though, and the drink is more like a lemonade instead, with an intense lemony tang that really quenches your thirst. 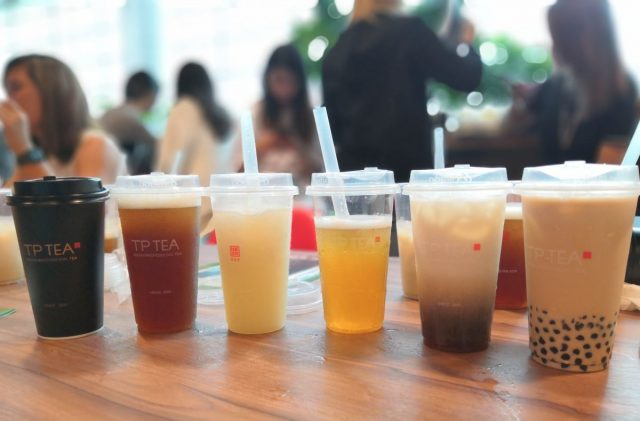 TP Tea will start serving its brew-tea-ful drinks at its first outlet in the departure hall of Changi Airport Terminal 2 at 6pm on 27 June 2018, with plans to expand and open more stores in the coming year. Watch out, Gong Cha and KOI!