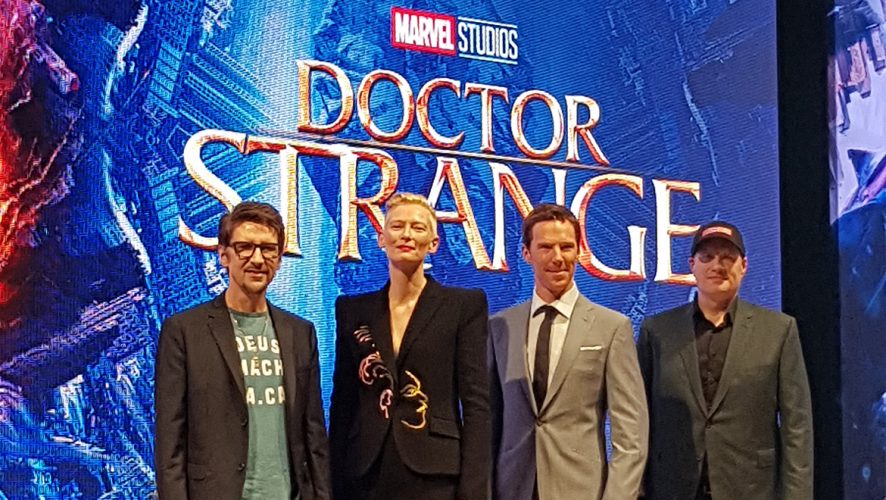 Doctor Strange – Scenes from the Red Carpet in Hong Kong

The Doctor is in!

Crowds of fans lined the red carpet at the Hong Kong Cultural Centre Thursday night, grabbing front row spots and hopeful for a glimpse of the stars from Marvel’s upcoming Doctor Strange. Some camped out as early as in the afternoon, holding on to handmade signs declaring their love for Doctor Strange, while others held up posters, hoping to get an autograph.

Luckily, Geek Culture was invited to the red carpet for the Doctor Strange Asia Press Junket event, which saw director Scott Derrickson, President of Marvel Studios Kevin Feige, producer Steve Broussard and the stars of the movie, Benedict Cumberbatch and Tilda Swinton, make an appearance, as they did a Meet and Greet with their fans against the Hong Kong skyline.

There is a significance in the choice of location of course, because the city and its skyscrapers are featured in the movie’s most gripping scenes. And Kevin Feige made no secret about his love for Hong Kong when addressing the fans. You can catch some highlights of what he said, as well as a short interview with the stars and the director, in the video below.

The stars walked the lengthy red carpet slowly, greeting fans, signing autographs and taking wefies with legions of adoring fans. At one point, it started to drizzle but the stars were unfazed, as they continueed to smile at flashing lights from cameras, and stopping to field questions from the media.

Here are some snaps + video that we caught.