Cats have nine lives, so technically their chances of surviving a heart attack are nine times better than humans.

Well, we’re not sure that it applies in the ninth iteration of Halloween Horror Nights at Universal Studios Singapore, which runs on weekends from September 27 through October 31.

Every edition of Halloween Horror Nights (HHN) brings something unique to the fore, aside from its unique, longstanding tradition of incorporating traditional Asian horrors into the month-long affair. HHN7 brought us K-Pop, HHN8 gave us Stranger Things, just to name a few and this year, the roster of monsters and all sorts of ghouls has been changed out as well, just to keep things fresh, especially for dogged veterans of this nightly event.

Curse of the Naga

Arguably the showpiece of HHN9 is Curse of the Naga, a haunted house built with the combined imagination of two Thai horror film masterminds, Parkpoom Wongpoom and Gunn Purijitpanya. If their names sound unfamiliar, their works won’t be as they are the grotesque brains behind the horrific masterpieces, Shutter and 4bia. This year’s HHN also marks the first time USS will be featuring a regional collaboration, which speaks volumes of the theme park’s ambitions.

In any case, Curse of the Naga transports you and your friends from the streets of Bangkok to a lost village which is under the thrall of the titular snake spirit. Just by looking at the place, you could tell a lot of love and effort has been put into creating a world within a world.

Even if you’re not a fan of horror, this is quite a sight to take in; from the various twisting branches and roots wrapping around houses, to colourful lighting and wall murals that resemble snakeskin, it’s all about drawing you into an illusory experience, as is characterised by the Naga’s penchant for luring its victims in for the kill.

And speaking of the Naga herself, you’re more than assured of your money’s worth that she’ll appear when you least expect it.

From the Land of Smiles, The Chalet Hauntings is something a little closer to home, and this time brings your secondary or tertiary school days to life, as it literally puts you in a chalet (because no one actually visits one after a certain age).

While not the most visually striking of entries here, this chalet setting does evoke a sense of familiarity as it’s where many Singaporean youths tend to spend their school holidays at, sharing tons of ghost stories while they’re at it. The catch here is that there’s an interactive scenario where you’ll need to unravel the fate of five teens who have mysteriously disappeared.

And, in typical HHN fashion, you’ll see a host of local horrors as well as others from the rest of Southeast Asia creep up behind you, in front of you, or snag you from the side as you go about your investigations. From the diminutive but demonic Toyol, to the horrific Langsuir, there’s no end to the frights you’ll get as you navigate the confines of the small chalet.

READ ALSO:  Top 8K PlayStation 5 TVs To Get The Best Eye Candy Out Of Your Next-Gen Games

If local monsters aren’t your cup of tea, then perhaps clowns are. The Twisted Clown University is where the resolve of those of you with a phobia of clowns are tested.

The carnival setup is nothing original, but the idea of seeing demonic clowns is always a fresh experience. The catch here is that, as its title suggests, the interior is all decked out to ape that of an educational institute. From the moment you step in to the moment you leave, class is always in session with these clowns (pun intended?).

Furthermore, HHN’s penchant for including hidden spaces for scarers to jump at guests is always ingenious, and their ability to anticipate your second-guessing is, well, second to none in this case. Pennywise from IT will most certainly be at home here, especially after his escapades in IT: Chapter Two.

Hell Block 9 is kryptonite for the claustrophobic. Set in a dark, dank prison (much akin to what one might imagine Changi Prison could be if supernatural forces actually took over it and manifested in the physical world), this area is chock full of cramped spaces and corridors.

Walk across one and you’ll be greeted by a horrific chorus of screams and shrieks, as its many deceased denizens spring to life (or unlife, as you were) as they reach out for your help from beyond the prison cell bars, as they get brutalised by the demonic prison wardens that walk these enclosed halls.

Rounding off the trio of phobic attractions is Spirit Dolls (we don’t think this type of fear warrants an explanation now, do we?).

This particular locale is set in another abandoned village, where its inhabitants are all silent dolls watching your every move, without ever batting a single eyelid. If that’s not creepy, then expect a couple more… physical surprises as you walk through it.

If all this scaring has run you ragged, perhaps the new Skin & Bones live comedy show might offer a moment of respite for your weary soul.

Hosted at the Pantages Hollywood Theatre, this show is fronted by the titular undead comedic duo, Skin and Bones. As they exchange witty one-liners and “your mom” jokes, they also bring you a wide variety of entertainment, such as dancing, singing, as well as a sword-eating show by the Devil herself.

But if you need something a little more gritty, then the Death Fest might just be what you’d bang your head to. No, literally, as it’s a death metal procession, with the music provided by a band from hell, heralded by its demonic frontman, Death Trap.

Only appearing on peak nights, the procession is hoisted atop a series of specially-designed floats, which feature not just the band and their blood-curdling metal music, complete with its own demonic fans constantly screaming and banging their heads.

On top of that, it also some visually-stunning special effects and pyrotechnics (and possibly even a dark ritual involving a human sacrifice) to bring some light to this event wholly focused on blood, guts, and a head-banging good time.

As you make your way across the grounds at HHN9, you’ll no doubt have seen a couple of themed areas littered with more ghastly ghouls. The first of these is the Death Fest, which is also part of the abovementioned Death Fest procession, in the New York zone of USS. Here, you’ll be greeted with a slew of spooks and frights as the undead accost you from angles you’d least expect

.The next one is the Dead End scare zone. The Lost World area (where it’s at) has been taken over by the undead, as it is littered with coffins. You’re encouraged to open them to see what’s inside. Or better yet, they’ll open for you so you can focus on being scared the pants out of.

Also, there are a ton of photo-taking opportunities in coffins, so you can preview how you’d look on your deathbed, if you’re that sort of person.

Another distraction from all the spooks around HHN9, there is a new addition, the Carnival. In it, you can take part in some classic carnival games to stand a chance to win some prizes, or just offload your pent-up jitters with the various throwing games.

Just make sure to always watch your back, as some demonic jesters might just steal your fun away.

Many of us are well and truly familiar with the surprises Halloween Horror Nights is capable of, and this year’s edition, by far, is their most ambitious one yet.

In any case, here are the dates for HHN9, complete with the peak nights, if you want to catch all the live shows in one go: 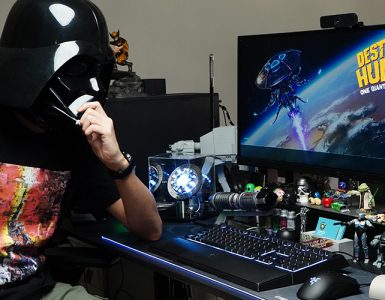 Take a quick tour of our new Batcave of sorts, if you will, as we show off the geek workstations of each one of us here.