Hype can be a dangerous thing. One moment, you happily announce a trio of games for an RPG series like Final Fantasy back in 2006. Then it turns out that the first game didn’t sell as well as expected, so you delay the other two, and make them separate from the intended shared universe.

That’s Final Fantasy Versus XIII in a nutshell. It got stuck in development hell, and has now been reworked and rebranded as the 15th mothership title in the series.

But let’s not forget that this is Final Fantasy – a series renowned for its pretty boys with giant swords, giant yellow birds, actual giants, and comes with a large and passionate (or rabid and vocal, depending on perspective) fanbase. It’s so popular that Cloud/Sephiroth slash fiction were actually trending back in 1997, way before the concept of “trending” and “social media” made marketers today excited in their pants.

So what’s there to look forward to in Final Fantasy XV? Here’s what we gathered based on the first few hours of the PS4 final build of Square Enix’s magnum opus of 2016 (thanks, PlayStation Asia!).

The Final Fantasy series have always flirted with the open world concept (see FFVI, VII, VIII), though the concept of open world to a Japanese developer feel more like an illusion, because most of the games have one set story path and ending.

In FFXV, we see shades of Grand Theft Auto, with open world levels and vast lands for exploration. The game is trying to emulate what it feels like to explore and camp in the wilderness, and patient seekers will be rewarded with secrets and hidden areas.

As soon as news of war erupts in the world of Eos (which should happen after an hour’s worth of gameplay), the later areas like Duscae will be more populated, and will have more monsters ambushing you. Players will also get more hunting missions to partake in, for extra cash and rewards. There will also be some side activities like fishing that can help boost your stats in combat when resting.

This all sounds like bold new territory for Square Enix, but long time players would have seen these features almost a decade ago, in other games. So far, the above gameplay mechanics have some merit, and can help lengthen gameplay in not-so-artificial ways. Here’s to more activities, and more distracting side quests, in the full game.

There are some caveats that set FFXV apart from your usual open world games though. You can’t drive your party’s black car off course from the road, and no, you can’t jack other cars, pull smash and grabs, rob people, or even hold them hostage (as far as we know).

You can make your royal car fly later in the game, which we guess is kind of a trade-off, and a reward for all of your exploratory efforts. Speaking of which…

#3: There’s Going To Be A LOT of Walking

This whole bit of FFXV may not gel with everyone, but let’s not forget that the best open world games and RPGs require you to invest yourself in the journey. It’s not about what’s the end of the road people…. While FFXV’s fast travel options are limited, we think that having too many options may cheapen the immersion of exploration and discovery.

Based on the few hours we had, there are a lot of things we wish we could do more of, like fishing, riding on chocobos, and listening to more banter and conversations from the party. The walking bits do get in the way, and can waste unnecessary time for those who want to just get through the game. Though to be fair, all of these design choices are necessary to keep the exploration aspect of FFXV intact.

Now, if Square Enix has a patch that can make Noctis sprint endlessly, we’ll be eternally happy. For now, renting a chocobo just like in the old games is all we get for faster mode for travel. (Yes, even with a flying car, where you’re going, you need roads and lots of it) And if you’re one of those who whine about how in-game exploration just slows things down, you have clearly not played an Elder Scrolls game my friend.

The combat in FFXV is tailored to mirror that of a pure action game. Players attack, dodge and parry, cast spells and use a party’s special attacks. Players can also use the Warp Sword ability, to carry sneak-attack on enemies, or even warp to a higher vantage point and strike from above.

Hold R1 to lock onto any enemy that players want to Warp Sword or focus attack on. That’s it for real-time combat, and the whole package feels smoother, more intuitive and flexible in the final build.

Naturally, there is just one nitpick – the fights do get a bit claustrophobic when they take place in dark basements and caverns. There, the camera can get zip around all over the place if players are not too careful, but otherwise it’s more of a nitpick than anything. As long as FFXV tosses out some giant bosses and kickass nemesis’ to battle, there’s nothing to worry about in terms of combat.

Leveling up in a Final Fantasy game is the norm, but here in the 15th game, players can upgrade absolutely everything they own.

Leveling up a party is a little more different than usual. Players have to rest at a campsite or lodge, to cash in on their earned experience points. It’s kind of like an offline session of Dungeons & Dragons when you think about it. Players can also customize and acquire more skills for Noctis and his party via the Ascension system.

The Ascension system is a bunch of tabs containing mapped charts where players cash in Ability Points (AP), to unlock abilities like hard-hitting attacks, magic specialization options, and even better team synergy. It’s similar to the Sphere grid and Crystarium table in past FF games, but far less complicated and convoluted. We bet that after 20 to 30 hours of sidequest tomfoolery, players will definitely have a rogue party that can take down monsters 10 times bigger their superior.

Also, if players know where to go, they can upgrade their current weapons and even the car they drive.In other words, this is the status quo of a Final Fantasy game, which provides a window of opportunity to be ovepowered and tear through the game post-story.

The launch update for FFXV will feature a Day One patch that will make it compatible with 4K TVs. That’s right kids – Final Fantasy in UHD resolution. As for a higher frame rate, director Hajime Tabata said that the team is aiming for that in a December update.

Right now, the game will run between 40 to 50 fps in 1080p mode on a PS4 Pro. The build we were playing ran just fine at 40fps or so, but we figured we would share this here in case it bothers a lot of you.

#7: We’re Still Not Sure Who This Game Is Made For

Don’t get us wrong – FFXV seems fun so far. There is a good dose of action and fighting going on, and that’s balanced out by developing plot points concerning Noctis and his political situation. Seeing Final Fantasy mainstays like chocobos, behemoths, the espers/eidolons/summons, and the fantasy/reality mashup tingles our nostalgic senses.

But here’s where we have to take off our rose-tinted glasses, and bring up the elephant in the room. Who is this game really for? Newbies may get turned off at the constant walking, deliberate slow pacing, and quiet moments, while older fans may not get accustomed to the real-time fighting, which does require a bit of skill now and again.

Heck, older fans may not even have enough man hours out of their jobs and real-life obligations, to play something as massive as FFXV. Millennials, at least the ones who binge on YouTube videos and would rather play a short game like Call of Duty, do not have the attention span for a JRPG that requires you to relax and take your time with.

It’s too soon to tell really but we’ll credit Square Enix for changing the perception of what a Final Fantasy sequel should be. The company has done this with experimental FF games like FFVIII and the Crystal Chronicles offshoots, so this is the litmus test, to see if a new generation of gamers will accept this. 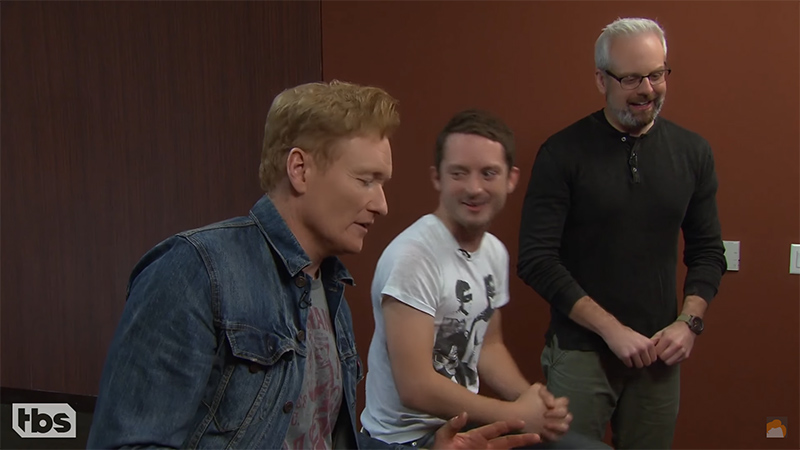 A lot of you probably saw that one video segment where Conan O’Brien played a build of FFXV with Elijah “Frodo Baggins” Wood, and called it an “epic waste of time” and wondered why “anyone would play this?”.

Let’s just assume that it’s what we really think, when we tune in to his show.

Conan’s a great comedian, no doubt about that. But there’s an obvious reason why his segment that featured FFXV was called “Clueless Gamer”. It’s played for laughs and it’s not to be taken seriously, and it is no way indicative of the final product. Unless it’s a talk show talking about Trump, but I digress.

Our takeaway is this – His line about Noctic and company being the Middle Earth Entourage is pretty spot on.

In related news, here’s the obligatory Facebook video about the 13 things we’re looking forward to, in Final Fantasy XV, coming November 29 in Asia.