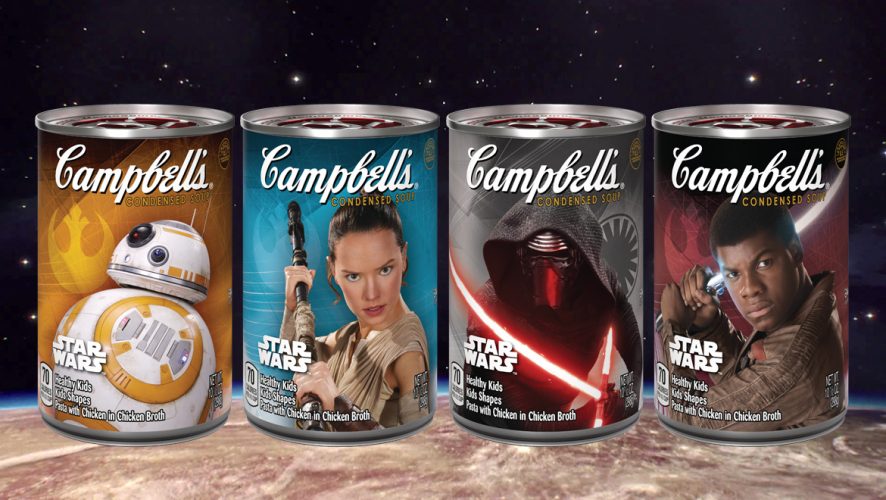 Remember the scene in Star Wars: The Force Awakens when Rey pours some powder and water into a metal tray, and out came a bun/bread?

Well, we may not have instant bread in our real world, but Campbell’s is giving us something familiar, with their version of instant soup, from a galaxy far, far away.

The new limited edition Star Wars soup cans for Star Wars: The Force Awakens features Rey, Finn, BB-8 and Kylo Ren, and completes the circle from last year’s release of Campbell’s Soup cans featuring R2-D2, Chewbacca, Darth Vader and Yoda. These cans are available from mid-May in the US, and were announced this week, to celebrate May The 4th aka Star Wars Day.

(And in case you’re wondering, the contents in each can is Star Wars Pasta with Chicken in Chicken Broth, and it does not contain added MSG, artificial flavors or artificial colors.)

In the meantime, can you imagine what Star Wars would have been like, if they served Campbell’s Soup to the Jedi.

Maybe if Anakin drank Campbell’s Soup, he wouldn’t be so Angsty.

Drink Campbell’s Soup. Live for 900 years you will.

Finish your soup, or Kylo Ren will finish what you’ve started.

Chicken broth? This is the soup that you’re looking for.