We have another LEGO unboxing on our hands, all the way from the West – Journey to the West that is! The Legendary Flower Fruit Mountain LEGO set is inspired from popular Chinese mythology, featuring eight personas of Monkey King Sun Wukong (孫悟空).

This gigantic set comprises 1,949 pieces, which creates three detachable parts that form the Legendary Mountain, where Sun Wukong was born. This set will not only be a long and fun build, but the set is also filled with little surprises that will make it even more enjoyable to play with after completing it.

The eight minifigures portray Monkie Kid, Evil, Macaque, Brother and Sister Monkey, and four versions of Sun Wukong (Baby, Classic, Apprentice, and Battle), offering a wide variety of choices for kids to roleplay the stories of the novel.

The first part of the monkey mountains features a staircase/ladder up the mountains along with a boulder in the clouds. These are not just the regular rectangular pieces stacked up though, as the stairwell is constructed with plenty of curved pieces to give the area a more natural look, along with the ladder itself being attached by clips for a unique angle. With a push and pull mechanism, the unsuspecting boulder can be cracked upon by Sun Wukong himself.

This first part leads to the main section of this grand set. An abundant array of nature surrounds the majestic waterfall that centres the entire board, along with a majestic white-winged bird resting on the summit of the mountain. Accurate to the novel, a tablet, carved by Sun Wukong rests at the mid-section of the waterfall, reads 花果山福地、水帘洞洞天, which means “Happy land of the mountain of flowers and fruit, cave heaven of the water curtain”. That’s right – the set uses actual Chinese words, which is pretty neat.

D-I-Y provided stickers to spruce up the waterfall with water splashes and rocks peeking out from the stream, along with vines on the walls. The water is not just a pretty centerpiece though, a hidden latch at the bottom of the mountain divides the water to reveal a secret opening to a cave.

The novel called this hidden haven the Shulian Cave, a dedicated place for monkeys to train and rest. The entire cave stretches throughout the three parts of the set as well, along with a classy teal spiral staircase leading up to the second level of the cave.

Moving on to the third section, this section is filled with fun interactive parts for playtime. At the front, we have the wood cutting section with a rotatable axe for monkeys to settle their wood-cutting needs. Next to it, there’s a raft with Macaque desperately trying to escape the mountains after an embarrassing defeat to the Monkey King.

Behind them, equipped with a mini-waterfall to keep the zen, a master trains his youngling with a practice fight. Place them on the rotatable platform and turn the gears to see the action break out while the figurines swing their staffs at each other.

Overlooking over the entire mountain, is the Monkey King in his tiger skin-lined throne. Decorating his surroundings is a peaceful peach tree with a rope bridge that links his throne to the Shulian cave.

With a build-time of approximately six hours with three people, this set is a great opportunity to bring friends and family together for some building entertainment. There are some unique shapes and sizes of LEGO that also make the build more exciting and fun than ever before. The entire set measures 34cm high, 68 cm wide, and 25cm deep. The set not only looks amazing from the front, but the back also shows off the great natural form of the mountain. No doubt will it be a great centrepiece for a display case that doubles as a playtime set.

Get this set via LEGO Certified Stores, Lazada and Shopee for S$269.90. 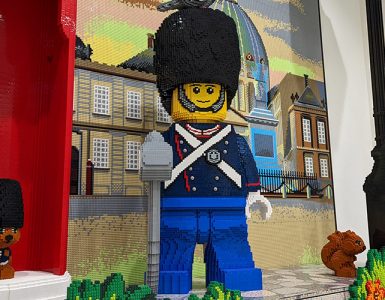