Back in June 2019 when Apple announced the new Mac Pro machines, local filmmaker Chai Yee Wei was bothered by the many comments from regular folks who weren’t the target audience of the high-end professional machine, but felt the need to bad mouth the machine for being overpriced.

Yes, a high-end PC can be had for under US$5,000, so when Apple’s latest machine was priced starting from US$6,000, it set tongues wagging. And when TV makers can offer a 65-inch OLED display for under US$10,000 but Apple’s 32-inch Pro Display XDR is priced at US$4,999, hecklers had a field day mocking Apple users.

In a Facebook post on his public page, the 43-year-old director said, “This machine is priced right. And if you don’t get it, you are simply not the user for it. No need to bad mouth something that is not meant for you.”

He then listed a list of reasons why Apple’s latest machine isn’t meant for the normal user, but geared towards the power user who actually needed the top-end specifications that Apple was targeting. And to him, the Pro Display XDR, which offers a Nano-Texture surface meant to reduce reflections without affecting the overall image quality, 1,000 nits of brightness at all times – with 1,600 nits of peak brightness, and a 1,000,000:1 contrast ratio, is significantly cheaper than his US$30,000 reference monitor, though he acknowledges that the monitor offers some additional features that Apple does not.

But his point is that professional content creators will be more than familiar with the various desktop and monitor options they can choose to have at their disposal, and his weapon of choice is currently the all-new Mac Pro and Pro Display XDR.

“For post-production houses doing high-end post-production work which require heavy rendering of footage constantly and reliably, this machine will pay for itself many times over. Furthermore, compared to the workstation-class machines from other brands, Apple’s new Mac Pro actually comes in very competitively priced while looking much much sexier,” explained the founder of homegrown post-production house, Mocha Chai Laboratory, and the new father of a baby girl.

READ ALSO:  As Cinemas Reopen In Singapore, Here Are Your Blockbusters For The Rest Of 2020

Chai is a Singaporean filmmaker who had his big break in 2008 when he had the opportunity to produce his first feature film “Blood Ties” and it was then that he decided to become a full-time filmmaker. Since then, he has produced three more feature-length films in Singapore, Malaysia and China.

His reason for doing so is because the video editing program he uses, Final Cut Pro X, only runs on Mac and is not available on other platforms. ProRes, the codec that his post-production houses use, also runs best on Mac, hence the decision to develop his films mainly using the Mac Pro.

His latest Mac Pro set-up comes with a 16-core Intel Xeon 3.2Ghz processor with 192Gb of RAM, along with a Dual Vega II Pro 32GB GPU, 4TB of SSD and the Apple Afterburner, as well as an accelerator card which helps to speed up decoding and playback of multiple videos of ProRes and ProRes RAW video files. This set-up costs around S$27,739 but for the independent filmmaker, it’s a steal compared to what those in the film production industry are charging.

According to Chai, a Dell workstation of similar specs will typically cost 5-10 percent more yet come with fewer PCI express slots, fewer Thunderbolt ports, no Apple Afterburner card, and “of course is much less inspiring to look at.”

With almost all major cameras recording in ProRes, the fact that the Mac Pro is designed to help accelerate the decoding of this particular codec makes the Mac Pro a very easy recommendation for Chai. The Apple Afterburner helps Chai free up his Mac Pro’s CPU processors for additional processing.

“With the Apple Afterburner card in the new Mac Pro, cutting high-resolution ProRes files on FCPX is a breeze,” says Chai.

So what can his rig do? How about simultaneously playing six 8K videos on his monitor smoothly, made possible by the Mac Pro’s impressive processing capabilities. With how handy the Afterburner is, Chai advises filmmakers looking to switch their post-production process to Mac Pro to consider adding an Afterburner card.

“For producers and filmmakers, they should seriously consider adding the Apple Afterburner card as an option when configuring their new Mac Pro.”

While such a set up will inevitably cost quite a bit, with the base model for the Mac Pro costing S$8,699 and the Pro Display XDR selling for S$7,299. However, according to Chai, the high-quality performance you will receive far outweighs the cost of the Mac Pro and Pro Display XDR.

“So before you go bashing the price of this system, please realise that you may not be “Pro” enough for it. There are different levels of “Pro” and just because you might not need this level of “Pro”, doesn’t mean there aren’t other “Pros” out there that do. There is your CISCO firewall, and there is your Windows defender. This Mac Pro is of a different level.” 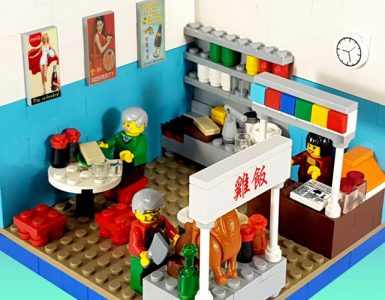 Brick builds that are larger than life.