Soon after Samsung announced its first Galaxy Unpacked event of 2023 — taking place in San Francisco on 1 February — images of the Samsung Galaxy S23 have leaked online.

The leaks come from WinFuture, which reveal both the design and color options available for the base model Galaxy S23 handset. The visuals show off the smartphone in four colours: Phantom Black, Botanic Green, Mystic Lilac, and Cotton Flower. Meanwhile, the chassis itself appears to be the familiar metal frame and glass cover combination we’ve seen on previous models.

The leaks also highlight a triple-camera set-up on the smartphone, which protrude individually from the back of the phone. This makes the S23 more akin to the Samsung Galaxy S22 Ultra, as opposed to the standard Samsung Galaxy S22 which houses the cameras together on a raised island.

The phone’s three cameras were alluded to in Samsung’s promotional teasers for the Galaxy Unpacked event. WinFuture has a pretty reliable track record, but we’ll just have to wait till the event to find out more details about the S23’s specifications and if these leaks prove to be true.

However, if these leaks are enough to spark your enthusiasm, you can always register your interest in this next Galaxy device to receive a discount when you purchase it. 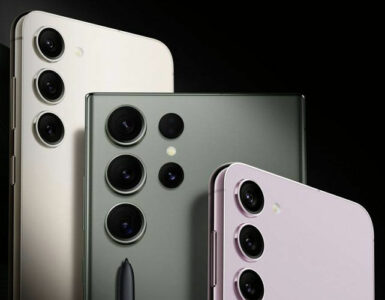