The mirrorless flagship camera market has been enjoying steady growth in recent times, and the Canon EOS R3 is the latest member to join its ranks… well, of sorts.

On paper, the industry giant states that this new offering isn’t marketed as a flagship – leaving that title to the now outdated Canon 1DX Mark III and the R1 that’s rumoured to drop this year – but it performs like one, offering options and specifications that will keep speed – and accuracy – reliant photographers and videographers happy for years to come.

For starters, the R3 touts similar specs to the Sony A1 and Nikon Z9, sporting a 24MP sensor as compared to 45MP and 50MP respectively. Video-wise, the former allows for 6K recording, while the latter two top out at 8K. The biggest difference, however, is that the R3 has now become the first hybrid camera from Canon, arming users with 30fps per second burst modes for added speed, fantastic autofocus performance that can track any moving subjects, great colour renditions, and other bonus features.

While some may prefer a smaller body, like the R5 and EOS R before that, the R3 is designed for professionals, with an in-built vertical grip that houses the battery (LP-E19). This extra size, while not foreign to 1DX and Nikon D series users, does have a smaller footprint than its DSLR siblings, which gives the camera a more compact feel. In a first for a sports camera, the R3 also comes with a rotatable display that would be handy for more creative photography, or videographers who need to use it as a monitor at various angles. Users will be able to enjoy increased battery life and added stability when paired with the great-performing IBIS, courtesy of its bigger build.

The R3 mitigates an unformatted mishap of the EOS R5 as well, offering a fix for the overheating issue that handicapped the latter from being the ultimate hybrid many users hoped for. To Canon’s credit, the R5 has been improved with firmware updates, but the physical hardware limitations remain an issue, especially when it comes to heat management with high quality 4K and 8K video recording.

Over the past three weeks of using the camera in various conditions, we enjoyed the experience and feel of the R3. While there were some concerns with the sensor being only 24MP, its output resembled the image quality of 30-plus megapixels when paired with the impressive RF lenses. We even used the high quality 4K option to record a number of reviews here for our YouTube channel, and the camera produced some of the crispiest images we’ve had to date. Colours are as one would expect from a Canon camera with a tremendous amount of detail.

The only real issues were the inability of the autofocus system to switch between faces when shooting more than one subject, and the new Eye Control technology, which diss not always work as described. This function adds an extra point inside the EVF at the subject in focus, but it feels more like a gimmick in its current state. In fact, the R3 did more than a decent job at locking focus on its own. Additionally, the flip out display doesn’t sit flush to the camera when extended, resulting in the horizon line being thrown off.

Still, there is no arguing that the Canon R3 is the best camera Canon has made to date. It exceeded our expectations, and out of the many cameras we had, became one we tended to pick up more often than not. However, Canon does need to figure out the pricing structure, as this sits above the other flagship offerings while not being an official flagship camera. 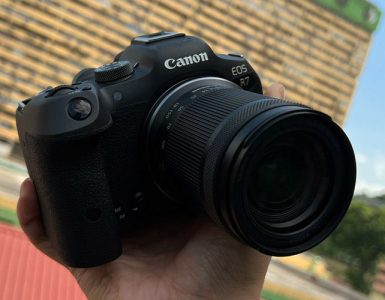