Fans of both the Magic: The Gathering (MTG) deck building game and the Dungeons & Dragons (D&D) table top game can finally experience the merging of the realms, with the upcoming release of the Adventures in the Forgotten Realms (AFR) expansion Magic card set that finally brings the beloved D&D franchise onto actual, tournament-legal Magic cards. It may have taken Wizards of the Coast 24 years (since it acquired D&D back in 1997) years to bring D&D into Magic, but looking at some of the cards in the set, well worth it.

Although the AFR expansion will only be released on July 23rd, we are proud to unveil the first-ever Magic card reveal from Southeast Asia, courtesy of the good folks at Wizards! And it’s perfect, considering how Geek Culture has adopted the Beholder as our icon!

Hive of the Eye Tyrant will be instantly recognisable to D&D fans, as it’s the lair of the iconic Beholders. The normal card is illustrated by one of Magic’s most popular artists, Johannes Voss, who has drawn over 120 MTG cards including the much loved (or despised) Blood Artist and Esika, God of the Tree. He’s even been featured on Tap & Sac’s top Magic art of all time.

And living up to the lore, Hive of the Eye Tyrant is a very playable card. It’s a non-Legendary Land that can be tapped for mana, and even comes in untapped if it’s within the first two Land cards you play. Its best feature is the ability to become a 3/3 Creature with Menace, with the ability to exile a card from the opponent’s Graveyard:

Hive of the Eye Tyrant’s alternate art frame is a nostalgic throwback to the good old D&D adventure campaign modules seen in the early 80s. The art by Tony DiTerlizzi features a Beholder battling an adventurer, most likely in the Hive where these Eye Tyrants live.

Beyond the visual splendour, now comes the important question: how good is it competitively and is it going to see play? One of the biggest lamentations of “cool” and flavourful cards is that they can easily fall by the wayside when it comes down to actual usefulness within the game. Here’s a quick analysis on Hive of the Eye Tyrant’s playability in three popular formats: Standard, Modern, and Commander.

How Good is Hive of the Eye Tyrant in Standard?

Since AFR is a set that is going straight to Standard format, it makes sense to look at it through those lens. Immediately you can draw comparisons to another recent card – Faceless Haven from the Kaldheim set, released in early 2021. Both are Lands with the ability to become Creatures. Hive has Menace while Haven has Vigilance, and both are plenty useful in combat and having the versatility of avoiding Sorcery spells.

With Menace, Hive of the Eye Tyrant can easily get past a flimsy defence, since the opponent would need two or more Creatures to block it. Faceless Haven, on the other hand, doesn’t need to tap to attack, leaving it available as a blocker on the back swing. Most players also forget that with Vigilance, it can be tapped for that extra Snow Mana one might just need to cast more spells after combat.

With Hive only tapping and activating for black Mana, it’s going to be more far more restrictive in the meta, whereas Faceless Haven is a card that is seen in a good variety of decks, from traditional snow decks to even mono-red aggro. Every colour has the ability to generate Snow Mana, and that makes Haven so much more versatile.

There’s also a much higher chance that Hive will come in as a tapped Land and that would slow down a player’s game plan. Haven comes in untapped, and although it can only make colourless Snow Mana, in an actual game it often doesn’t affect the player’s tempo or game plan.

How Good is Hive of the Eye Tyrant in Modern?

In Modern, gameplay is fast but the format has seen the use of Land/Creature hybrids (known as Manlands) in the past. Cards like Raging Ravine and Celestial Colonnade also have activated abilities to become Creatures with special effects, plus they’re able to tap for two different colours. However, unlike Hive of the Eye Tyrant, they always enter the Battlefield tapped and that can be a big drawback in a fast format like Modern.

Although Manlands does not see as much play in today’s Modern scene, it could still see some sporadic use with one copy in the main deck or in the Sideboard. Hive’s unique ability to Exile a card from the Graveyard could disrupt certain decks, but there are also already plenty of other cards that do the same thing without needing to pay Mana and trigger on attack.

How Good is Hive of the Eye Tyrant in Commander?

With Hive of the Eye Tyrant’s colour identity being tied to only black, you’re probably not going to see this in play as much. It could serve as “board wipe” insurance since it only converts to a Creature when you want or need it to, but paying 4 Mana for 3/3 Menace isn’t exactly great value.

Against certain reanimator decks, Hive could see some use as it’s able to Exile a card from an opponent’s Graveyard. The problem here is that it only triggers on an attack, hence you would not be able to respond to an opponent’s Reanimate or similar spells. Compared to other more impactful black-based Land cards such as Cabal Coffers, Urborg, Tomb of Yawgmoth or Volrath’s Stronghold, Hive would be often pegged to less importance.

There really is a lot to be happy about with Hive of the Eye Tyrant, as it’s part of the module Lands cycle that will see the expansion of Manlands into the Standard format. It may not be an all-powerful, win-all card, but it provides superb utility and flexibility and should still at least some play in multiple formats. 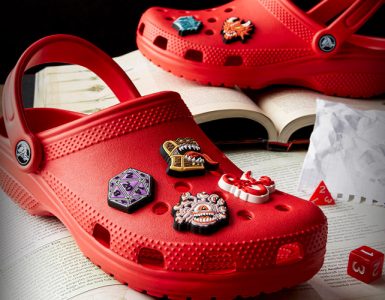 Kill it with Sacred Flame!

These Magic: The Gathering x Arcane cards are must-haves for fans of both!