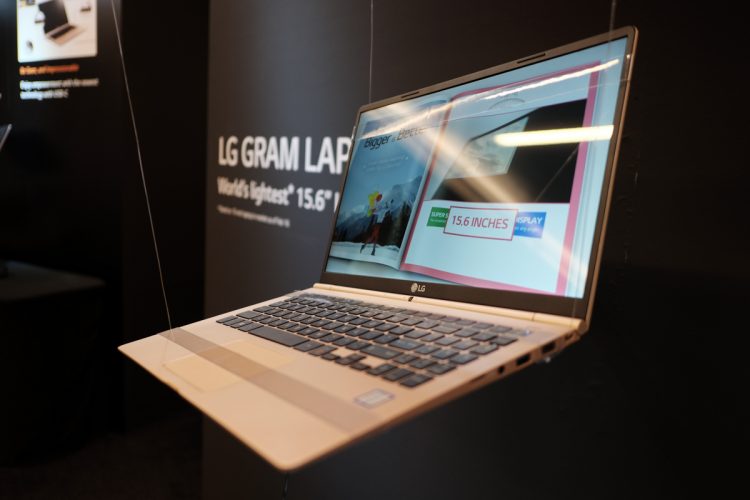 We live in an era of hyperboles but LG’s latest foray into the world of laptops is pretty specific. What we are looking at is a device that stays true to its name, the new LG gram laptop weighs under 1kg and it’s a beauty to behold.

Placing it on the supplied weighing scale, this 15-inch selvete device measured in at 966 grams. While some might be used to lugging around heavier devices, to the working professional you usually carry around more than just the laptop alone. You might lug around a myriad of items in terms of files and other accessories that it all begins to add up along the way. This is really where you start to appreciate the footprint of your devices.

I found out that the only miniscule item was not constrained to the LG gram laptop but also the power brick as well. It’s a far cry from what we’ve come to be familiar with. The power port looks to be the charger that you might have used to charge your discman back in the day.

Being light is no excuse for the lack of ports. This is an issue that is very much common place in this day and age. For any ultraportable, I found that there’s a great need for additional ports considering that you might not always bring it to places that have access to the cloud for your files. Having to share ports with multiple devices is a hassle many folks would live to avoid. With ample USB-C, USB 3.0 and USB 2.0 ports, the LG gram still found space to fit in a HDMI and micro SD slot. Personally, it’s quite amazing to fit that much in so little space.

The only downside I can foresee would be it’s battery life. Compared to the rivals out there, a estimate 7 hour battery life might be an issue for some. However, this is a larger screen we’re talking about as well so some compromises have to be made.

As far as first impressions go, LG might have a hit on their hands but might fight it’s way through a crowded market of similar looking and equally impressive rivals as well.

Below are the full specs and the various models available. LG was even able to squeeze in a numerical keyboard into the 15-inch models.