“Knight Rider – A shadowy flight into the dangerous world of a man who does not exist. Michael Knight, a young loner on a crusade to champion the cause of the innocent, the helpless, the powerless, in a world of criminals who operate above the law.”

It was inevitable, after Playmobil’s rollout of several pop-culture favourites of old over the years, from Back to the Future, to Scooby-Doo, to Ghostbusters, to Star Trek, and even James Bond and the A-Team, it was only about time Michael Knight showed up with K.I.T.T. too.

And indeed, the cult classic ’80s series Knight Rider will be arriving this May. The 53-piece set will come with K.I.T.T. and Michael, Devon and Bonnie figures, retailing at £69.99.

Pressing down on the bonnet of the iconic vehicle will emit original voice clips of K.I.T.T. and operate the red scanner light on the front bumper. The interior dashboard lights up too and the license plate even flips, just like in the TV show! 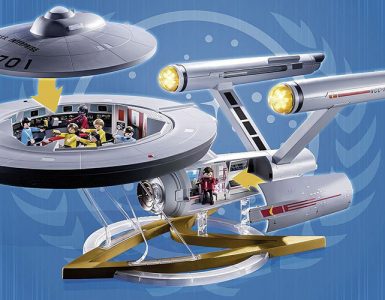 Playmobil will boldly go where no Star Trek toy has gone before!