It’s no secret that Singapore is the secret hidden base for many things Star Wars. It was here that Lucasfilm set up its Southeast Asia office, where Lucasarts had a mini resurgence, and where Dave Filoni kickstarted the early seasons of The Clone Wars animated series.

So it’s no surprise that hidden in the Glasgow School of Art Singapore is a communication design teacher who is, among the local Star Wars community at least, better known for his Star Wars artwork featuring some of the most iconic characters from the franchise.

And with Star Wars Day on May 4th (May the Fourth) fast approaching, what better way to celebrate a nation’s love for a galaxy far far away, than with artist Jon Chan’s upcoming exhibition of his Star Wars art pieces at the ArtScience Museum.

Never strictly copying what he sees, Chan’s Star Wars art teases and questions other possibilities should a character or a scene go differently. His decision to stray off-canon and play with possibilities is to give added punk rock values and tinge of uniqueness to his works.

“I do use references to get accuracy, but I have a rule: Never just copy a thing straight, but change it up and take it out into a different context. That can be done simply by changing the pose of angle or lighting, but never just the image copied. There is very little of the elect of your own interpretation to the character or subject otherwise,” said Chan in an interview with Geek Culture.

Few examples would be what if Din Djarin had Han Solo by his side throughout his adventures in The Mandalorian, or what if Bo-Katan Kyrze, Ahsoka Tano, Boba Fett and Cara Dune and Din Djarin had teamed up all together to fight off Moff Gideon and his crew? In fact, it has become an expectation of the local Singapore Star Wars Facebook group, where Chan would drop new artwork after almost every new episode of The Mandalorian Season 2.

To the untrained eye, Chan’s works look like they’re done on paper, especially with how detailed and textured they look. Each stroke is visible and the colours meld into each other beautifully. Is it paint? Crayon? No, says Chan. Because they’re all done digitally.

Despite having a background in fine art, the artist finds an affinity with digital art “because it helps me get the stuff out as quickly as I need or as slowly as I need,”.

“I happen to have a background in Fine Art, so organic paint like acrylic was my comfort zone. Digital mediums were actually me getting challenged by my dad to try something different. Even now I occasionally do some pencil stuff because to be honest I like the plain-ness of monochrome still.”

And what makes it even more extraordinary is that the 46-year-old is not using the latest iPad or software to create his art. His weapons of choice are what some might consider to be the Millenium Falcon, hunk of junk and all – an old copy of Adobe Photoshop (2015’s CS6 to be exact) and a Wacom Intuos tablet, with what he calls “basic old school gear on a MacBook Pro”.

Each portrait takes a few days to complete, especially since Chan focuses on delivering life-like portraits that tell stories, and isn’t looking at merely recreating a stagnant carbon copy of scenes from the films and series. Of course, this varies from portrait to portrait.

“If I were to actually just want to do a reproduction of something small, it wouldn’t be too long,” shared Chan.

“But the likelihood is that I would experiment with backgrounds because they help to frame the story for the characters.”

“That usually means I will have maybe three failed backgrounds for every successful piece I put up. They could be a case of being either too pedestrian or literal, maybe not dynamic enough. Those would take quite a few days to finish because of my tinkering.”

Prior to making Star Wars portraits, the artist was a freelance illustrator who tackled themes like culture, martial arts and pop-culture. Even then, his works were inspired by other things aside from the subject matter he was bringing to paper, or in this case pixels. Chan takes inspiration from 1960s chanbara (samurai cinema), jigaigeki (Japanese period dramas) and even old monster movies, and adds them into his drawings to convey messages, stories or metaphors on the human condition or social stigma.

Of course, nothing quite owned his heart like Star Wars. Chan was first introduced to Star Wars at a tender age of 5, after The Empire Strikes Back was released. Ever since then, destiny demanded that his love for the franchise would remain all the way till adulthood.

Recalling his first interaction with Star Wars, Chan said: “I was a little too young to understand when A New Hope was released but after Empire, I was hooked and wore out the VHS. From then on, any large cardboard boxes were turned into either the cockpit of the Millenium Falcon, or a SnowSpeeder with the help of magic markers. Empty spaces in textbooks became battlegrounds or the interior of Cloud City.”

And a few years after his introduction to Star Wars, Chan moved from role-playing and started going down his path as an artist.

“Oh pretty much as far as I can tell, from the age of 7. If I could find those old textbooks, you’d probably find a lot of Chewbacca or Stormtroopers in the empty spaces around the pages, I think most kids would be like that,” shared Chan.

Now, decades later, Chan finds himself drawing more and more portraits and sharing them in forums locally and overseas, and on his own Facebook and Instagram accounts. Now that the artist is slowly gaining popularity within the Star Wars community in Singapore, Chan is slowly considering starting up a strictly art account – that is, if he stops procrastinating.

“I have been too lazy to start my own artstation account but I will do that really soon. At this point, if I could do this full-time I totally would, but I’m too busy having fun with the challenge to think too far ahead otherwise,” laughed Chan.

Currently, Chan has a few art pieces in the pipeline. Without giving away too much, the artist revealed that he’s completing a few more Star Wars projects for ArtScience Museum’s May the 4th Be With You Event, and would like to explore other themes that aren’t based on the battle between good and evil in a galaxy far, far away.

“I’m planning to re-enter the martial arts and chanbara themes. I am also planning to explore more regional mythology and characters like (legendary Malay martial artists) Hang Tuah and Hang Jebat at some stage.”

Until then, fans can catch a glimpse of Jon Chan in action, as well as adore the work he’s done on 2 May 2021 at the ArtScience Museum Singapore. More details here. 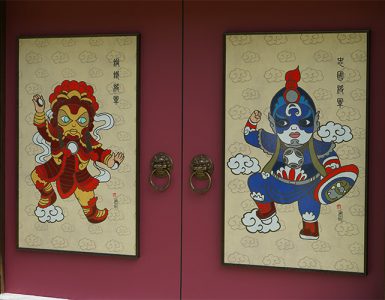