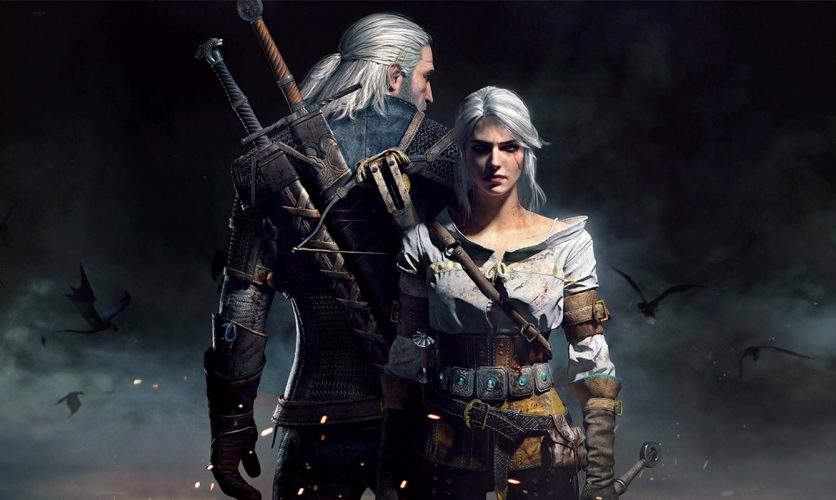 The Witcher 3: Wild Hunt and Game of Thrones both share a common quality that have  made its adult audience love them so much. It is their ability to portray a cruel world, in both shades of black and white, that comes across as deeply disturbing, but yet so beautiful.

It is rare these days to experience a truly mature-themed video game in which you can find elements of love, hate, desire, betrayal and revenge, with a strong foundation in each element. In The Witcher 3: Wild Hunt, those are the basic factors that helped build up the premise of the game.

And these factors have made me recognise it as one of the best adult role-playing game (RPG) games that has ever been released.

You might ask where Dragon Age or Skyrim fits in this scale, but that is like comparing The Lord of the Rings and Game of Thrones – they share genres in common, but both are distinct in their unique way. 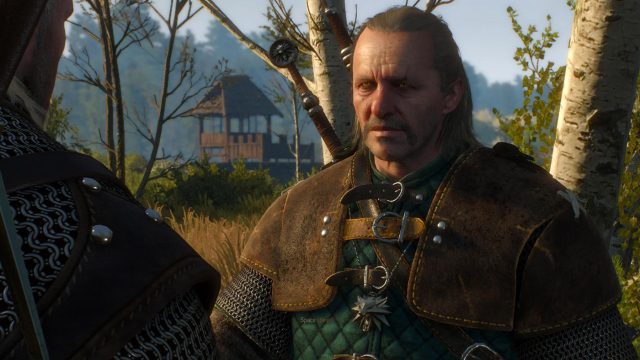 Often, AAA blockbuster titles face a common issue, in that they focus so much on small collective aspects, features and areas, but ignore other core elements of the game. In titles like Alan Wake, the game focuses on storytelling, atmosphere and acting but chooses to simplify gameplay mechanics. In Far Cry 4, the focus is on the gameplay, and there is a complete absence in storytelling.

But not so here, as every feature in the game is well-connected, and balanced in a way such that no single element thrives over others.

During my 20 hours of charting only the main quest, alongside the over 100 hours spent on side quests, treasure hunting and playing the in-game card game of Gwent, I noticed very little shift in the quality and duration of any of them.

All of the side quests and treasure hunts are well designed, with very little of rinse-and-repeat technique that game developers use, to add additional hours of game. On top of that, many side quests are not just an exclamation or question mark on the World Map. Some can be triggered when you walk into an area, read a letter, or it can even be a result of one of many other quests you have completed. Upon completing them, you may even experience visual environment changes in an area, and depending on your actions, these changes may even affect your gameplay.

Those left feeling burned out from the numerous side quests can explore other alternatives, such as Gwent. In simple terms, it is like the blitzball mini-game contained within Final Fantasy X. In gaming terms, think of Gwent as the younger cousin of Hearthstone. 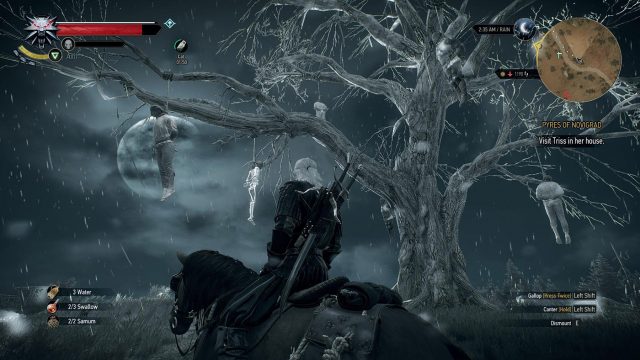 This is not a mere mini-game and playing, as well as mastering Gwent, requires a serious amount of attention and time. Play well enough and you can even compete in a challenging tournament, where an exotic reward awaits.

If Gwent bores you, or proves to be too difficult, why not take a closer look at the game’s looting and crafting system?

One of the reasons why I keep coming back to “farm” those side quests is because completing them often rewards players with incredible loot. These items are not just weapons and armour, but materials which are essential for crafting other items. This is a complex system that will give you an upper hand in combat and in many other situations, should you learn to master it.

Credit should also be given to developer CD Projekt RED, for doing an incredible job with the combat system. Combat here is part finger dexterity, and part recognise the weakness of your enemy. You cannot charge into a battle unprepared, and this game requires you to do some research, by finding and reading books, or even talking to people.

Not every enemy can be dealt with in a same way and knowing what oil to apply on which sword, and when to drink a particular potion, will save players countless of hours and frustrations.

M for Mature is a rating I have seen in many games these days, but I dare say this is because such games contain overwhelming flashes of violence, blood, sex and drugs. These elements are also here, but dismissing these elements as part of some bait would be unfair.

Violence in The Witcher 3: Wild Hunt is so disturbing because the developers have gone for realism. You can see it on the face of a defeated husband who could not save his wife, or hear it in the scream of a mother who lost her child. The worst thing is that you cannot do anything to prevent these events from happening. When you are giving a choice in the game, it is often a choice of picking the bad or the worst. These are choices that some of us have made in real life. 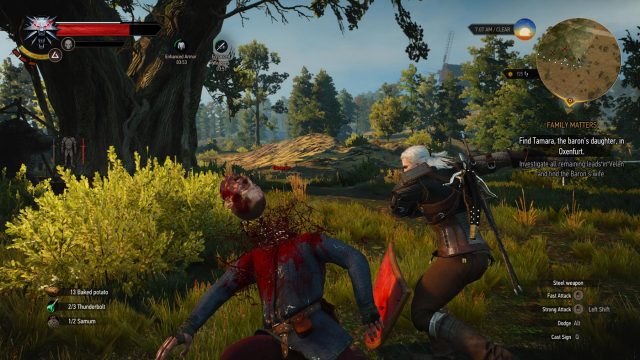 There are also many sex scenes in The Witcher 3: Wild Hunt, but most of them would have been meaningless if not for a budding romance, which the developers have established here. The game’s romance is a constant battle between love and lust, and there are many temptations which players will have to face along the way. You would be surprised by how well the game annoys you by letting you experience the frustration and suspicion of lusting after someone, while making you constantly feel afraid of being betrayed by a love one.

The Witcher series made its name by having many possible outcomes be made available to players, and The Witcher 3: Wild Hunt takes it to a whole new level. Throughout the game, you will have to make a lot of decisions, big and small, and the results of your choices can be felt immediately.

For example, you are being questioned by a group of local warlord guards. If you play your cards right and keep your head cool after many insults, you will have no problem.

However, fighting them means that the guards in the whole province will be after you. Even after you make peace with the warlord, some of the guards will try to kill you. The great thing about these events is that they happen without any warning, and there is no hint what will happen after.This way, the game forces you to constantly think about your actions. 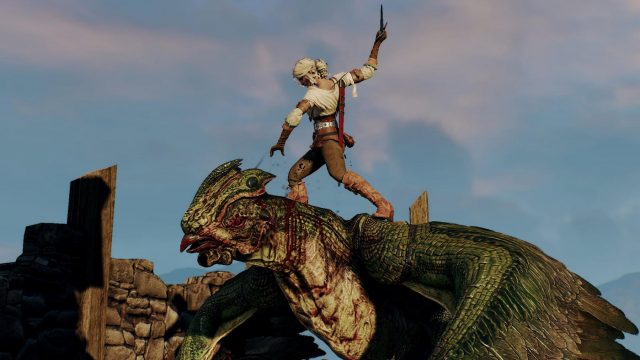 But no game can ever be perfect and players should expect a number of bugs and glitches. However, a few of them are worth mentioning because they often appear, and can disturb your immersive experience.

Your horse, Roach, can appear from out of nowhere after you summon him, and this includes reappearing inside someone else’s house. This bug is very annoying when you are inside a village or city. There is also the occasional glitch in the game’s ragdoll system, which happens often at some boss events.

Early players will also face some Day 1 performance issues. Even after four patches, the developer has been unable to get the game to work properly with Nvidia’s new hair technology. Turn this mode off completely, and you can increase game performance by 30%! 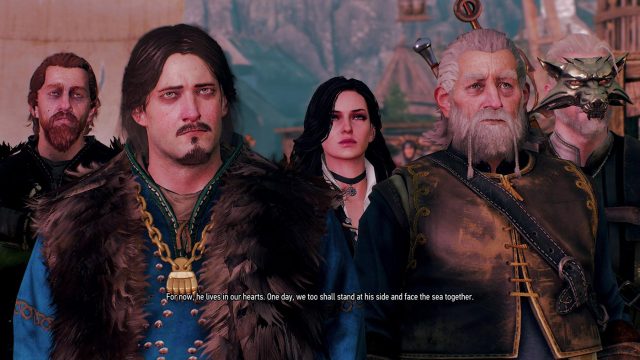 After nearly 100 hours of riding, exploring, crafting, fighting and romance, I would say The Witcher 3: Wild Hunt is a strong contender for 2015’s Game of the Year.

Trung comes from a country where video games are a form of deviant entertainment. Despite being condemned by the society, his passion for video games grows stronger every day. That is one of the reasons why he becomes a writer, to tell how awesome video games are, to convince the society he lives in.