What is it with boxing films and the actors involved method acting as athletes, either rising to the top from the bottom, or going from fame to infamy, or climbing out of despair and tasting the bittersweet flavor of humility? The formula isn’t new, and audiences has seen the likes of Sylvester Stallone, Robert DeNiro and Russell Crowe enter the ring. One reason is because these genre of films help elevate the main actor to superstar status and into a pop culture icon.

Unless you end up doing way too many sequels.

You can now add Jake Gyllenhaal to the list, which is already a prestigious one at that. He’s the main star of Southpaw, a boxing movie where the highlight is having the main actor pull off realistic Rocky/Lamotta/J.-Braddock archetypes. And this is something Gyllenhal excels at, thankfully, as it is the only thing anchoring this film, and weighing it down from going off the rails with its cliched story beats. 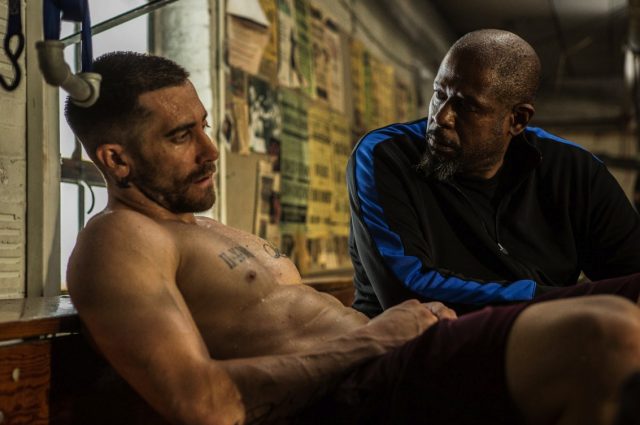 In A Burning Heart Just About To Burst

Gyllenhaal’s Billy Hope has it all: a peaking boxing career, a lovely & supporting wife (played by Rachel McAdams), a precocious kid, and the usual fame & fortune package that goes with champions of gloved pugilism these days. Of course, he has to continually get punched in the face, a lot, just to get a winning streak going, so naturally sane people, like his wife, tells him to retire.

Before he can make a choice, tragedy strikes and Billy ends up wallowing in his grief. He messes up a lucrative career changing deal and loses everything due to the changing circumstances of his poor life. Even his trusted manager Jordan Mains, played by the newly bankrupt 50 Cent, decides to go for a bigger better deal with rival boxer Miguel Escobar, who so happens to have quite a bit to do with the aforementioned tragedy.

So what can he do next? Why, simply seek out a fatherly figure to turn this obvious film around. I mean, turn this into a case for redemption. In comes Forest Whitaker, who plays Titus “Tick” Wills, a former boxer-turned-coach who help kids from the slums be better people, through the bloody art of boxing. 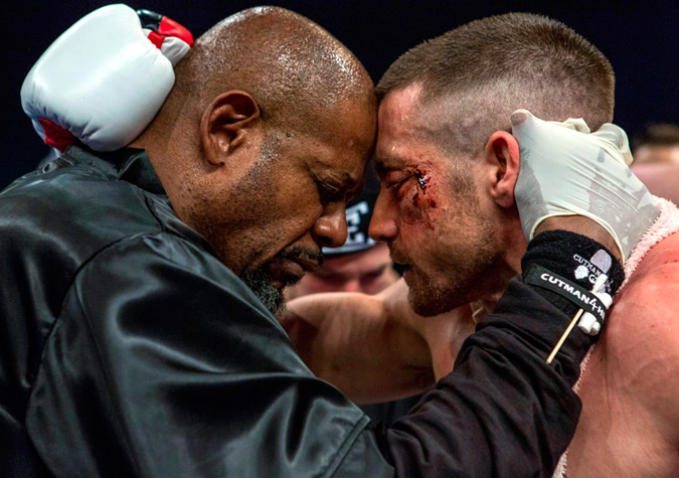 This means that we see Gyllenhaal emote and power through the film, under the hard-nosed mentorship of Whitaker. In the dead of night and at the dingiest of locales, and at about the 2/3rds bit of the film, we see why both actors deserve their hard earned stripes from previous dramatic gigs.

Gyllenhaal’s journey to despair and then hope is interesting and awe-inspiring, while Whitaker’s eager sageness demands your respect.

This is coupled by the melodrama and internalized struggle, presented by writer Kurt Sutter, and directed by Antoine “I made Training Days” Fuqua. They elevate what is essentially a typical boxing film with their skills, and turns a rivalry between Gyllenhaal’s Hope and Miguel Escobar into a spectacle.

This isn’t the most original piece of work in cinematic history. Heck, you can count and predict all the basic story beats from just the first 30 minutes of the film. Its only saving grace, the bit that justifies the price of admission, is the headline boxer-and-mentor one-two punch performances of Gyllenhaal and Whitaker. 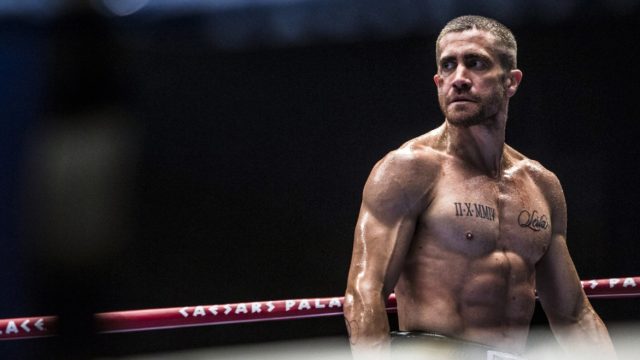 Come for the star power, stay for the obligatory-but-well-meaning acting from Gyllenhaal and Whitaker.