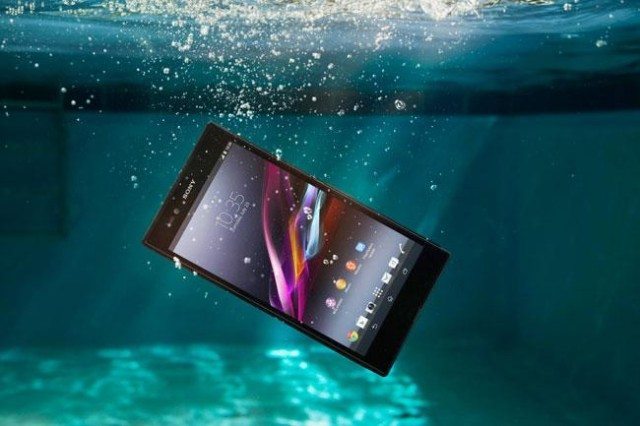 If I received a dollar for each remark that mentions how huge my phone was I would probably be able to buy the Sony Xperia Z Ultra ten times over. I may exaggerate but the response with regards to this phone is nothing short of amazing.

The Sony Xperia Z Ultra is possibly the best Android phone out there in the market right now of its screen weight class.

“OMG look at the size of that phone!”

Pitting the Sony Xperia Z Ultra against the puny iPhone is a no contest.

The phone is rather wide and two handed operation is mandatory especially when texting.

Knowing that the overall width of the Ultra Z might be a strain in the pocket, Sony has been able to design the phone slim enough to complement its screen size. Any more thicker and its usability would suffer.

While the image above is rather tough to make out the slimness of the Z Ultra, the Note 3 user which I had passed the Z Ultra to remarked that the phone felt much better in his hands compared to his own device.

Adaptable to all your lifestyle needs

The niftiest feature that the Sony Xperia Z Ultra would be its waterproofing. I kid you not. Underwater photography and video functions perfectly while dunked in water. This is one phone that will survive a plunge into the toilet bowl if its huge size does not save it first.

Battery life for this phone is a huge plus point as well, the Z Ultra lasts an entire day in normal circumstances. While a typical day differs from individual to individual, it would be safe to assume that the phone could easily squeeze out a day of functionality for the hardcore data and video streamer. But like most phones these days, always ask the user how is his phone’s battery life six months into use to obtain the full picture. Daily, I was able to squeeze out a good 23 hours of battery life once the phone is unplugged at 100%.

Plenty of thought was put into Sony’s design for Android phone on the software end. Despite the number of prebuilt apps that Sony had included into the phone, it does not feel as intrusive compared to a Samsung. The phone’s stock experience is fast and has useful tutorials to ease users into their new device. Being able to turn on wifi automatically in a known wifi spot is always a welcome default feature. A very nice feature to have but not always apparent to the average consumer to help them save battery life. Sony goes a step ahead and eases it into your everyday routine.

Bigger is not always better

With a phone of this size, it would be an easy sell to the ladies. But one had remarked that the screen size would easily smudge her makeup. This was a point that would have totally escaped me. Angling the phone so as to prevent the screen from coming in contact with the cheek is impractical due to the size of the screen.

In order to pack everything in, Sony had decided to sacrifice camera quality and a in built LED to function as a flash into the phone. It might not be a deal breaker for some, this was a surprise to me considering that Sony’s focus on phone camera quality has always been a priority.

Lugging a phone this big can be quite irritating at times. It does not help that the vibration of the phone is rather weak as well. I’ve missed many a phone call after placing the Z Ultra into my bag much to the annoyance of the caller.

“With a phone that is so big, I’m surprised you missed my call.” – Boss to me.

With many phone models going the way of the phablet why not pick the one that is top of its game at the moment? The size of the Sony Xperia Z Ultra is both a strength and weakness.  But this is a solid offering from Sony that is bold enough to test the market for phone of its size. If you are the type that loves to consume content while on the go, please get this phone and you would adore it to bits.