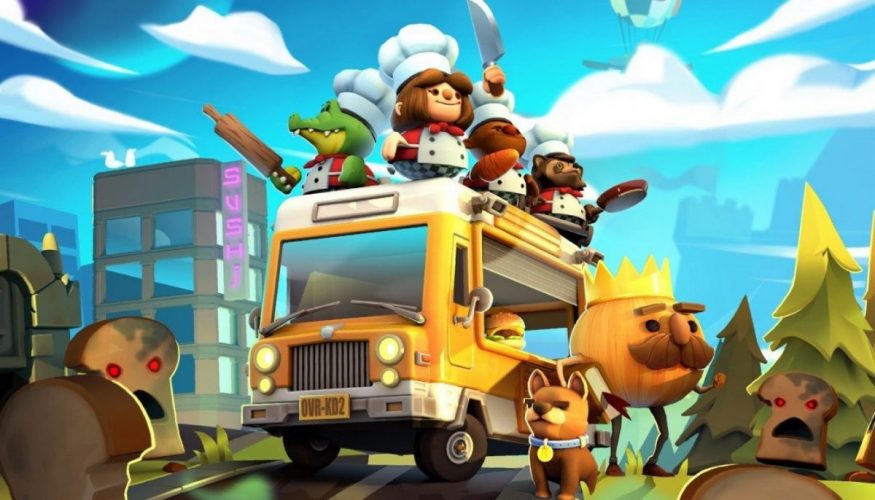 Screaming in frustration. Prioritisation. Getting into everyone’s way.

If Overcooked 2 does not replicate the potential chaos in the kitchen, no game ever will.

With the release of Overcooked 2, the first title has transitioned to be very much like a welcome appetiser. If you’d made it through the original with your relationship with friends and significant other intact, the sequel has done well to improve on the original and serve up a pretty plated package.

Overcooked 2 is a game where too many cooks can indeed spoil the broth. At two player count, meal service is can be pulled off with relative ease. Relative to a full party of four is where the real chaos starts. 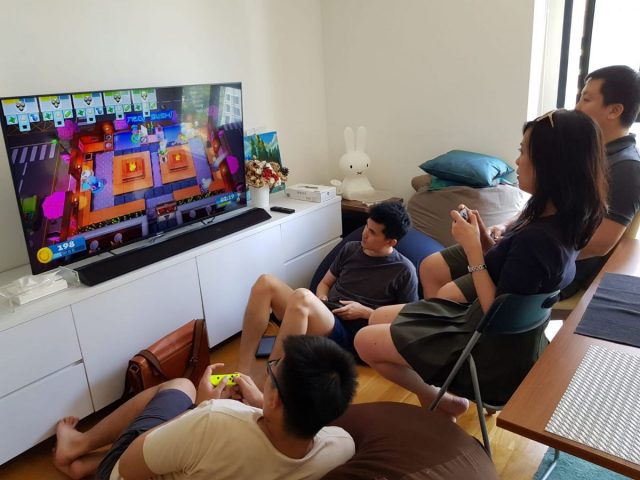 The natural choice for Overcooked 2 has to be on the Nintendo Switch, as all you need is to pass everyone a single joycon and you’re good to go. However, gaming on the minute screen will be a big challenge, especially if you have you’re planning to max out the number of players to 4 folks. The prospect of huddling around the screen while trying to make out all of the chaos on screen is an added challenge. While the option does present itself, the party will be better off screaming at each other while playing on the big screen. 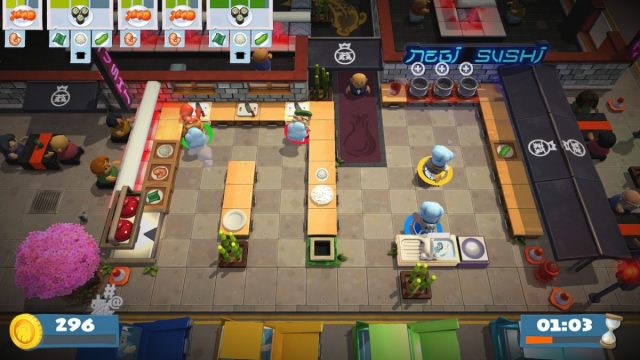 Similar to the first Overcooked, the sequel still does not hold your hand through from the beginning. While it might be still daunting for some, the difficulty curve projects itself with a much gentler gradient, and the dishes which you start cooking with (Sashimi and Sushi) are way more inspired and representative of the actual dishes. Compared to the original where one would have to chop 3 onions and serve them into a giant pot, Japanese cuisine is definitely more palatable. All one would need to do is slice up the fish, serve on a plate, and you’re done!

As far as easy starts go, Overcooked 2 is more than happy to ramp up the difficulty and fast. 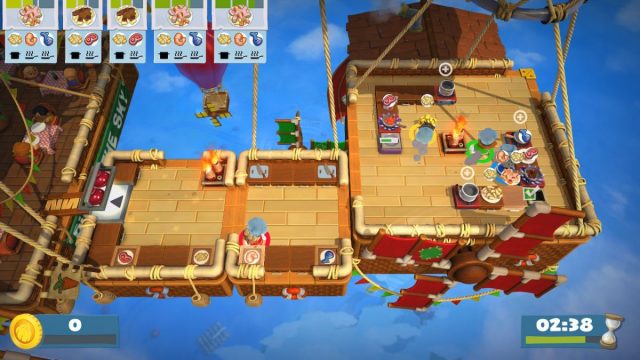 All the creative environmental hazards and moving levels which were hallmarks from the first are back once again. This time around, it feels much better as the difficulty scales well if you’re playing with any number of players. Solo gameplay, however, is still out of the question. While some stages might feel confusing and downright challenging at times, all it takes is a few runs per level to get a good idea of each level’s mechanics, in order to score a full three stars with each recipe.

Having played with a few sessions with friends across varying skill levels, passing a stage has become much easier compared to the first, but getting top marks still remains a real challenge. To help aid this, aspiring chefs now have the ability to throw ingredients to each other which is essential in tackling some of the more challenging stages. No longer would one have to traverse across the map to drop off ingredients, when a well-placed toss could even send rice straight into the cooker. 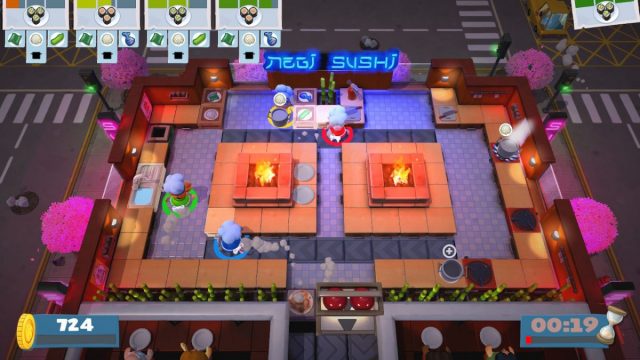 With new techniques and stages in play, Overcooked 2 offers up newer recipes to wreak havoc in the kitchen. While the tools you’re used to are no different from the first, the flow of how orders are put together feels more fluid and less frustrating for newer players to understand how each order is made.

With the ante upped, one issue does linger regarding how developers had to tweak and get the controls just right. While the sequel has done much to improve on the controls and precision from the first, Overcooked 2 does not seem to play well with the joycons with frequent disconnects a common occurrence, which can kill much of the momentum in-game.

It’s not a deal breaker, but one should note that gameplay on a Switch Pro controller is a vast improvement over the joycons.

Stepping up from the original is the inclusion of online gameplay, with the ability to connect with random folks around the world. In theory, it sounds great and all but with the lack of proper voice communication, Overcooked 2 becomes an even greater exercise of patience. If playing with friends in real life is already challenging enough, the rather robust emote system is handy but rendered useless when chefs tend to develop tunnel vision, as they go about their duties.

It’s a welcome feature that brings much-needed value to the game but it’ll be better to play the game with a bunch of friends over voice chat in the mix. At the present moment, cross-platform is not available but the developers have not ruled out its inclusion down the road.

While Overcooked 2 does not have many core upgrades from the original title released back in 2016, the overall feel of the title is much tighter right now, control and game progression wise. If you’re looking to get into the game with a brand new set of friends for each session, go for the more forgiving story mode as opposed to arcade mode. Overcooked 2 should be the go-to party title for any Switch owner in their library.