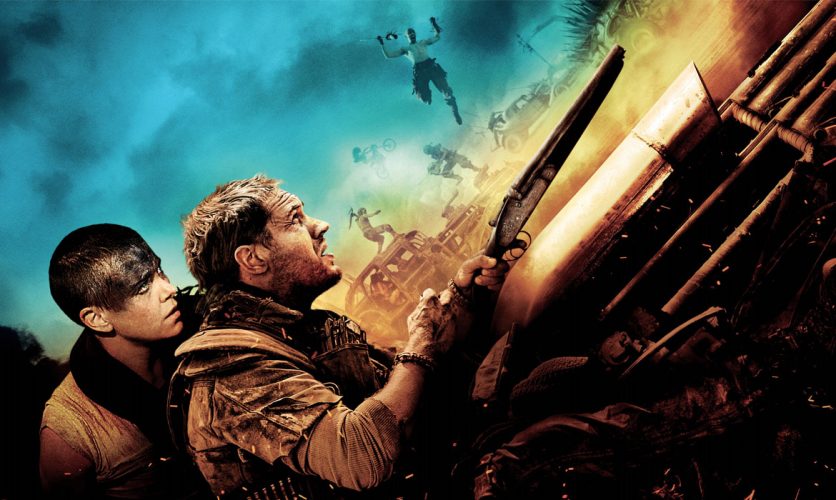 Oh, hello. The Internet is already frothing with reviews of Mad Max: Fury Road. Most are gushingly, ridiculously positive. Some are pure for-the-sake-of-it negative. Others go meta, and make snide remarks about how men’s rights movements have gotten their panties in a twist.

So here’s some background for those who have not enjoyed the first three movies. What? First three? Yes, this is definitely a sequel. There’s another George who made us wait twenty-plus years for a new movie in his franchise. This one, George Miller, had us wait for thirty, and the last one was a G-rated spiel with a bunch of leaf-wearing children, Tina Turner, and pig shit. This movie here, is no reboot. It is the fourth movie of the Max Mad series, and the flashbacks and references confirm it. If you are already familiar, well, SPOILER ALERT but this time, “Home” is not what Max told the tribe of lost airliner kids and you can see the sadness in Max’s eyes when the Pursuit Special gets destroyed. Aww. Other than that, you can stop reading now. This movie is basically the chase sequence of Mad Max 2: The Road Warrior, expanded, lovingly crafted with practical effects, and carrying a whole new plot.

By way of history, Max Rockatansky (Tom Hardy) used to be a traffic cop in the post-apocalyptic Australian Main Force Patrol, but goons killed his kid and maimed his wife, so the last one third of the first movie was his revenge adventure. The next two movies shows him getting dragged into other people’s problems, and that’s exactly what happens here too. Why does this movie not fit the traditional Hollywood arc, where the hero reaps a permanent closure and massive bonus drops after the boss-level conquest? Because this is Mad Max. He gets shot up and bloodied early on, gets help from the weak or otherwise-unlikely, stumbles onto his mad maxing, and moves on. Others benefit, but he just stoically and heroically disappears back into the sands of the Outback, like some song by Kansas. Even in this movie, he still wears his leg brace from realtime years ago. He still has bad luck with dud shotgun shells. But by this time, we are entering the realm of legend. Little wonder he doesn’t need to resemble Mel Gibson – looks don’t matter anymore when the entire narrative could well be an in-universe myth, scraps of Word Burger from the History Men warbling in the bombed out ruins of Woolloomooloo. Yay for Tom Hardy. 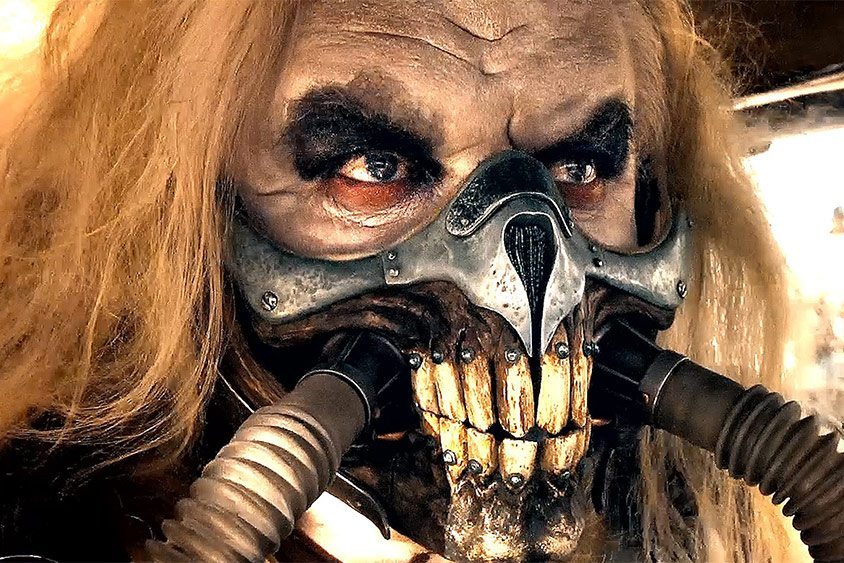 In this particular instalment, we have this weird kingdom called Wasteland run by King Immortan Joe (Hugh Keays-Byrne, most recently credited in IMDB as “Man 3 from Sleeping Beauty” … but scroll further down for another gem in 1979). This big bad looks like the bastard grandchild of Darth Vader, Skeletor, Beetlejuice and Gene Simmons. There is a bunch of clutish mutant “half-life” War Boys coated in white bodypaint and occasional panda eye makeup, like Ju-On. These exist only to serve in combat and they wish to die in Valhalla. But there are more normal-looking people, from the stinking hoards of the Wretched to Joe’s better-fed bronze-skinned staffers. Joe also hoards subterranean water in his own Garden of Eden and keeps a harem, five of whom are up the duff, yet on the run, with the help of a senior officer, one of many “Imperators”. Only this one is a woman called Furiosa (Charlize Theron), and she has a ghetto prosthetic left arm, a past, and an agenda. How Max ends up throwing his lot with them, is a very, very short story done away with right at the beginning of the film. The rest of it is about his journey with the ladies as they pick up a stray gearhead War Boy called Nux (Nicholas Hoult), head east on bone-jarring jalopy hijinks towards a green land, one briefly-naked Valkyrie (Megan Gale looking like a hotter, beefier Maggie Q) and a bunch of old crones calling themselves the Vulv- … I mean, Vuvalini. And they’re all hurtling towards a Maxmadness-induced plot twist.

The bulk of the movie is action, action, action. The familiar vehicular spikes and flamethrowers are there. The incongruous burning of precious fuel chasing after other vehicles for their fuel is another, but played better this time. The multi-vehicle pile-ups that somehow fail to approach Blues Brothers levels, are there too. Spears from previous movies now come tipped with napalm heads. Plot-changing crowd chants, deformed people, wrist-mounted crossbows, oversize bodybuilders, all continue making their appearance.

But some things are different. The fabulous names like “Prince Rictus Erectus” (wrestler Nathan Jones) are still around, but they aren’t obvious anymore. Certainly not as pronounced as Lord Humungus’ Ayatollah of Rock ‘n’ Rollah. The cinematography and prop design are also smoother this time, more smoothed-out with dithering, more “chrome”, and with more CGI and frame-rate tricks here and there. Generally, they do not detract from the aesthetic of the movie, which is fairly consistent with its predecessors. The one exception is that the producers seem to be trying quite hard to make our new Max seem crazier and more frenetic than Mel Gibson.

Of course, there are some awkward moments and weak points. And, of course, these are irrelevant. Way back when the first Mortal Kombat movie came out, some critics panned it for lacking plot development. They were missing the point. So we won’t commit that mistake here. Underdeveloped characters abound, surely. But they aren’t important. See that eyeless creature rocking a flamethrower/electric guitar before a wall of speakers? That’s iOTA, an Aussie rocker. He’s one of the most colourful characters, but who cares? It’s not like he’s playing like Rodrigo y Gabriela. Nux, who occupies a great deal of screen time and might even have a budding romance with the redhead harem escapee? Not particularly stand-out (even though this is the new Hank/Beast from X-Men, mind you). But nevermind all these. This is an action movie.

You left your brains at the door, stop hankering for them now. 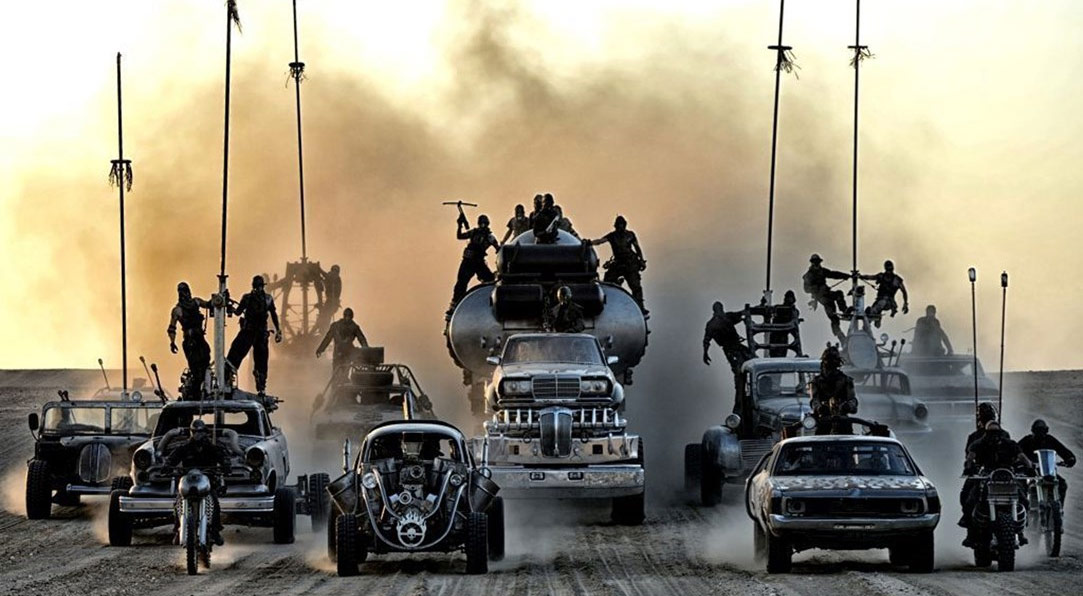 Game over, man. There is no point watching any other action movie for the next seven months. That’s it. The rest of the review is self-gratificatory fluff.