Sometimes all you need in a film are a bunch of circumstances that lead to three friends who haven’t seen each other in a while to reconnect and even sort out past grievances. Look it sounds like real life, but if you have a tight script and a cast to pull it off, that already is entertainment enough.

In 2003, former Navy corpsman Doc (Steve Carell) meets up with his old army pals Sal (Bryan Cranston) and Reverend Richard Mueller (Laurence Fishburne), and asks them to tag along to help bury his son who was killed in the Iraq War. 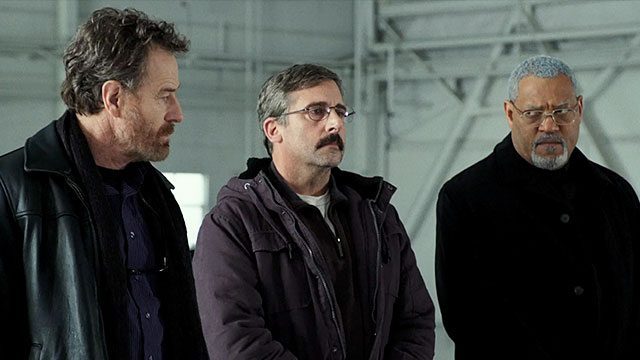 As they drive together and reconnect, they end up with their own revelations and get some closure over the things they’ve done during their service in the Vietnam War 30 years ago.

Last Flag Flying does a good job of doing the road trip styled narrative, while putting in its own commentary on how America treats its veterans, the thin line of patriotism, and how sometimes finding out a truth in war is worse than not knowing at all.

Keep in mind that this is directed & written by Richard Linklater, the guy who gave us Boyhood, Waking Life, and Everybody Wants Some!!, so there’s a ton of humanistic overtones with this film – it’s grounded and doesn’t’ feel staged, with every plot point flowing naturally. It helps that the movie has three veteran actors to work with. 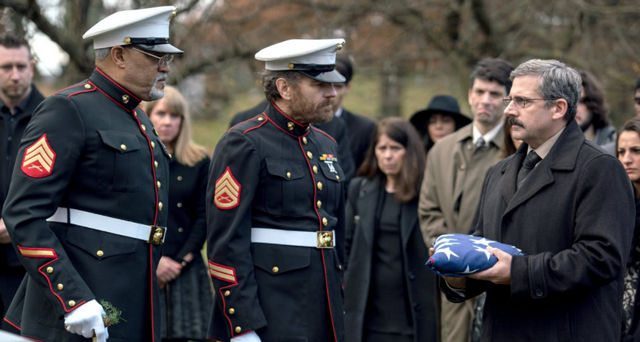 Carell’s grieving father role is the one which resonates with viewers – he’s purposely wispy and is a shell of a happier person back in the day. You can tell from his eyes and his mannerisms. Cranston’s Sal is the showiest, and is a man stuck in the past; he always talks about the good old days of the war he was in and just brings both Carell and Fishburne’s characters out of their comfort zone. Fishburne’s pastor role balances his changed ways and some of his salty language creaking through, to show that you can’t really leave the past behind.

All three of them work well together, and you buy into the fact that they are, and still will be, a trio of buddies who will stick through the end of the film.

You Know Where This Is Heading…

Thankfully the three steal the show because the rest of the script and writing is way too hackneyed and predictable for its own good. It has the best of intentions, but with a lot of callbacks to Operation Red Dawn and its by-the-numbers approach, you can’t help but wonder if we’re even given much room for interpretation from Linklater’s message. 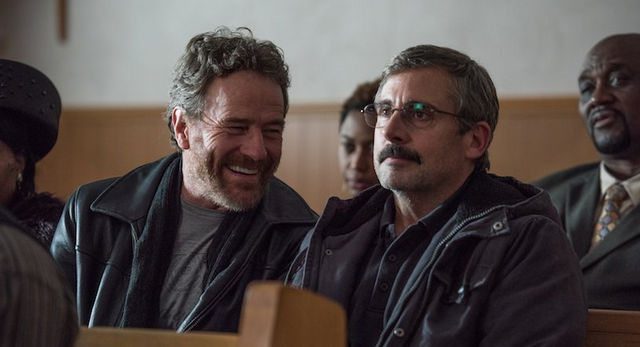 We know that Mueller will show his old stripes yet again, Carell’s Doc will get closure, and Sal will still be the same as he was before. Last Flag Flying will unfold as expected with its commentary on patriotism and loss, so don’t expect the film to challenge you with its message. But at least stay for the camaraderie.

Last Flag Flying isn’t going to turn heads with its commentary on the status on post-war veterancy, but the ensemble piece shines thanks to its leads.