When Avengers: Endgame took the international box office by storm, the highly-anticipated movie unsurprisingly rose to the top of the earnings table in almost every country – except Japan, that is. While the rest of the world was getting their much-needed superhero fix at the cinema, the Japanese audience sought entertainment through different means, turning their attention to the likes of Detective Conan instead, which saw its 23rd movie dethroning the Marvel juggernaut at local theatres.

Titled Detective Conan: The Fist of Blue Sapphire, it raked in a total opening weekend gross of 1.88 billion yen (US$17 million), and at one point, momentarily lost its top spot to Endgame. Alas, the domination of superheroes was not to be, as the sleuthing film regained its lead in the fourth week, and even managed to beat out Detective Pikachu along the way.

Sure, the Japanese market has always had a different track record with Marvel titles compared to other parts of the world, but there’s undeniably something significant about an animated movie reigning supremacy over a heavy hitter. As it is, The Fist of Blue Sapphire is one gem (get it?) of a Detective Conan film, delivering on all fronts – especially where the series’ signature elements are concerned – and with few flaws to boot.

What makes it stand out from all the previous iterations is the introduction of a foreign setting. Where the past 22 movies were set in home country Japan, the newest member of the lineup features Singapore as the main backdrop – a first in the history of Detective Conan movies. This time, titular character Conan (Minami Takayama) is set to travel overseas to the small, humble island, where he and Kaito Kid (Kappei Yamaguchi) become embroiled in a murder conspiracy in Marina Bay Sands (MBS) due to the presence of the mysterious Blue Sapphire.

Right off the bat, the startling detail put into the visuals is very evident, and credit has to be given to the team. The likes of MBS, and by extension, every other Singapore attraction, are expertly replicated in the movie, sporting an extremely true-to-life resemblance to their original counterparts – from the hawker stalls in Maxwell Food Centre to the surroundings of Merlion Park. As dusk sets in, the night skyline of MBS cuts a beautiful image, alongside the lit-up structure of the Super Trees.

When the action kicks in, the animation is slick and fluid, especially during Kaito Kid’s stealth and heist scenes. With many escape tools at his disposal, he is often seen fleeing from the scene of the crime; this thrill of the chase is well conveyed, as the camera pans from close-up frames to wide shots that capture the chaos perfectly. The segue between these high-octane sequences and slower, peaceful moments is smooth as well, allowing for a clear understanding of pacing changes.

Very seldom, however, there will be minor inconsistencies in the animation, such as slightly altered physical features, or awkward, jerky motions, though they can easily go unnoticed due to the rare frequency in which they occur.

The addition of Kid to the movie is a much welcomed one, considering his absence in the previous instalment, Detective Conan: Zero the Enforcer. It sets up the stage for the development of his dynamics with Conan – the duo share a frenemy-driven relationship – and it’s certainly fun to watch their contrasting working styles coming together. The odd pair’s banter, in particular, makes for some entertaining material.

Accompanying the two not-friends are familiar faces from the original series, alongside a healthy mix of new characters. The likes of Conan’s childhood friend and romantic interest Ran Mori (Wakana Yamazaki), the latter’s best friend Sonoko Suzuki (Naoko Matsui), and her dating partner Makoto Kyogoku (Nobuyuki Hiyama) have all returned to the fray, with each having their own defining moment in the movie. More importantly, the team has shelved some room to test the bond between Suzuki and Kyogoku amidst the overarching conspiracy plot, which saw the characters grow into themselves – more so the latter than the former.

And while the move to not sideline the supporting cast is an admirable one, the friction encountered by the duo over the course of the movie does seem a little overdone, especially since it could have been easily avoided with better communication. Fortunately, their relationship struggles did not take up too much screen time, and the resulting self-discovery process was handled rather adeptly by the Detective Conan committee.

On the note of new characters, the lineup has been specially tailored to fit into Singapore’s multiracial landscape. Aside from attaching common Singaporean surnames to English names such as Sherilyn Tan (Yu Asakawa), selected characters are also assigned names across various races to reflect the nation’s identity as a melting pot of cultures, including Rishi Ramanathan (Yuki Kaji), Zhonghan Chen (Jeff Manning), and Hezli Jamaluddin (Ryan Drees). It’s a nifty, little addition that comes across as thoughtfully conveyed, and the effort is greatly appreciated.

Story-wise, The Fist of Blue Sapphire boasts a fairly straightforward, uncomplicated plot, though its theme of piracy strays off the conventional path of Detective Conan titles. With a sub-two hour running time, there are times where the plot seems to be progressing too smoothly or overly-fast, especially since there’s a fair bit of intrigue to unpack. There’s, thus, hardly any sense of suspense, but that’s fine – the magic of Detective Conan has always been in seeing Conan’s investigative prowess in action, and there’s plenty of that to go around in the movie. The clever use of a red herring and carefully-planted cues is also instrumental in the successful delivery of a satisfying end.

Perhaps the best part of it all is that The Fist of Blue Sapphire is extremely viewer-friendly. Where one might expect the audience to have a modicum of knowledge about Detective Conan, the film is equally capable of charming first-timers and newcomers, and in fact, has a dedicated, impressively-adorned opening scene to give a quick low-down of the series’ writing.

As it stands, Detective Conan: The Fist of Blue Sapphire is one enjoyable, exciting affair that not only appeals to long-time enthusiasts, but is also more than capable of impressing first-time viewers. It has definitely surpassed expectations in more ways than one, bringing to the table remarkable visuals, slick animation, a commendable effort in portraying Singapore in a positive, accurate light, and great, great fun.

There is only one truth, and the truth is that Detective Conan: The Fist of Blue Sapphire has certainly delivered on all fronts. A delight for old-time fans and great fun for casual viewers and first-timers, this gem of a movie is worth keeping an eye out for – the fact that Singapore is so beautifully recreated here only serves to increase its appeal factor. 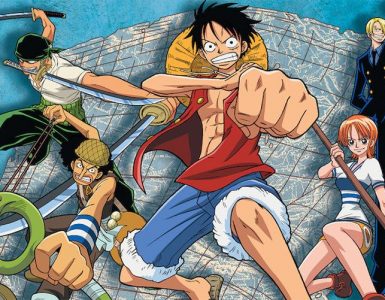