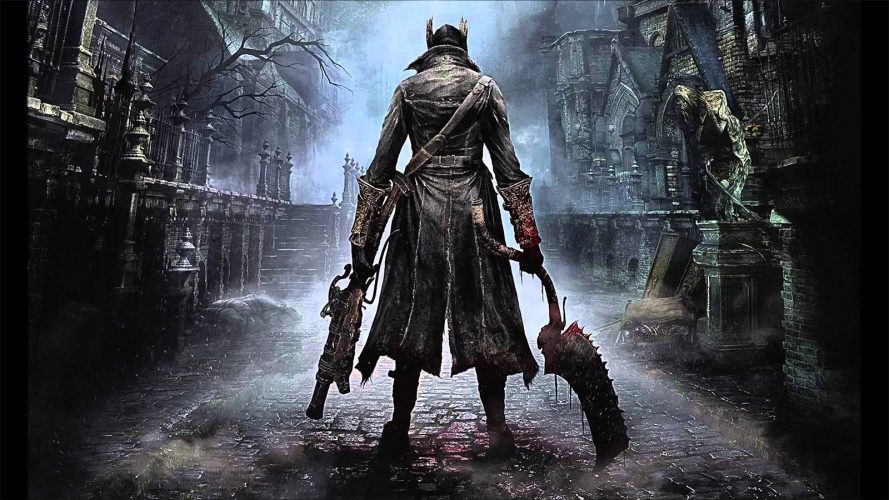 You’ll either love or hate Bloodborne, at first.

And then the game sinks its bloody hooks into you, and you’ll either love it even more, or start hate-playing the damned thing.

Prepare To Die… Yet Again

Bloodborne is FROM Software’s spiritual successor to the wildly successful Souls series of games. I say “wildly successful” in relative terms; no other AAA franchise has defied modern video game conventions so much, and yet received the sort of critical acclaim that it has.

In the same vein, Bloodborne eschews mass-market appeal once again – with it’s punishing difficulty, obtuse game mechanics, and a story that plays hard-to-get, it is certainly not a game for everyone. “Hardcore” does not even begin to describe it – this is some serious stuff.

It takes a certain kind of gamer to enjoy something like Bloodborne – the kind that is willing to take risks and go off the beaten path, to learn and adapt in the face of countless failures (and deaths), and ultimately relish the satisfaction they would feel upon the defeat of a foe previously thought to be insurmountable.

If you’re that kind of gamer, you’re going to love Bloodborne. But be warned, the feeling is most definitely not mutual. 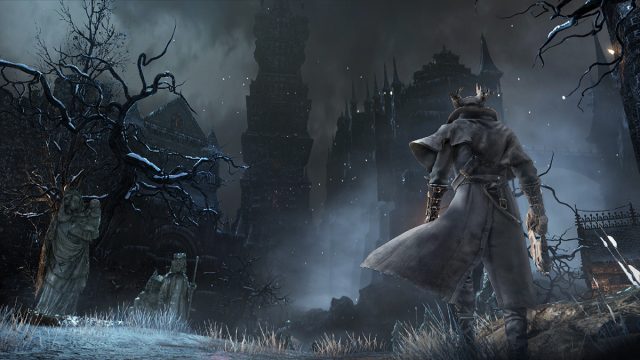 While Souls veterans will feel right at home in Bloodborne, FROM Software has made some significant tweaks to the gameplay to keep things fresh. If I had to summarize the changes in one sentence, it would be this: The pace of the game has been slowed down in some areas, and sped up in others.

But you didn’t come here to read a summary, so let’s go into a little bit of detail.

For starters, the absence of heavy armor and a traditional blocking mechanic means that players are no longer able to be as cautious as they once were. Gone are the days of slowly creeping through dungeons while hiding behind the relative safety of a shield – evasion is now the name of the game in Bloodborne, and players will have their dodging skills thoroughly tested during the course of the game.

This serves to highlight the sense of tension much more than in previous titles, and rewards good timing and quick reflexes. Rolling right under an enemy attack and delivering a flanking retaliatory strike has never felt better.

To balance things out, stamina costs for evading have been greatly reduced, allowing for more leeway when it comes to getting out of the way of an incoming attack. Characters (known as Hunters) are hence a lot more nimble on their feet as compared to previous Souls titles, and this is something that players will want to take full advantage of in order to stay alive.

This is especially apparent the first time you take on a rival Hunter – it was quite the eye-opening experience that completely changed the way I played the game henceforth.

The game rewards aggressive play, and this is best demonstrated with the introduction of the “Regain” system. Upon taking damage from an enemy, the Hunter will have a small window of opportunity to strike back and regain some, or even all of the lost health. Sounds good, doesn’t it?

Yet, it is not as exploitable as it seems: Do I counter-attack right away, and risk taking even more damage? Or should I play it safe and forgo the health, and wait for another opening? It can be a tough decision to make in the heat of combat, and having to consider this while engaging multiple foes will elevate the tension even further.

So how is the game slowed down? I’ve noticed that enemies, bosses in particular, seem to have a lot more health than before. I get the impression that this was to balance out the fact that the Hunter can carry up to 20 healing Blood Vials right from the start of the game, giving players more health to fall back on should the need arise.

Fights can now go back and forth for much longer than in previous games, but this is a good thing – all bosses now have alternate forms that trigger when they hit a certain health threshold, which can change up their attack patterns (and in some cases, appearance) drastically. 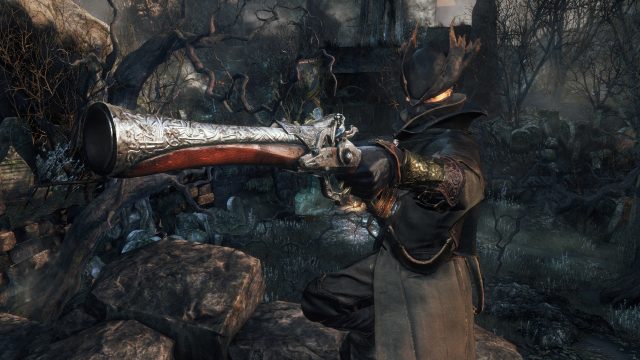 Trick Weapons are now the main focus of the Hunter’s arsenal in Bloodborne. They are basically an amalgamation of 2 classic weapon archetypes, that can be transformed on the fly – even mid-combo. This can lead to some Devil May Cry-esque moments where your Hunter throws out a flurry of attacks while seemingly switching weapons. Over the top? Probably, but also undeniably awesome.

It also essentially makes 4 weapons available at your Hunter’s fingertips at any time, assuming both primary weapon slots are taken up. Given that certain weapons will be better for specific situations, this opens up more tactical options for the smart player and is a welcome addition.

Archaic firearms like flintlock pistols now take the place of a shield in the Hunter’s off-hand. While some might decry the addition of guns into a Souls game, it actually fits the Victorian setting of Bloodborne perfectly. Aside from a couple of late-game examples, firearms are not as powerful as one might think – you’re not gonna be nailing any instant-kill headshots in this game, that’s for sure.

Rather, guns are used to complement the player in close combat. Shots can be used to stun most enemies and interrupt their attacks, and a perfectly-timed close-ranged discharge can bring an opponent to it’s knees, allowing for a devastating Visceral Attack, one of my favourite new additions to this game.

This feels like a natural evolution of the parry/riposte system from previous Souls games, and I’m sure many keen-eyed players out there will be making full use of this ability.

The infamous backstab also makes a return, but FROM Software have changed how it works, possibly due to fan outcry regarding “lag backstabs” in previous games. I initially felt that the new system was cumbersome, but I have come to appreciate the rationale behind (heh) it – backstabs should be attacks of opportunity and not a primary means of dealing damage. 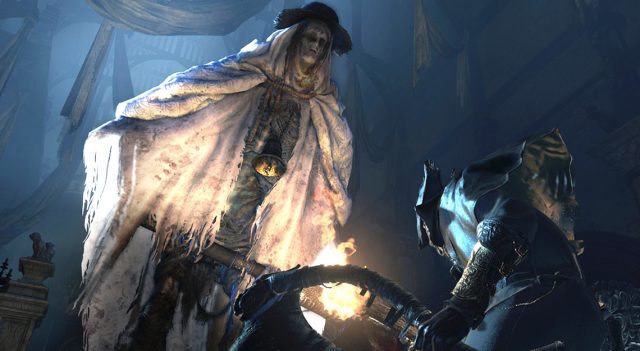 That Is Not Dead Which Can Eternal Lie

The city of Yharnam and it’s surrounding areas are beautiful – albeit in a twisted, almost fiendish way. Fans of H.P. Lovecraft are in for a treat, as the world of Bloodborne is sprinkled with references to unholy rituals, pagan gods, and eldritch horrors from beyond the stars.

The creepy atmosphere in Bloodborne is second to none, and despite not being a horror title, this is one of those rare games that gets Lovecraft so, so right. What you DON’T see is truly terrifying, and is better left unseen – or worse, to the imagination.

This ties in perfectly with Bloodborne‘s narrative – or rather lack of. Players will need to piece together a cohesive story on their own, from bits of lore scattered all about in various forms. The world is rich with detail, and players who want to soak in all of it must pay attention to every conversation, read just about every bit of text in the game, and perhaps most importantly, observe their surroundings.

Compared to many games these days (even well-written ones) that tend to spoonfeed the plot to the player, this is a welcome change, and serves as an excellent way to keep the player curious and engaged. In some ways, Bloodborne is a throwback to the puzzle games of yore where, short of reading a walkthrough, players were expected to figure out everything on their own. Make no mistake: Bloodborne is tough. You will fight, and you will die – many, many times. But dig deep enough, and you will find an extremely rewarding challenge. It bears many similarities to it’s predecessors – some say too many. However, I see it as a refinement of the Souls series, as a distillation of what made these games great in the first place.

Perhaps the emphasis on blood in Bloodborne is an allegory for what hardcore Souls fans crave, and FROM Software have simply delivered it in copious amounts. Or perhaps I am just reading a little too much into things.

See you in the Hunter’s Dream.

That’s right, we’re also giving away a PS4 copy of the game to a lucky gamer in Singapore, via our Instagram post. Be sure to take part before 23:59hrs on 4th April:

Like it’s predecessors, Bloodborne borders on being sadistic with its near-vertical learning curve. But go at it hard and long enough, and you will peel away it’s tough exterior to find a true gem. Games like this may be an acquired taste, but let’s face it – do you want to live forever?