Apprehension was the emotion that crossed my mind as I collected my 3D glasses just prior to the screening of 47 Ronin. As much as I love a Keanu flick, you cannot discount the fact that first impressions of the movie comes across as the typical ‘white-man-saves-native-people’ trope in the same vein as Dances with Wolves and The Last Samurai.

I mean, looking at the theatrical poster for 47 Ronin, who takes up the bulk of the real estate of the canvas? 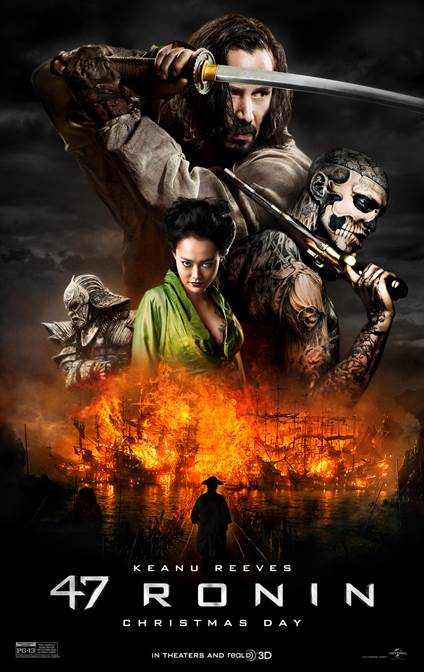 The true hero in the movie would be Kuranosuke Oishi, portrayed by Hiroyuki Sanada, who leads the rest of the masterless Samurai in avenging their daimyo‘s honour. Guess where is he in the poster ? He’s the lone silhouette just above the title. Things were not exactly perfect until the reel started to roll.

47 Ronin takes its time to build up the rich backstory to how the Ronin embarked on their journey of revenge. A very rare approach that is found in modern day cinema. The movie could have done more to add more context to why the Ronin just had to avenge their master due to the cultural context. After all, the movie is marketed largely towards a more western audience, so I reckon not everyone would really know why were things done in such a manner back in those days. Unlike Gladiator, the Ronin in the movie had only a week to plot their revenge which marred the initial build up. Sequences were rushed along which would not give the audience enough of an emotional bridge and it somehow lacked urgency as well before the action portions leapt in.

Given the source material, the original Ronin had a good two years of plotting before it was kicked into action. The movie could really have gone to greater length to illustrate how the plan would eventually unfold.

In a nutshell, 47 Ronin is more of a revenge flick packaged with a dash of action. Applause for the director and his team in having to balance the audience’s focus on both Keanu and Sanada. It is never an easy task to juggle between two key characters in the show but the team did pull it off rather effectively.

With so much build up, you would think that there would be plenty of fight sequences to end of the movie with a bang. In what felt like a literal race to the finish, the final fight sequences, could have done with plenty more sword clashing and bloodshed.

I was hoping for a 300 but all I really got was 47. I guess numbers really do play a big part in movies.

The last time we saw Rinko Kikuchi, would be her role in Pacific Rim. Comparing between these two roles, I largely prefer to see her in a more ditzy role. Having seen her initially in Pacific Rim sets much of the foregrounded impression. Good effort in trying out the sexy seductress role.

Perhaps it really has to do with the number of Japanese faces in the movie, if only the movie was entirely in Japanese with subtitles, it would make the film more awesome overall.

Having entered the cinema apprehensive, I left satisfied but craved for seconds. More please?