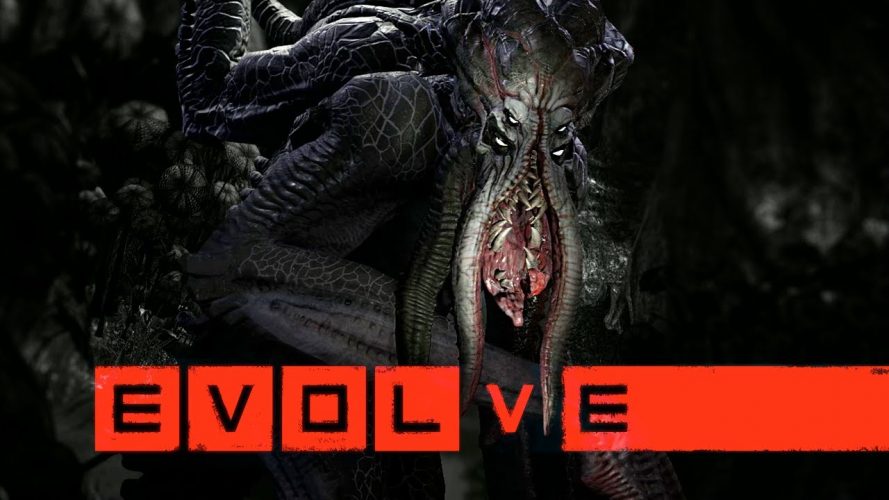 When Kraken, the 2nd playable monster in Evolve was revealed at E3 earlier this year, I could barely contain my excitement. While his predecessor Goliath has certainly made an impression as an unstoppable engine of destruction, Kraken looked to be something else entirely. A monster that relied more on finesse than brute force? Sign me up!

There is no Team B

Before we get to Kraken though, let’s talk about the new team of hunters. The previously revealed team of 3 men and a lady, while extremely capable in the right hands, felt rather generic precisely because they fit into their respective archetypes so well. The classes played exactly as you would expect them to, and while that isn’t a bad thing in itself, I was expecting something a little more unique in a game called Evolve.

Enter the new team, who are about as far removed as possible from the previous group of hunters. These 4 have a suite of new weapons and abilities that have completely turned the team dynamics on it’s head – one of them isn’t even human, but a robot instead! And at 2K Games’ recent press preview, I got an opportunity to take them all for a spin.

Hyde, the new Assault soldier, packs a powerful flamethrower alongside his minigun, and is perfectly suited for players that love to get up close and personal with the voracious wildlife on the planet Shear.

If I may digress a little, one of the first things I noticed is that the local flora and fauna have been amped up significantly; various carnivorous beasts travel around in packs, and will pursue players relentlessly.

During previous demos, the hunters could largely pay no heed to most aggressive wildlife, and Turtle Rock Studios have clearly caught on to that and made the environment a lot more unforgiving. Expect to be fending off predators almost constantly while on the move when playing as the hunters!

As the new Trapper, Maggie brings along a partner into battle – a little beastie named Daisy, who can track and pursue the Kraken independently. She also carries a formidable set of harpoon traps, which are incredibly good at immobilizing the monster when laid out strategically.

While the individual harpoon lines can be broken quickly, spearing the Kraken with 5 harpoons from multiple directions can allow the hunters to do some serious damage in the few seconds it takes the monster to break free. I expect Maggie to be a lot more popular with players than Griffin (the first Trapper to be revealed) for this reason alone.

The most striking newcomer, Bucket is a robot in the Support role who can detach his own head and use it as a UAV to track down the monster. As useful as it sounds (and it is!), Bucket himself is immobile while the UAV is active, and the rest of the team is usually faced with a dilemma as a result. Should they follow behind the UAV as it seeks the Kraken, or should they stick close to Bucket’s body to protect him from whatever is skulking around in the shadows? Do they split up, or stick together?

By conventional logic, the right choice would be obvious, but with the hunters essentially racing against time to take down the monster before he grows too powerful for them, the best course of action may not be that apparent. Adding on to the unique dynamics is Lazarus the Medic, who fulfills that role in his own strange way.

As the developers would say, Lazarus is “only too happy to let you die”, and it shows: Equipped with a long-ranged silenced sniper rifle, Lazarus stays as far away from the action as possible. He’s really more of a “reviver” than a healer – his personal cloaking field and Lazarus device allow him to sneak past the monster undetected and bring incapacitated (and even dead!) players back to life… at his own discretion.

The first few games I played, the hunters got stomped every single time. The new abilities and team dynamics definitely took some getting used to, even among fellow journalists who already have some experience with the game.

After a few false-starts though, the hunters were working together flawlessly – as always, communication among hunters is key, and the rush I felt while taking down the monster in a coordinated attack with my team-mates is exactly what sets Evolve apart from other co-op shooters out there. With 2 hugely-successful Left 4 Dead games under their belt, Turtle Rock Studios clearly understands what makes a co-op game great – this is apparent in the level of quality and sheer fun factor displayed in Evolve so far.

But enough about the hunters, Kraken easily steals the show. With limited flight capabilities and a variety of ranged attacks at his disposal, Kraken is a far cry from the in-your-face antics of Goliath. Kraken relies heavily on hit-and-run tactics, and his ability to fly over short distances is absolutely vital to his survival, as he is nowhere near as tough as Goliath.

Almost all of Kraken’s offensive options are ranged, and this actually gives him a significant edge when hunting for prey. With Goliath, it is difficult to go after big game during the initial phase of the game, as Goliath’s playstyle virtually guarantees that he will take damage in the process.

Kraken, however, can actually take on tougher wildlife right off the bat, in greater numbers, and remain unharmed at the same time by staying airborne. This, in turn, allows Kraken to go after high-value prey and evolve at a much faster rate than Goliath.

This does not imply that Kraken feels unbalanced. With his weaker constitution and greater reliance on abilities, Kraken needs to be able to evolve rapidly in order to level the playing field against the hunters. Along with flight and basic projectile attacks, Kraken has a well-rounded set of abilities that can be used both offensively and defensively.

My personal favorite was the Lightning Strike – Kraken charges up for a couple of seconds, then unleashes a directed blast of electricity at the target area. It does really good damage within a small radius, and players with good aim will likely get the most bang for their buck with Lightning Strike, especially since hunters tend to cluster together while in pursuit of Kraken.

Other useful applications of Lightning Strike include taking down a hunter as bait, then dropping it on the downed hunter when other players move in to revive him in order to maximize damage. As mentioned before, Kraken is designed for players who prefer to play smart rather than hard, and I really enjoyed being able to employ my powers in a creative manner.

Sneakier players will appreciate the Banshee Mines, which Kraken can drop in clusters of 3. The mines emit a high-pitched scream and home in on the closest enemy within a radius, and while they can be shot down before impact, the importance of having Banshee Mines present on the field cannot be understated – for one, they divert the hunter’s attention and firepower during a battle, which is always helpful due to Kraken’s relative fragility.

Clever players will place Banshee Mines in optimal positions to throw off pursuit, and hamper the hunters’ efforts to track Kraken down by making them check cautiously around every corner and blind spot for errant mines.

The Vortex is probably the most well-rounded ability for Kraken. Essentially a concentrated wave of pure force, it tosses hunters off their feet and throws them back quite a distance while inflicting some minor damage. I found it extremely useful for shaking off hunter pursuit, especially in tight corridors where it was almost impossible to dodge the Vortex. During one of the games I played, I successfully kept the hunters bottled up in a tunnel for several minutes through the usage of Vortex and Banshee Mines, until they finally retreated to take an alternative path.

In an up-close situation, the Vortex is critical for putting some distance between Kraken and certain hunters, such as Hyde with his short-ranged flamethrower, and Maggie with her Harpoon Traps. Unlike Goliath, Kraken does best when engaging enemies at mid to long range, and the Vortex is perfect for keeping overly-aggressive hunters at arm’s length.

Kraken’s final ability, Aftershock, is in my opinion the least practical. Kraken is rendered immobile for a good 3 seconds or so, then unleashes a wave of electricity in his immediate vicinity.

While it does some massive damage when it connects, Aftershock runs contrary with how Kraken should be played; staying in close proximity to hunters or hostile beasts is probably the last thing you want to do.

The fancy charging animation is impossible to miss, and hunters will more than likely escape the area of effect while taking the prime opportunity to deal big damage to a stationary Kraken. I’d say Aftershock definitely needs some improvement before discerning players will pick it over the other 3 abilities. Perhaps the charging time can be reduced along with the damage to balance things out.

Overall, Evolve is shaping up very nicely. The visuals and atmosphere have gotten a significant tune-up from the previous build, and with 1 more monster and another team of 4 hunters yet to be revealed, I look forward to even more surprises down the road. Evolve looks to be living up to it’s namesake as a game that will bring the co-op shooter genre forward with it’s unique take on asymmetrical multiplayer, and I cannot wait for the final product to be released on 21st October. Watch out for our full review of Evolve on Geek Culture later this year!

Update 6th August 2014: We received news from official sources that Evolve’s release date will be delayed to February 10th 2015.

Start off your Back 4 Blood experience with knowledge and tips.

Master the deckbuilding elements and be better.