Magic: The Gathering players have been joking since 2020 that the logical progression of Double Masters would be Triple Masters. Alas, Double Masters 2022 will not have 3 Rare/Mythic slots per pack, but is still guaranteed to reprint some highly sought after cards that should fit right into your Modern, Legacy or Commander decks.

This is a big release for 2022, and Wizards of the Coasts has kindly provided Tap & Sac and Geek Culture with an exclusive preview card, and it’s a Mythic Rare featuring none other than the iconic, big-baddie Planeswalker of Magic itself — Nicol Bolas, God-Pharaoh!

The art featured here by Raymond Swanland is the same as its original printing in Hour of Devastation, with Nicol Bolas casting a dominating figure over his domain of Amonkhet. Its 7-Mana cost makes this version of Nicol Bolas a little less popular, but once you get it on the board, your opponents will suffer dearly, much like the enemies of Nicol Bolas. Here’s a tactical rundown of his (overpowered?) Planeswalker abilities.

Cast a Free Spell Off the Opponent’s Library

Nicol Bolas, God Pharaoh’s 1st ability lets you pick an opponent, who will then Exile cards off the top of his/her Library until a non-Land card is revealed. This is where it hurts: you can cast it for free under your control.

Imagine stealing your opponent’s big Creature like Jin Gitaxias, Core-Augur or Craterhoof Behemoth, or a big Sorcery such as Ruinous Ultimatum, while increasing the Loyalty counters on Nicol Bolas. That 7 Mana would start to feel like it was worth the cost.

Unfortunately there’s high risk when you want a high reward. You don’t really know what’s lying on the top of the opponent’s Library and could very well hit a redundant Sol Ring or a low-powered Creature like Llanowar Elves – that would be just as sad as melted ice cream.

Exiling Not One, But Two Cards From Each Opponent’s Hand

In our opinion, this is a much wiser choice for your first Planeswalker activation after casting Nicol Bolas, God-Pharaoh. It specifically calls for each opponent to Exile 2 (not 1) cards from their hands. In a Commander game with 3 opponents, that’s 6 disappearing cards that will no longer bother you for the rest of the game.

Although this ability only adds +1 Loyalty to Nicol Bolas, the value here often outstrips the first +2 ability, simply because you might get very little out of it.

Some opponents will start emptying their hands by quickly casting all their spells and Creatures onto the Battlefield, nullifying the effectiveness of this Nicol Bolas ability, but that’s not particularly bad for you. An empty hand means opponents are pretty much playing off the top of their Library while you retain control.

It can’t always save you though, since dealing with just 1 target doesn’t work so well when the opponent has an army of 2/2s or a bunch of 3/3s. Nicol Bolas doesn’t have a way to sweep the board unlike the Planeswalker Chandra, the Awakened Inferno.

Bottomline is, if you’re casting Nicol Bolas, God-Pharaoh with no extra Mana available to deal with multiple threats, then it’s best to have a healthy backline of Creatures to serve as blockers for the Planeswalker.

The Ultimate End of the Game

This is what all Magic players want to attain in games – activating the last and ‘ultimate’ ability of Planeswalkers!

Nicol Bolas, God Pharaoh’s ultimate ability is an astounding -12 Loyalty cost, but it does start at 7 Loyalty counters, and even has a +2 ability to speed up the process. It really is no different from other Planeswalkers that cost less to cast but also take 3 turns to gain enough Loyalty to reach its ultimate activation.

Once Nicol Bolas’ ultimate ability goes off, each opponent Exiles all their non-Land permanents. This is a one-sided annihilation and would normally spell the end of the game since your opponents will have no hand, plus nothing on the Battlefield! Your stuff, on the other hand, are still intact.

Magic just wouldn’t be the same with its iconic archenemy, and it’s nice to see Nicol Bolas return for Double Masters 2022. Although it is very expensive to cast, you get a huge payoff once you activate his abilities. Keep it alive and you can even win the game!

Double Masters 2022 is a set catered to more experienced players with high-value reprints, so expect prices of boxes and booster packs to be higher than regular Standard sets. They’ll still be available in Draft and Collector packs, but there are no Set booster packs. 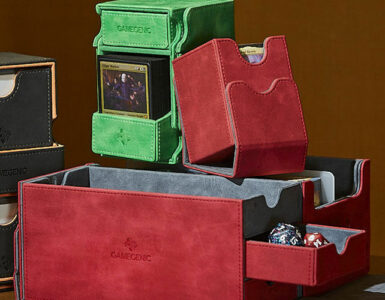