Hours after I left the cinema hall from Power Rangers and as I begun the review to Saban Entertainment and Lionsgate’s latest reboot of the super sentai/American-kid’s-show-rewritten-and-redubbed-TV-series, I was reminded of the Mighty Morphin Power Rangers: The Fighting Edition game for the Super Nintendo Entertainment System. It was fun, brainless, and a good stress reliever and best of all, it didn’t take that long to get to the meat of the action.

Now imagine if that meat was waylaid by a ton of possibly-useless static cutscenes, with meandering slow-scrolling text to justify each Zord and monster’s reason for fighting each other. That pretty much sums up the first hour of this Power Rangers reboot, such that you wonder why it’s even there in the first place. 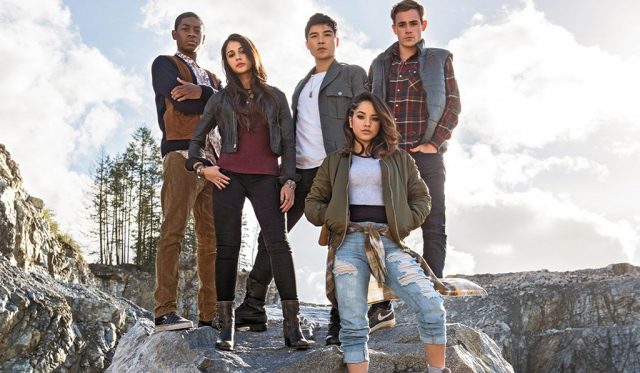 But we’re getting ahead of ourselves.The 2017 Power Rangers film hits an almost similar beat with the 90s TV show, not that we’re complaining. Five teenagers get space sci-fi super powers to transform – no wait – morph into space warriors called Power Rangers. Ok, in this reboot, it’s five angst-ridden teenagers (are there any other kinds?) who each get to control robotic prehistoric creatures called Zords that can form into one giant Megazord, to combat giant monster threats summoned by antagonist Rita Repulsa, who may or my not be a former ranger herself.

The new spin and setup is promising. Our five Breakfast Club-esque characters try their best to be anything but stock characters, and they don’t start out as like-minded friends either. Jason (Red) the jock is actually a nice guy, while Kimberley (Pink) is revealed to be a bully of sorts. Trini (Yellow) is a quiet outsider with a secret no one should care about, while Zack (Black) is the Asian wild card with a sad backstory involving an ill family member. The obligatory black kid Billy (Blue) is thankfully not a breakdancer, but is instead the neurotic brains of the group, as well as the one who tries to be the heart of the motley crew. 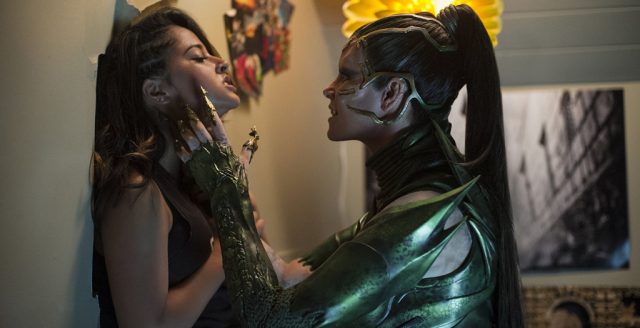 Giant talking head-slash-Power Rangers commander Zordon (played by Bryan ‘I was a Power Rangers villain too’ Cranston) is now reimagined as the original Red Ranger, who wants to hand over galaxy-protector duties to Jason as a way to ease his guilt trip. And the aforementioned Rita (Elizabeth Banks) is his former BFF and original Green Ranger, before she went to the dark side.

The operative word here is ‘try’ because, frankly, the execution is not a smooth metamorphosis. The movie’s dialogue is poorly written, while the direction goes through a checklist of teenager TV tropes, as if the cast of Gossip Girls or Beverly Hills 90210 were forced to churn out a feature-length film. And don’t get me started as to why the movie shifts to oddball nostalgic cheese to cap it all off. It’s hard to be invested when you have cornball lines involving the power of friendship, thrown in together with John Hughes-like teen drama, alongside a giant talking Etch-A-Sketch head and a giant robot made of golden, flowing poop.

The crazy part here is that the aforementioned cheese is the most fun bit about the film. It’s 25 minutes of what you would expect a Power Rangers movie should do: give kick-ass fights involving giant mechanical dinosaurs, with some inventive alien-like Ranger outfit redesigns, rock monsters, and a giant gold winged thing.

Oh, and there’s the climax where the Rangers come together to form the you-know-it’s-coming giant Transformer, to put the beatdown on the big bad of the current arc, complete with a payoff built up from the Rangers’ training montage.

And yes, you do get a Power Rangers theme to remind you that, yes, you’re pretty old.

But we can’t ignore the fact that the tonal shift is bizarre, and that clearly one side of the flick has been given the most love and care. Sadly, it’s not even the fault of the new cast, who tried their darndest to make the script and poor choice of wordplay work. Even the Asian guy who gets the least screentime shines at being the unpredictable wildcard, who takes one of the Zords for a quick joyride. It’s also nice to see Bill Hader play a robot again, since Star Wars Episode VII.

Next From Saban: Big Bad Beetleborgs By Kevin Smith

In the grand scheme of things, I have no idea who this movie is catered for. On one hand, it tries to be a John Hughes teen angst flick, and switches up its stereotypical leads while on the other hand, it’s full of nods to the classic show. In the hands of a better director and scriptwriter, this would fly by just fine but instead, we get a film that drags on for far too long.

Lionsgate is looking for a new franchise and surprisingly, Power Rangers is not a total failure (we’re looking at you Ben Hur) so a sequel is more than likely. But unless something changes, the current trajectory means that the Power Rangers will not be the grandest representation of the franchise, especially when compared to other 90s properties getting a rethread from the unrealistically demanding Hollywood.