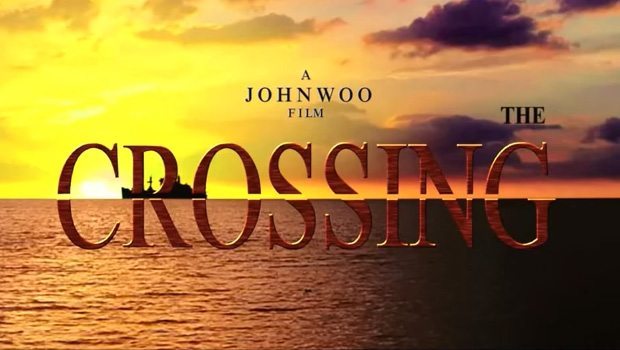 This review obviously contains spoilers, since the movie contains completely made-up stories besides the historical fact that the steamer Taiping did, in fact, sink off Shanghai on 27 Jan 1949. In any case, it’s only the first half of a movie.

About a month ago, I was looking through the drinks menu of the Blue Frog bar during Happy Hour, in Beijing’s Sanlitun Taikooli area, with a Belgian friend who’s been living there since the 1990s. I made a side observation that the cocktails were listed “in alphabetical order … almost”. And his acerbic reply was, “In China, it’s the ‘almost’ that kills me, everytime”.

China’s epic movies have come a long way, but there are still some rough edges and that remains true despite the multinational effort behind this particular film. Just take a gander at the very first thing you see – the clumsy stop-motion-like animation of the giant production house Beijing Galloping Horse – and you can reliably predict that in so many different ways, this movie is going to be awesome … almost.

Just like the title. People have been comparing this story to the Titanic because both were major historic passenger ship tragedies, but this movie isn’t about the ship. It’s about three love stories concerning six people who (mostly) got on board. It deals with cross-strait relationships, about what the steamer Taiping represented before its sinking, plying the Shanghai-Keelung route. And the English and Chinese titles both reflect that, clearly drawing a distinction and differentiating The Crossing from that Atlantic disaster movie … almost.

In a similar vein, the themes of this production are not quite Asian, but palpably more internationalised. Despite the largely East Asian dialogue (Mandarin, Shanghainese, Taiwanese, Japanese) this movie also oozes the sort of wartime flapper-style libertine decadence and high society insouciance that the 1940s Shanghai setting affords, thus achieving a happy marriage of audience sensibilities … almost.

How does one review only half a movie?

Well, first of all, there are all those tiny potential clues and fragments that could well be motifs, but you have to ignore them unless they come back in Part 2. Fragments like flowers growing amidst a field of corpses, that stolen bottle of salt, and possibly even the quasi-fetishy, near-obsessive focus on a pair of plain, pure-white, possibly-anachronistic high-heeled shoes. 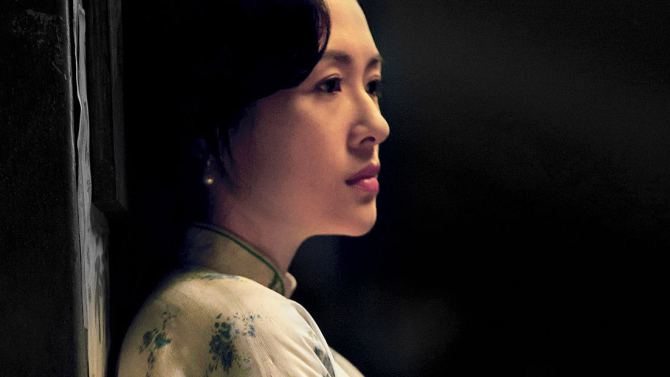 Even if some character arcs appear completely fleshed out by half-time, you’ll never know what sort of late-game shenanigans will change the result. Bowie Lam’s keen portrayal of Song Hye-kyo’s creepy cousin, for example, seems fairly two-dimensional until a last-minute possibly-significant u-turn when his camera serendipitously snaps her husband Huang Xiaoming’s distant photobomb. That was right before the John Woo Fashion Statement moment, when Huang dons a pair of sunglasses. Also, Takeshi Kaneshiro seems totally set up to be the do-gooder type, a doctor caught up in conflicts not his own, until he starts coming too close to Song Hye-kyo’s character (doctor-patient disrobing, anyone?) and moves from the Pro Zone deep into the Friend Zone, in the direction of the Danger Zone.

Just about the only thing we know, is that some people are bound for the doomed ship. What happens then, is not revealed in Part 1. And as Zhang bluntly pointed out at the PressCon at the ArtScience Museum, you simply need patience to await Part 2 (significant spoiler: There Be Plot Twists).

And so begins the half-review.

This Movie Doesn’t Know What It Wants To Be

How’s that for a header, huh?

You know this to be true because soundtrack composer Taro Iwashiro manages to showcase his versatility across a huge breadth of musical genres, from a Masacagni/Morricone-inspired oboe solo to New Agey electronica, from channelling Bizet’s Carmen to pulling off a Yanni-mated-with-Zimmer. Once piece even reminded this reviewer of Taku Izumi’s theme song for Taya Tan.

Let’s start with Couple A. The male half is Tong Dawei, who pretty much stole the half-show. He’s a signals sergeant in the Nationalist army, and pays a stranger – Zhang Ziyi – to take a fake family photo in order to get larger rations. He builds a winsome, wistful yarn about his “wife”. Meanwhile, she is a complex, strong survivor type with a lot of well-hidden baggage, seems to be searching for some other yet-unknown possibly-dead lost love and ekes out a living on the mean streets of Shanghai. As Tong explained at the Red Carpet event (which also launched the 25th Singapore International Film Festival), these two characters start out with incompatible motives. Sub-plots include Tong’s wartime exploits, Zhang’s foray into prostitution, her day “job” of volunteer nursing for wounded soldiers, and her one-scene friend in a deep red hat. Well, at least that’s all we see of Carmine Sandiego in Part 1 before she disappears in a riot of cops and showgirls.

In Couple B, Huang Xiaoming stars as a rakish young soldier who fought his way through wars and up the ranks to having two stars on his epaulettes. That’s Nationalist army stars, mind you. Not the Communist ones where everyone has a star. Despite a wounded leg, he ambushes, waltzes and romances a barefoot Song Hye-kyo, breaks the class boundary to marry her, and then continues to make war as she gets shipped off to safety in Taiwan. He is also somewhat autobiographical and channels John Woo himself. Sub-plots include the fact that Huang stars as Tong’s military super, some Hokkien comic relief, and a potential scandal in Taiwan as Song is treated for snakebite by Aniki J- … sorry, Kaneshiro while she coincidentally occupies the abandoned former home of Masami Nagasawa. 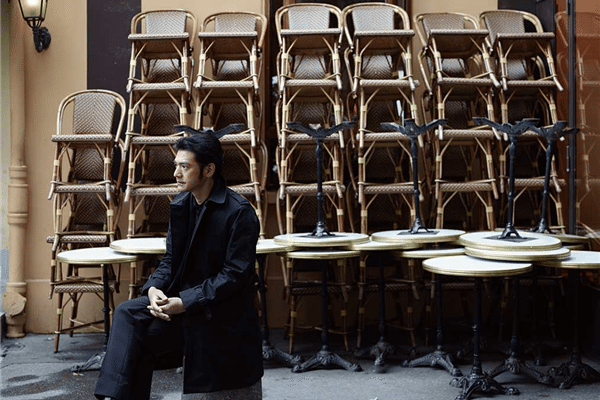 Finally, there is Couple C. Nagasawa is clearly Kaneshiro’s childhood Female Love Interest although it is never clear whether they married or at least had some sexytime. In fact, we don’t even know if she is actually alive, such is the power of flashbacks. We just know they kissed. As teenagers. In the rain. Sub-plots include conflict with Kaneshiro’s mother who is concerned about the cross-cultural Sleeping With The Enemy potential of her son’s affairs, and burns all of Nagasawa’s letters to Kaneshiro.

If all this sounds confusing, remember that there are even more sub-plots, all within the first half of a movie, which at nearly two hours is already longer than many full movies. Thankfully, there isn’t as much flowing water imagery here so it won’t tax your bursting bladder as much as James Cameron’s movie did.

Not Sweating The Small Stuff

We know the grand sweep and epic scale of this movie. But there are times when the film screams “limited budget”. It’s not just the painfully-visible contact lenses worn by at least two of the main cast members. The CGI was galling enough for movie reviewers (seated beside this one) to loudly bemoan once the credits started rolling. It wasn’t just the CGI-heavy battle scenes. The blood spatter was so bright red as to almost become Pythonesque. The smoke sprites were pretty blocky. Snowflake swirls were too basic for a post-Frozen release. And if that sounds bad, wait till you see those seagulls (available in full glory in the trailer). But …

… Oh, look! There’s lots of good stuff too! Erm … right? After all, all that budget had to go somewhere, right? The big star, Zhang Ziyi, now looks different. She now looks her actual age, adjusted for East Asian looks (LOL). Gone is the naive teenager of The Road Home. Here is an adult, long of face, with some gravitas in the jowls, looking dignified and channelling Joan Chen and Michelle Yeoh – but only for the movie, it seems (she looked her usual stunning self at the PressCon and on the Red Carpet). Here is a former starlet making the transition from hot superstar to, well, subtle immortality. Her character’s scripting does seem conflicted, in an extended hooker-with-a-heart-of-gold trope decorated with Asian-flavoured bells and whistles.

Kaneshiro’s character is similarly built, a generic good guy model spiced up by some homely Hokkien dialogue, and bits of Japanese too. Huang’s soldier-soldier is yet another relatable character sprinkled with furikake. In this case, the John Woo Heroic Bloodshed trope.

The script has its shining moments too, especially for Tong Dawei. His immensely likeable face and deadpan innocent delivery were perfect for the character he plays, one who exudes simplicity and conceals a ton of wit and cunning. While his role is more taxing in delivery, it is Huang whose acting and facial muscles are stretched quite a bit, from pouting, sobbing, roaring, schmoozing, flirting, the works. He’s the smoothest guy burdened with the most awkward scenes. Especially that scene with The Jeep That Didn’t Flip.

Because all other jeeps ended up somersaulting in battlefield explosions. If the ballistic shootout is a John Woo trademark, the war scenes are the Empress Dowager of ballistic shootouts, involving rifles, machine guns, stick grenades, suicide-IEDs, tank shells, shoulder-launched rockets, and one extended moment featuring a Bangalore torpedo.

Putting The Pieces Together

This film is littered with too many pieces of debris, any of which could turn out to be Chekov’s gun in Part 2, but most of which are likely to be duds. But we are left with a (red) cliff-hanger until the second instalment comes. Until then, we will never know. But when will “then” be “now”? Sooner than the next Star Wars movie, it seems – Part 2 is scheduled for Q2 of 2015.