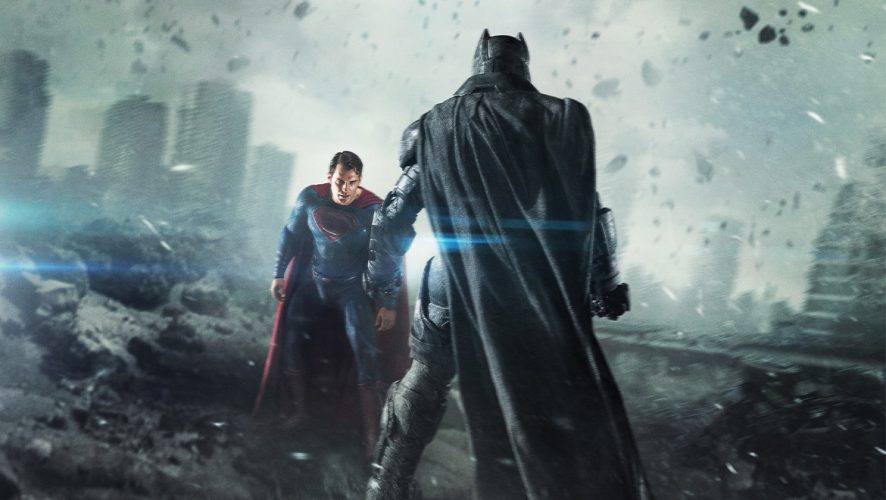 No one needs yet another rendition of the day Thomas and Martha Wayne died, but Zach Snyder ties this death, which kicks off the movie, neatly into the premise of Batman v Superman: Dawn of Justice.

And towards the end of the movie, you get the feeling that after all the negativity concerning Man of Steel, Snyder finally gets the heroes that he is bringing to the big screen, and is somehow trying to resolve loose threads, to give this movie greater focus.

Which he does for the most part, and that is good enough for me.

The premise of BVS:DoJ is a weighty one. On the surface, it addresses one of the long held arguments in comic book fandom, of who would win in a fight between the Batman and Superman. Man vs alien. Human versus superhuman. On the studio side, BVS is meant to do what MOS failed to do, which is to kickstart the DC Cinematic Universe, to match that of the Marvel Cinematic Universe.

Marvel has several films under its Phase One series, whereas BVS is meant to be Phase One for DC. This explains the hurried introduction of so many characters, including Wonder Woman, The Flash, Aquaman, Cyborg, Lex Luthor, Steve Trevor, Darkseid, parademons and STAR Labs.

If you’re not a comic book fan, all of the above mentioned will be confusing because Diana Prince is not identified as Wonder Woman, Amazonian Princess. Neither is Barry Allen, Arthur Curry, Victor Stone or Apokolips, when they make their appearances.

But if you are familiar with the DC Comics Universe, you will get a deeper appreciation of the world building that Warner Brothers is finally crafting, even if it is trying to do it in less than half the time required.

Think of this as a comic book event a la Final Crisis or Marvel’s Civil War, and BVS is the first chapter. Some things that are hinted at or shown in the first issue will only be addressed in later chapters. But there’s enough here to make me want to pick up the next issue. 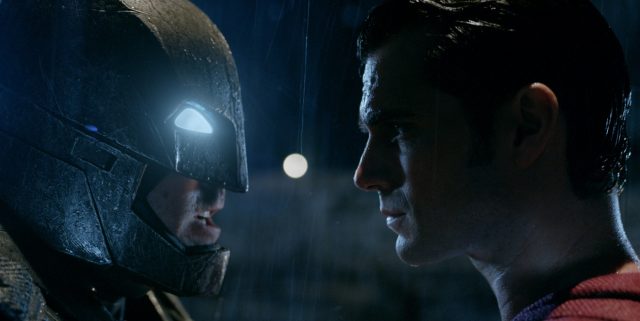 And what better way to kick things off than with the DC Trinity, of Batman, Superman and Wonder Woman. 18 months after MoS, Superman has been heralded as a saviour, but some have started to regard him with contempt, mainly due to the global destruction caused by General Zod, and the loss of lives in Metropolis.

One of them happens to be millionaire Bruce Wayne, who witnesses the deaths first-hand, and has vowed to put a stop to it. After battling the criminal elements as Batman for 20 years, he has moved on from saving Gotham City, to saving the world from a potential alien menace.

Ben Affleck’s Batman, or Batfleck, as fans prefer to call him, is an amalgam of many different Batmans, from the comics and the movies. He has the brilliance and tactical mind of comic book Batman, the wonderful toys from the movie Batman, and the relentless, arrogant son of a bitch characterisation from Frank Miller’s The Dark Knight Returns comic book series.

Affleck has a touch of Christian Bale’s Batman to him (except for the bit where Chris Nolan’s Batman stops being the Dark Knight for eight years), that he’s only human and well aware of it, and is doing his best because he thinks he’s the only one who can.

For reasons unknown, he has been tracking a criminal mastermind which leads him to Lex Luthor, and his first confrontation with Clark Kent and Diana Prince.

Henry Cavill’s Superman might have saved the world, but another international incident, which led to the deaths of many, is now pinned on him and naively, Superman confronts the issue, believing that he did the right thing. This slightly stubborn streak has him even deciding that taking down the Bat vigilante would somehow make others see him in a new light.

All this leads to a final confrontation between Batman and Superman and despite what the trailers might indicate, this battle only takes place in the third act.

In the meantime, Holly Hunter gives an amazing, nuanced performance as a senator investigating Superman, but is somehow on his side. At the same time, she is also trying to determine if Lex Luthor’s recent gambits are as innocent as they seem.

Yes, there is a lot going on in this 152 minute film, and this includes the foreshadowing of Darkseid and his parademons. Those unfamiliar with Apokolips will find the pacing of some to be slightly off, and even unnecessary, as there is no payoff for many of the reveals in the film. This is not helped by the dream sequences that Bruce Wayne has of his confrontation with Superman, which includes flying creatures and bleeding tombs. But that is the way comic books have been crafted, as fans would know that the payoff will come later.

It’s like watching the two-part Harry Potter, Hunger Games and Kill Bill films – you just have to accept that some elements are merely being introduced but the resolution comes in the next movie. Maybe.

Like the scene where a masked man appears to be addressing Bruce Wayne with a warning about the future. Regular movie fans won’t know who he is, but if you know the history of The Flash, you know that he can travel through time and has, on occasions, gone back in time to send warnings.

The mysterious underwater man carrying the trident? I’m surprised that the immortal Wonder Woman doesn’t recognise Aquaman, or did she?

And watching Joe Morton trying to save his son, Victor Stone after the terrible accident? That’s one of the best easter eggs in the movie. 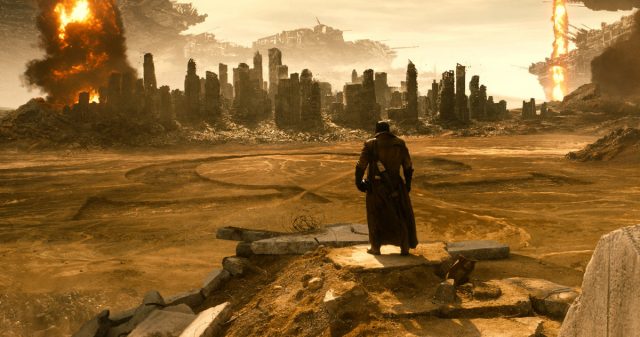 When the final acts finally lands, Lex has revealed his hand and pits the big two against each other. On the surface, it felt as if he orchestrated the whole thing but really, it’s more of Lex taking advantage of the situation to get rid of either one, or both heroes. And that’s the insane brilliance of Lex Luthor.

But for the love of god, stop casting Jesse Eisenberg as anyone in any movie. That snarky, fast talking know it all from Zombieland, Now You See Me and The Social Network? It’s the same guy here, but now evil, and with an annoying twitch each time he comes on screen. His Lex Luthor may be evil, but he is not a memorable arch-nemesis. But for what he did, he is definitely someone without Mercy.

Amy Adams as Lois Lane does not fare any better either. Though she is depicted as being smart and capable, she played the damsel in distress twice in the same movie. I’m sorry but is she trying to match the saved-by-the-hero record set by Kirsten Dunst in the Sam Raimi Spider-Man movies?

The breakout star here is definitely Gal Gadot, but that is also because we haven’t seen Wonder Woman on the big screen before. Her turn as Diana Prince is as elegant as she is deadly, and there is just enough set-up here, to make me want to watch her standalone Wonder Woman movie directed by Patty Jenkins.

As for the results for the battle, I cannot say that I agree with all of Snyder’s choices. At times, his Batman seems to rather emotional and overly judgemental. As for Kal-El, it’s probably Cavill here more than anything, but his Superman is still rather pompous.

But just as I am not a fan of every element and depiction in The Dark Knight Returns, I cannot deny that the overall movie works. 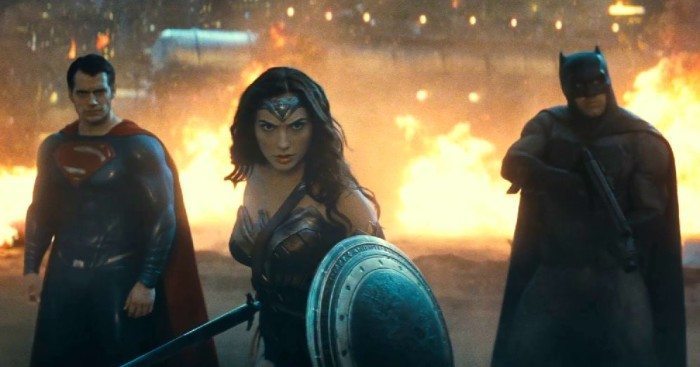 Yes, as seen in the trailer, Snyder is still a fan of destroying large, populated cities but at least this time, he addresses the destruction of Metropolis by having Superman first try to take the fight into space. Does it automatically excuse MOS? Not really, but it is nice to see our heroes, including Batman and Wonder Woman, recognising the consequence of their actions.

There is a level of darkness and brooding here that I’m still not a fan of, and part of it also has to do with the darker palette that Snyder prefers to employ while filming. The sombre mood present throughout most of the movie gives the film an unnecessarily darker tone than required. Add in the rather generic special effects sequences towards the end and the film can easily spill over into the CGI laden explosive rubbish that Hollywood seems to love to make these days.

Now that we’ve seen the dark and gritty, it is time for some hope and light. Snyder seems to have held out for some hope here, and maybe, he now simply needs to see the light.

Batman V Superman: Dawn of Justice tries very hard to be a faithful comic book adaptation, not with any one story, but in projecting the true, shared universe concept of bringing the different heroes together. In doing so, it will alienate non fans but for comic book fans, it is something we’ve grown accustomed to. The set up for something incredible is in the works, even if this execution is more of a blunt instrument.